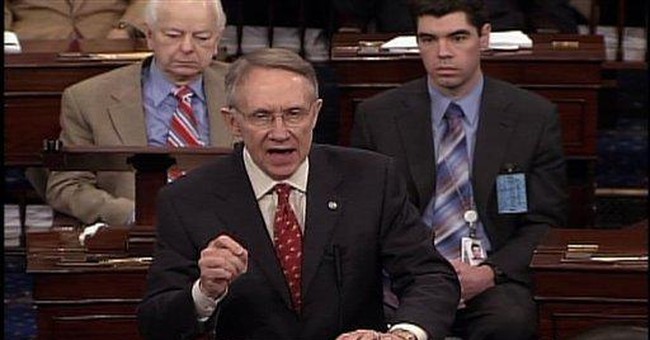 WASHINGTON -- The United States has fought many wars since 1941, but never again declared one. Abroad, no one declares war anymore either, perhaps because it has the anachronistic feel of an aristocratic challenge. Whatever the reason, today Congress doesn't declare war; it "authorizes" the "use of force."

In October 2002, both houses of Congress did exactly that with open eyes and large majorities. Sen. Jay Rockefeller, a Democratic member of the Senate Intelligence Committee who had access to all the relevant information at the time, said, "I have come to the inescapable conclusion that the threat posed to America by Saddam's weapons of mass destruction is so serious that despite the risks -- and we should not minimize the risks -- we must authorize the president to take the necessary steps to deal with that threat."

Now, more than four years later, the Democrats want out of the resulting war. Most, such as Rep. John Murtha, want to do so for a simple reason: They think the war is lost. If you believe that, then getting out is the most reasonable and honorable and patriotic policy.

Congress has the power to do that by cutting off the funds. But Democrats will not, because it is politically dangerous. Instead, they are seeking other ways, clever ways. The House is pursuing a method, developed by Murtha and deemed "ingenious" by anti-war activist Tom Andrews of Win Without War, to impose a conditional cutoff of funds, ostensibly in the name of protecting the troops. Unless the troops are given the precise equipment, training and amount of rest Murtha stipulates -- no funds.

Unfortunately for the Democrats, Murtha is not disingenuous enough to have concealed the real motives for these ostensibly pro-readiness, pro-troops conditions. He has chosen conditions he knows are impossible to meet -- ``We have analyzed this and we have come to the conclusion that it can't be done'' -- in order to make the continued prosecution of the war very difficult, if not impossible, for the commanders in the field.

But think of what that entails. It leaves the existing 130,000 troops out there without the reinforcements and tactical flexibility that the commander, Gen. David H. Petraeus, says he needs to win.

Of course, the Democrats believe that the war cannot be won. But if that's the case, they should order a withdrawal by cutting off the funds. They shouldn't micromanage the war in a way that will make winning impossible. That not only endangers the troops remaining in the field, it makes the Democrats' the-war-is-lost mantra a self-fulfilling prophecy.

Murtha's ruse is so transparent that even Senate Armed Services Committee Chairman Carl Levin, who opposes the war, will not countenance it: "I think that sends the wrong message to our troops."

Levin has a different idea -- change the original October 2002 authorization. "We'll be looking at modification of that authorization in order to limit the mission of American troops to a support mission instead of a combat mission," says Levin. "That is very different from cutting off funds."

While this idea is not as perverse as Murtha's, it is totally illogical. There is something exceedingly strange about authorizing the use of force -- except for combat. That is an oxymoron. Changing the language of authorization means -- if it means anything -- that Petraeus will have to surround himself with lawyers who will tell him, every time he wants to deploy a unit, whether he is ordering a legal "support" mission or an illegal "combat" mission.

If Levin wants to withdraw our forces from the civil war in the cities to more secure bases from which we can continue training and launching operations against al-Qaeda, he should present that to the country as an alternative to (or fallback after) the administration's troop surge. But to force it on our commanders through legalisms is simply to undermine their ability to fight the war occurring on the ground today.

Slowly bleeding our forces by defunding what our commanders think they need to win (the House approach) or rewording the authorization of the use of force so that lawyers decide what operations are to be launched (the Senate approach) is no way to fight a war. It is no way to end a war. It is a way to complicate the war and make it inherently unwinnable -- and to shirk the political responsibility for doing so.