Russia steps back on the world stage 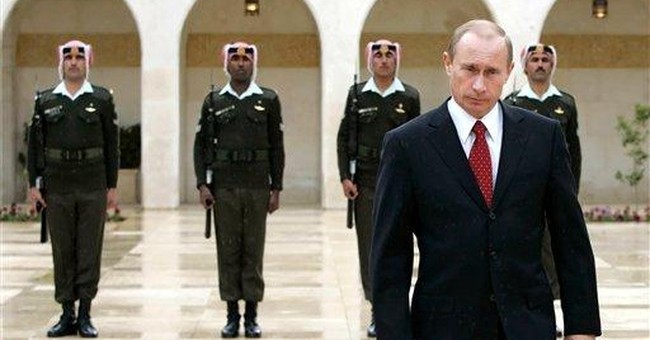 WASHINGTON -- Vladimir Putin -- Russia's president, although the more accurate title would be godfather -- made headlines last week with a speech in Munich that set a new standard in anti-Americanism. He not only charged the U.S. with the ``hyper-use of force,'' ``disdain for the basic principles of international law'' and having ``overstepped its national borders in ... the economic, political, cultural and educational policies it imposes on other nations.'' He even blamed the spread of weapons of mass destruction, which the U.S. has been combating with few allies and against constant Russian resistance, on American ``dominance'' that ``inevitably encourages'' other countries to defensively acquire them.

There is something amusing about criticism of the use of force by the man who turned Chechnya into a smoldering ruin; about the invocation of international law by the man who will not allow Scotland Yard to interrogate the polonium-soaked thugs it suspects of murdering Alexander Litvinenko, yet another Putin opponent to meet an untimely and unprosecuted death; about the bullying of other countries decried by a man who cuts off energy supplies to Ukraine, Georgia and Belarus in brazen acts of political and economic extortion.

Less amusing is the greater meaning of Putin's Munich speech. It marks Russia's coming out. Flush with oil and gas revenues, the consolidation of dictatorial authority at home and the capitulation of both domestic and Western companies to his seizure of their assets, Putin issued his boldest declaration yet that post-Soviet Russia is preparing to reassert itself on the world stage.

Perhaps the most important line in his speech was the least noted because it seemed so innocuous. ``I very often hear appeals by our partners, including our European partners, to the effect that Russia should play an increasingly active role in world affairs,'' he said. ``It is hardly necessary to incite us to do so.''

Soviet foreign minister Andrei Gromyko once boasted that no conflict anywhere on the globe could be settled without taking into account the attitude and interests of the Soviet Union. Gromyko's description of Soviet influence constitutes the best definition ever formulated of the term superpower.

And we know how Putin, who has called the demise of the Soviet Union the greatest political catastrophe of the 20th century, yearns for those superpower days. At Munich, he could not even disguise his Cold War nostalgia, asserting that ``global security'' in those days was ensured by the ``strategic potential of two superpowers.''

Putin's bitter complaint is that today there remains only one superpower, the behemoth that dominates a ``unipolar world." He knows that Moscow lacks the economic, military and even demographic means to challenge America as in Soviet days. He speaks more modestly of coalitions of aggrieved have-not countries that Russia might lead in countering American power.

Hence his increasingly active foreign policy -- military partnerships with China, nuclear cooperation with Iran, weapon supplies to Syria and Venezuela, diplomatic support as well as arms for a genocidal Sudan, friendly outreach to other potential partners of an anti-hegemonic (read: anti-American) alliance.

Is this a return to the Cold War? It is true that the ex-KGB agent occasionally lets slip a classic Marxist anachronism such as ``foreign capital'' (referring to Western oil companies) or the otherwise weird adjective ``vulgar'' (describing the actions of the Organization for Security and Cooperation in Europe, which infuriated Putin by insisting upon a clean election in Ukraine). He even intimated that he might undo one of the unequivocal achievements of the late Cold War era, the so-called ``zero option'' agreement of 1987, and restore a Soviet-style medium-range ballistic missile force.

Nonetheless, Putin's aggressiveness does not signal a return to the Cold War. He is too clever to be burdened by the absurdity of socialist economics or Marxist politics. He is blissfully free of ideology, political philosophy and economic theory. There is no existential dispute with the United States.

He is a more modest man: a mere mafia don, seizing the economic resources and political power of a country for himself and his mostly KGB cronies. And promoting his vision of the Russian national interest -- assertive and expansionist -- by engaging in diplomacy that challenges the dominant power in order to boost his own.

He wants Gromyko's influence -- or at least some international acknowledgment that Moscow must be reckoned with -- without the ideological baggage. He does not want to bury us; he only wants to diminish us. It is 19th-century power politics at its most crude and elemental. Putin does not want us as an enemy. But at Munich he told the world that vis-a-vis America his Russia has gone from partner to adversary.