A Civil War of Words 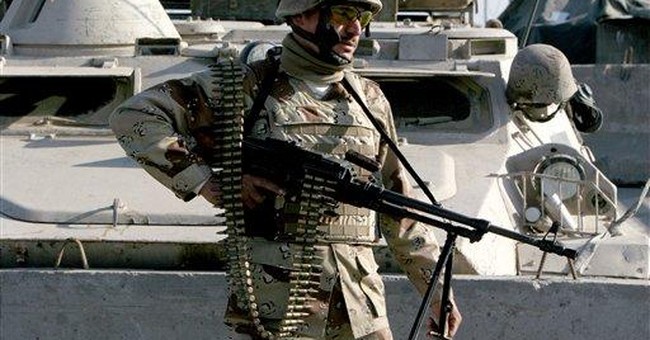 WASHINGTON -- National Intelligence Estimates are not supposed to be amusing. And the latest NIE on the situation in Iraq was uniformly grim. But the document's determined effort to split the difference on the use of the phrase "civil war" did verge on the comical. One can only imagine the interagency wrangling that produced the classic bureaucratic compromise: "The Intelligence Community judges that the term 'civil war' does not adequately capture the complexity of the conflict" but "nonetheless, the term 'civil war' accurately describes key elements of the Iraqi conflict."

In other words: yes, no, maybe. Multiple civil strife, but way too messy to rank with the classics such as America in the 1860s or Spain in the 1930s.

What is striking is how much of the debate in Washington about Iraq has to do with not the war but the words. Who owns them, who deploys them, who uses them as a bludgeon. NBC's announcement last November that it would henceforth use the term civil war -- a statement far more political than analytical, invoking the same fake authority with which the networks regally "declare" election winners (e.g., Florida to Al Gore, Nov. 7, 2000) -- set the tone of definitional self-importance.

Words. We had weeks of debates in the Senate about Iraq. They eventually went nowhere, being shut down (temporarily) by partisan procedural disputes. But they were going nowhere anyway. The debates were not about real fighting in a real place. They were about how the various senators would position themselves in relation to that real fighting in that real place. At issue? With what tone and nuance and addenda to express disapproval of a troop surge that the president was going to order anyway.

When it came to doing something serious about the surge, the Senate ducked. It unanimously (81-0) approved sending Gen. David H. Petraeus to Baghdad to do the surge -- precisely what a majority of the senators said they did not want done.

If you really oppose the surge, how could you not oppose the appointment of the man whose very mission is to carry it out? Yet not one senator did so. Instead, they spent days fine-tuning the wording of a nonbinding, i.e. entirely toothless, expression of disapproval.

A serious legislative body would not be arguing over degrees of disapproval anyway, but about the elements of three or four alternate plans that might actually change our course in Iraq, something they all say they desire. But instead of making a contribution to thinking through how the war should be either prosecuted or liquidated, they negotiate language that provides precisely the amount of distancing a senator might need as political insulation should the surge either succeed or fail.

Words. The Democrats are all in favor of "redeployment" and pretend that this is an alternative plan. But the word redeployment is meaningless. It simply means changing the position of our soldiers and, implicitly, changing their mission. But unless you're saying where you're redeploying to, and with what mission, you've said nothing. It's a statement of opposition, yet another expression of disapproval of the current strategy -- much like an empty, nonbinding congressional resolution -- until you say whether you want to redeploy to Kansas or Kurdistan.

Words. Consider "surge." It carries an air of energy, aggression and even hope. That, in fact, is a fairly good reflection of Petraeus' view of it -- not just more troops but a change in the rules of engagement, with more latitude to fight, less political interference by the Iraqi government and a much tougher attitude toward foreign, especially Iranian, agents in Iraq.

The opposition prefers ``escalation,'' as featured, for example, in the anti-surge commercial that aired in certain markets during the Super Bowl. The main reason for using escalation, of course, is that it is a Vietnam word. And the more Vietnam words you can use in discussing Iraq, the more you've won the debate without having to make an argument.

The problem with this battle over words is that it is entirely irrelevant to what is happening in Iraq. There will be real troops on real missions regardless of what label they are given. The country is engaged in a serious debate about exactly what strategy to pursue to either prosecute the war or withdraw in an orderly fashion. The Senate might consider putting such a debate on its agenda.