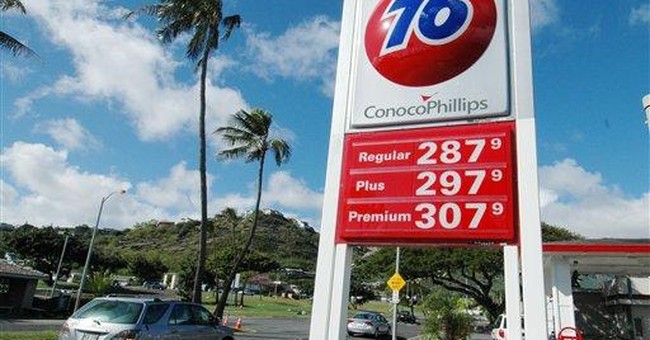 And what does this president propose? Another great technological fix. For Jimmy Carter, it was the magic of synfuels. For George Bush, it's the wonders of ethanol. Our fuel will grow on trees. Well, stalks, with even fancier higher-tech variants to come from cellulose and other (literal) rubbish.

It is very American to believe that chemists are going to discover the cure for geopolitical weakness. It is even more American to imagine that it can be done painlessly. Ethanol for everyone. Farmers get a huge cash crop. Consumers get more supply. And the country ends up more secure.

This is nonsense. As my colleague Robert Samuelson demonstrates, biofuels will barely keep up with the increase in gasoline demand over time. They are a huge government bet with goals and mandates and subsidies that will not cure our oil dependence or even make a significant dent in it.

Even worse, the happy talk displaces any discussion about here-and-now measures that would have a rapid and revolutionary effect on oil consumption and dependence. No one talks about them because they have unhidden costs. Politicians hate unhidden costs.

There are three serious things we can do now: Tax gas. Drill in the Arctic. Go nuclear.

First, tax gas. The president ostentatiously rolled out his 20-in-10 plan: reducing gasoline consumption by 20 percent in 10 years. This with Rube Goldberg regulation -- fuel-efficiency standards, artificially mandated levels of "renewable and alternative fuels in 2017" and various bribes (er, incentives) for government-favored technologies -- of the kind we have been trying for three decades.

Good grief. I can give you a 20-in-2: tax gas to $4 a gallon. With oil prices having fallen to $55 a barrel, now is the time. The effect of a gas-tax hike will be seen in less than two years, and you don't even have to go back to the 1970s and the subsequent radical reduction in consumption to see how. Just look at last summer. Gas prices spike to $3 -- with the premium going to Vladimir Putin, Hugo Chavez and assorted sheiks, rather than the U.S. treasury -- and, presto, SUV sales plunge, the Prius is cool and car ads once again begin featuring miles per gallon ratings.

No regulator, no fuel-efficiency standards, no presidential exhortations, no grand experiments with switchgrass. Raise the price and people change their habits. It's the essence of capitalism.

Second, immediate drilling to recover oil that is under U.S. control, namely in the Arctic and on the Outer Continental Shelf. No one pretends that this fixes everything. But a million barrels a day from the Arctic National Wildlife Refuge is 5 percent of our consumption. In tight markets, that makes a crucial difference.

We will always need some oil. And the more of it that is ours, the better. It is tautological that nothing more directly reduces dependence on foreign oil than substituting domestic for foreign production. Yet ANWR is now so politically dead that the president did not even mention it in the State of the Union, or his energy address the next day.

He did bring up, to enthusiastic congressional applause, global warming. No one has a remotely good idea about how to make any difference in global warming without enlisting China and India, and without destroying the carbon-based Western economy. The obvious first step, however, is an extremely powerful source of energy that produces not an ounce of carbon dioxide: nuclear.

What about nuclear waste? Well, coal produces toxic pollutants, as does oil. Both produce carbon dioxide that we are told is going to end civilization as we know it. These wastes are widely dispersed and almost impossible to recover once they get thrown into the atmosphere.

Nukes produce waste as well, but it comes out concentrated -- very toxic and lasting nearly forever, but because it is packed into a small manageable volume, it is more controllable. And it doesn't pollute the atmosphere. At all.

There is no free lunch. Producing energy is going to produce waste. You pick your poison and you find a way to manage it. Want to do something about global warming? How many global warming activists are willing to say the word nuclear?

So much easier to say ethanol. That it will do farcically little is beside the point. Our debates about oil consumption, energy dependence and global warming are not meant to be serious. They are meant for show.