The Giuliani “Surge” for Afghanistan 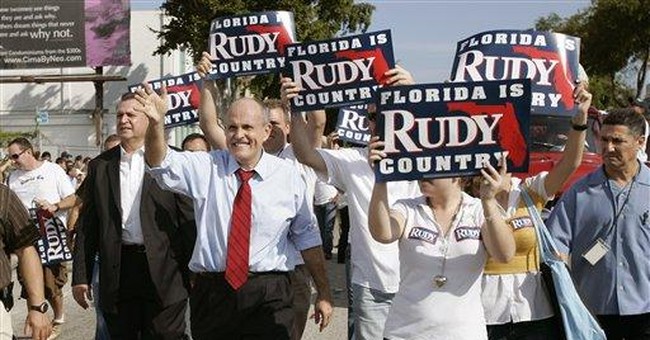 On September 11, 2001, we learned that two oceans are not enough to protect our nation from radical Islamic terrorists intent on murdering us.

Shortly thereafter, our nation went on offense against the Taliban and al-Qaeda in Afghanistan. We swiftly routed them, but in the last 18 months there has been an increase in Taliban attacks, and our initial success in dislodging that regime and making stability possible there is threatened.

To ensure that our successes in Afghanistan are not reversed, Mayor Rudy Giuliani has called for a “surge” in Afghanistan. This would be different from the successful “surge” in Iraq, but it will achieve a similar goal – giving the men and women of the United States military the strategy and resources they need to achieve their mission.

The stakes are extremely high in Afghanistan. Failure to stabilize Afghanistan would provide al-Qaeda with a renewed safe haven, further destabilize Pakistan, and embolden terrorists across the world. It would be a huge defeat in the Terrorists’ War on Us. America can’t let that happen, and Mayor Giuliani is the only presidential candidate to offer a serious plan to ensure victory in Afghanistan.

Last week, the Defense Department said that the United States is considering sending an additional 3,000 Marines to Afghanistan within two months, which fits in with the plan Mayor Giuliani announced earlier this month.

As I mentioned before, Mayor Giuliani’s “Surge” would not simply replicate the strategy successfully employed in Iraq - Afghanistan is a different country whose terrain and situation requires different strategies. Giuliani’s “Surge” refers to a redoubling of efforts – both troops and reconstruction efforts, as we have learned a valuable lesson from our strategy in Iraq: If American troops fight with the correct strategy and adequate resources, we can defeat any enemy, no matter how elusive or fanatical.

Specifically, Giuliani has called for adding three additional combat brigades, all to serve under American command – an increase of some 10,000 troops. As part of this, the U.S. would build up forces in southern Afghanistan as soon as possible – most of the troops would go once the winter of 2009 is over, and when we can commit troops without jeopardizing hard-won gains in Iraq. The U.S. would also encourage our NATO allies to increase their commitment. Working with friendly local allies, these new forces would methodically clear and hold all areas of Afghanistan that are threatened by the Taliban, al-Qaeda, and their allies. This strategy would also focus on containing our terrorist enemies to the south, in the tribal areas of northern Pakistan, and prevent the free flow of terrorists and material across that dangerous, largely-ungoverned border.

Second, Mayor Giuliani recognizes that the Afghanistan campaign’s confusing and duplicative command structure must be reformed. Unity of command is one of the most important principles of modern war-fighting. Part of the reason for the success of the Surge in Iraq is the clear command structure there. Those fighting in Afghanistan deserve to operate under a similarly rational and efficient structure.

The third element of Mayor Giuliani’s Afghanistan “Surge” Plan would focus on rebuilding the country. He proposes to send a newly created stabilization and reconstruction corps – a hybrid of civilians and military personal – to work with the local population to speed up rebuilding and facilitate growth and development.

This new strategy for Afghanistan could take effect in 2009 – if we start gearing up now. Mayor Giuliani’s planned expansion of the Army and reserves by another ten combat brigades would provide part of the new force. Given the necessary lead time to recruit, train and equip these new soldiers, they won’t be ready in time to participate in the beginning of this new plan, but they will be invaluable additions to America’s military, enabling us to defeat our enemies, deter our rivals, and reassure our friends without unduly straining our overall force structure or our military families.

The leading Democratic candidates for president want to pull-out of Iraq and transfer troops to Afghanistan – as if surrendering one country to terrorists in order to fight terrorists in another country is a sensible solution.

Americans deserve a president who offers solutions. This is what separates Mayor Giuliani from the rest of the candidates: He not only identifies problems, but comes up with realistic, straight-forward solutions. That’s leadership. That’s his trademark. And that’s what we need from the next president.