Democrats stay the course despite evidence 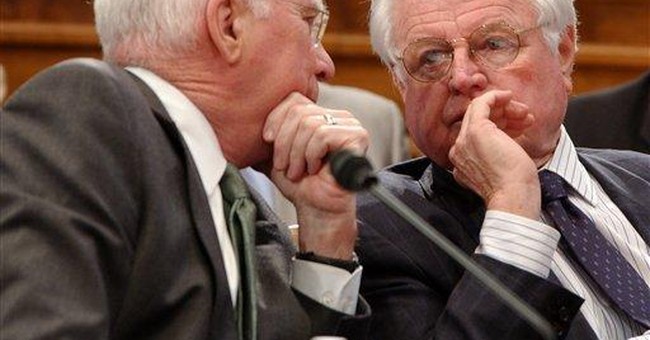 During the last election, Democrats lampooned the “stay the course” philosophy. Rep. Rahm Emanuel, head of the Democrat House campaign, consistently contrasted Republican “stay the course” with the Democrat “new direction.” The criticism arguably stuck. With daily stories of American casualties and sectarian violence in Iraq, most Americans agreed that whatever the current war strategy, it wasn’t working. Democrats didn’t articulate what they would do differently, and they didn’t have to. Vague promises of change were sufficient for voters who knew almost nothing of the war’s details.

The election should educate Republicans to the reality that no policy can be justified merely by precedent; if voters believe—rightly or wrongly—that something is broken, they want it fixed. Unfortunately, on many of the major domestic policy challenges facing America, the Democrat party is slavishly “stay the course” even in the face of irrefutable evidence of past failures.

During the 1990s, Democrats staunchly defended the federal welfare system. Americans knew better. They understood that the existing system wasn’t working, and was contributing to the problem of poverty by fostering dependency. The Republican Congress doggedly passed reform bill after reform bill until President Clinton finally relented. Welfare case loads fell by nearly 60 percent in the first five years after the program’s implementation. Now the reform almost universally is acknowledged as a success.

Today, the Democrat party is again allowing ideology and special interest pressure to overwhelm common sense in its approach to K-12 education. For decades, Democrats have insisted more money will improve America’s public schools. And government has heeded this call. Since 1980, per-pupil spending on K-12 students has increased by 70 percent after adjusting for inflation. Senator Kennedy and Rep. George Miller continue to call for billions more in new funding for No Child Left Behind. Yet there has been little to show for this investment; indeed, by many measures, things have gotten worse. The recent National Assessment of Educational Progress, for example, found reading scores for 12th graders declined between 1992 and 2005.

Americans increasingly recognize that throwing money at the problem doesn’t work. Conservatives across the country have developed and pressed a new approach: injecting competition into education by giving parents power to select their children’s schools. And school choice programs have shown results. Research has consistently shown that kids who use vouchers to go to private school outperform their peers.

Instead of defending the status quo, Democrats ought to take a step back and consider they would do if designing an education from scratch. Would they really force all 50 million five through seventeen-year-olds into government-run schools assigned by zip-code? Probably not, since most would consider this unfair to low-income families that can’t afford to opt out of the public system or move to better neighborhoods. With a little perspective, it’s clear that the status quo isn’t serving our students well.

Social Security is another example of the Democrats’ stubborn determination to “stay the course” regardless of where that course leads. For years, actuaries—Social Security’s equivalent of “generals on the ground”—have warned of a coming financial crisis. People are living longer, the baby boomers are about to retire, and soon there will be too few workers to support Social Security crippling tax hikes.

Many Republicans—President Bush in particular—have attempted to talk honestly about the problems inherent in Social Security’s financing scheme, which relies on taxes collected today to immediately pay beneficiaries, while saving nothing for the future.

Again, policymakers must ask: If creating a public pension system today, would this kind of financing make sense? The answer clearly is “no.” The manager of any private pension fund run this way would quickly be thrown in jail; all honest experts agree that the key to true financial stability is pre-funding future benefits through responsible savings and investment. Yet Democrats consider it heresy to question the status quo, facts be damned.

Public frustration over Social Security’s raw deal and failing public schools may not yet equal its disillusionment with Iraq. But truth is, many Democrat-beloved big government programs aren’t working and eventually voters will see it. Party leaders would be wise to apply their rhetoric about Iraq on the home front by embracing a change of course.