Can a “Good Student” Be a Great President? 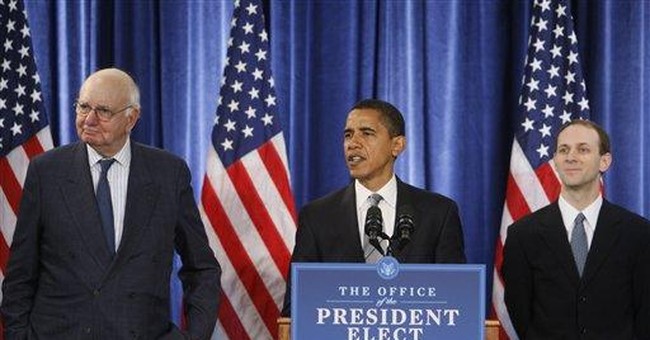 Up until now, Barack Obama has been America’s Rorschach ink-blot test: We look at him, and see the realization of our greatest hopes – or our worst fears. But as he names his Cabinet members and other top advisors, it seems increasingly possible that those who hailed his victory as the apotheosis of liberalism may have been as wrong as those who warned about the immediate institution of socialism on his watch.

Obama’s staffing choices have been at once reassuring and profoundly unsettling. For the most part, those he has placed in key positions, though liberal, are far more moderate and experienced than anyone had a right to expect, given his campaign rhetoric and his lefty voting record. That’s reassuring. But it’s unsettling to have elected a man to the highest office in the world and still be wondering: So who is this guy, really?

Such a question is almost unthinkable looking at most of the major party nominees, at least in recent years – and laughable when it comes to previous presidents. For better or worse, everyone knew exactly what we were getting with Ronald Reagan, George H.W. Bush, Bill Clinton and George W. Bush – as we would have, say, had Hillary Clinton or John McCain been planning her or his transition into the Oval Office about now.

That’s not the case with Obama, a real newcomer on the national (and even the senatorial) scene. And now, as he surrounds himself with an increasing number of centrists, it’s worth asking whether Obama himself might actually (gasp!) be aspiring to a highly successful centrist presidency. Does he see himself as another Bill Clinton – minus the sexual scandals and presented by circumstances, including the financial crisis and the war on terror – with the chance for “greatness”?

Certainly, it’s hard to look at Obama’s past – from his ACORN-embracing community organizer days to his relationships with Jeremiah Wright and Bill Ayres to his US Senate voting records – and not conclude that he’s a man of the hard left. But could it be that he’s simply a man of expedience, one willing to do what it takes to achieve his aims, whatever they are?

After all, Obama’s work for ACORN and his friendships with Wright and Ayres offered him a solid base from which to launch his political career. His state senate record, guided by political godfather Emil Jones, was littered with enough votes of “present” to indicate that self-promotion, rather than conviction, was the order of the day. And recall that he arrived in Washington after the election of 2004, as it became clear both that opposition to President Bush was steadily growing, and that most of the Democrats’ energy and passion was emanating from its leftist fringe.

In such circumstances, compiling the most liberal voting record in the US Senate made strategic sense – especially if the idea was to present a liberal alternative to Hillary Clinton, who had long telegraphed her intention to run for president as a centrist. Now, having won the greatest political prize in the world, all that remains for Obama is the verdict of history. “Success” will be defined, in large part, by the judgment of citizens of a country that remains, for the most part, center-right. And so he may conclude that a centrist approach makes sense.

Only time will tell whether an Obama presidency will defy his supporters’ best hopes and his opponents’ worst fears. Certainly, if he chooses to govern as a centrist, it will be better for the country than a dose of leftism. But it will also raise troubling questions about the core of the man America has elected – if there is one.

It’s possible, after all, that Obama’s vision and aspiration was more to win the presidency than to do anything meaningful once he got there. In a recent essay, professor and writer Joseph Epstein described the products of the Ivy League milieu from which Obama has emerged as “good students: those clever, sometimes brilliant, but rarely deep young men and women who, joining furious drive to burning if ultimately empty ambition, will do anything to get ahead.”

If Barack Obama is simply a “good student,” can he still be a great President?