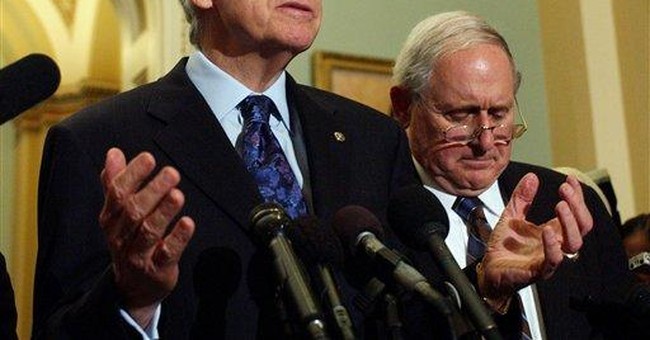 “Sagging ratings may not hurt Democrats,” the headline of a recent AP story proclaimed triumphantly. According to the political strategists cited in the piece, historically low Congressional approval ratings are attributable to “widespread anger over the war in Iraq, and lawmakers’ inability to change the war’s course.” Therefore, the experts concluded, “Republicans are still far more vulnerable than Democrats.”

Put aside the inconvenient fact that Congress’ ratings have been even lower than those of the war’s chief proponent, President George W. Bush. To the extent that Republican vulnerability on war-related issues remains, it means only one thing: They’ve failed to communicate a very simple truth – that Democratic leadership means fecklessness and defeat when it comes to the war in Iraq in particular, and the war on terror generally.

Start with the war in Iraq. After hosting the Senate’s sleepover last week designed to dramatize Democrat opposition to the war, Senator Harry Reid pulled the defense authorization bill from Senate consideration. As a result, he effectively denied a 3.5 percent pay increase to the men and women of the U.S. military, delayed the modernization of their equipment, and stymied the passage of important legislation intended to address the care of wounded soldiers. As Senator John McCain pointed out, all this occurred because the Democrats failed to circumvent the debate that will occur in September when General Petraeus reports on the results of the surge. Shouldn’t the Republicans be ensuring that voters know this is what Democrats mean when they talk about “supporting the troops”?

Later in the week, presidential candidate Barack Obama opined that preventing a potential genocide in Iraq isn’t a sufficient reason for keeping American troops there, noting that such a rationale would mean that troops should be deployed in places like the Congo and the Sudan. Republicans should be observing, loudly, that the statement is telling. Apparently, one of the Democratic presidential frontrunners sees no need to honor the moral obligation the United States has assumed in the wake of its liberation of Iraq and the accompanying exhortations to Iraqi citizens to fight back against terrorists – terrorists who, if free to do so, would begin by slaughtering those who had accepted America’s invitation to support democracy and freedom.

Likewise remarkable was the candidate’s obvious willingness to ignore the unique strategic importance of Iraq as a potential tinderbox igniting Middle East warfare in the event of a premature withdrawal, and as ground zero in the war on terror, at least according to Al Qaeda’s leadership. In fact, the recently released National Intelligence Estimate characterized Al Qaeda in Iraq as the terrorist group’s “most visible and capable affiliate and the only one known to have expressed a desire to attack the Homeland” – but again, that simply doesn't seem to matter to the Democrats.

Republicans need to emphasize that the Democrats’ lack of seriousness isn't limited to the war in Iraq; it extends to the larger war on terror, as well. That point was again driven home last week, as well, when through the manipulation of Senate rules, Democrats managed to exploit a legislative technicality to block inclusion of the “John Doe” amendment in the 9/11 security bill. The amendment, designed to protect well-meaning tipsters from being victimized by frivolous lawsuits when they report suspicious behavior that could indicate the existence of terrorist plots, was thwarted by those who apparently believe that the potential dangers of “racial profiling” exceed those of a terrorist attack. It’s indicative of where Democratic priorities lie.

As in every conflict, there have no doubt been tragic mistakes, problems and misjudgments both in Iraq and in the larger war on terror. But to the extent that American voters are left to conclude that Democratic policies are preferable to Republican in these dangerous times, Republicans have no one to blame but themselves. After all, Republicans have a compelling case to make – of Democrat power-mongering, politics-playing, and profound lack of seriousness in protecting the American people and their vital national security interests, both at home and abroad. Any party that isn't capable of explaining this straightforward narrative to the voters – well, perhaps it actually deserves to lose. Democrat equals Defeat. Republicans: Remember it, recite it, and repeat it – until voters understand how dangerous Democrat “leadership” in the war on terror really is.