Why the immigration bill failed 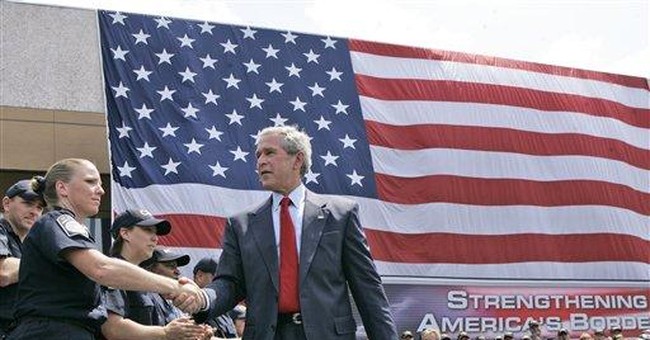 It’s still an open question whether the Senate immigration bill once hailed as a “grand bargain” returns to the Senate floor this week or fades forever from public and political consciousness. But before they try to resurrect this or any other immigration bill, President Bush and the senators who supported this failed effort would be well-advised to heed the opinion of the people who have elected them.

A New York Times/CBS poll taken May 18-23 found that 69% of Americans believe that illegal immigrants should be prosecuted and deported; 82% of those surveyed said the federal government should be working harder to “”keep illegal immigrants from crossing into this country.” And according to a Rasmussen poll, by a two-to-one margin (60% to 28%), Americans set a higher priority on gaining control of the nation’s borders than regularizing the status of illegal immigrants, while 75% opined that it’s very important for the United States to “improve border enforcement and end illegal immigration.”

At its heart, the bill was profoundly out of step with public opinion. In fact, it’s remarkable that any legislation with so many elements so at odds with prevailing opinion among Americans was ever given much of a chance at passing. Perhaps that’s why the bill’s proponents, who long believed that they had a winner on their hands, came in for a rude awakening by week’s end. But there were also plenty of other reasons for the legislation’s collapse.

The bill was flawed on its merits. For much of the past three weeks, Americans have had a tutorial on the substance of the immigration bill, and many came to dislike what they saw. From providing permanent temporary visas within the space of a business day to all comers before January 1 – including those from “countries of interest” well-known for their terrorist ties – to the “triggers” that could be largely certified without any meaningful improvement in border security, the bill’s opponents identified the significant dangers and disadvantages hidden in the bill.

Other controversial provisions included the elimination of the EB-1 visa, designed to facilitate the entry to the U.S. of those with exceptional gifts, skills or talents, and (especially for those on the left) the creation of a guest worker program unacceptable to labor unions. In fact, the more its provisions came to light, the more that even long-time self-described “liberals” on immigration like Bill Kristol came to oppose the legislation.

The rollout of the bill was misguided. Like Athena springing full-grown from the head of Zeus, the immigration bill arrived directly on the Senate floor as the product of negotiations between a select group of senators. It bypassed the normal Senate committee system, which allows for both a deliberative and orderly process for the consideration of legislation, and the full airing of amendments. What’s more, it’s been reported that Senator Ted Kennedy admitted that special interest group La Raza was offered a veto over the bill’s provisions – before many other senators even had seen them. The closed-door drafting and special interest input only raised suspicions that the bill was being shoved down America’s throat – concerns that were heightened when the bill’s supporters presented the legislation insisting that it be “debated,” voted upon and passed within the space of a week.

The attitude of the bill’s proponents was counterproductive. It’s quite possible that the immigration bill would still be alive and kicking had its supporters treated opponents more respectfully. Republicans are used to being accused of all kinds of bigotry by their Democratic counterparts, but it was insulting (and infuriating) for Republicans who raised concerns about the bill in good conscience to be characterized by a President of their own party as lacking the will to “do what’s right for America.” Others, such as Republican presidential hopeful John McCain and Democratic Senator Dianne Feinstein, repeatedly insinuated that those who opposed the bill did so from unworthy and bigoted motives. Worst of all, none of the bill’s supporters paid its opponents the courtesy of addressing their concerns substantively and respectfully. Instead, they took the low road and in doing so, only hardened the will of their opposition.

Key amendments were voted down. Those who objected to the legislation did so in large part because they suspected that the bill’s supporters were not serious about securing the border and enforcing the immigration laws already on the books. Their reservations were justified when a majority of the Senate defeated common sense amendments.

For example, Minnesota Senator Norm Coleman presented a measure that would have prohibited “sanctuary cities” and states from passing laws preventing law enforcement from sharing information about illegal aliens with the federal government. An amendment offered by Senator John Cornyn of Texas would have ensured that members of terrorist-related organizations, known gang members, sex offenders, alien smugglers who use firearms and felony drunk drivers were either barred from the U.S. or prohibited from obtaining any immigration benefit. When these measures and others like them were voted down, it only reinforced the sense that the bill’s proponents were more interested in legalizing immigrants than in enforcing the law or protecting the American people.

Process was elevated over substance. Ironically, some senators who might otherwise have supported sensible, bill-saving amendments refused to do so because they believed it would undermine the spirit of their “Grand Bargain.” From the time when the legislation was first presented to the American people, the public was treated to elevated disquisitions from some of its negotiators, who praised themselves lavishly and let it be known that they had basked in the perfumed and rarified air of bipartisanship.

Amid their self-congratulation, they missed an important fact. Although Americans may applaud the concept of bipartisanship, the truth is that they didn’t send representatives to Washington to engage in a “bipartisan process.” Rather, they elected them to pursue certain policies. The “grand bargainers” – especially on the Republican side – became so enamored of the process of bipartisan negotiation that they lost sight of the reality that “progress” doesn’t so much consist of following certain procedures as it does of achieving certain policy objectives.

Given the number and the magnitude of the mistakes made by the immigration bill’s supporters, the bill’s resilience could actually be understood as a testament to the power of elite Beltway thinking. And contrary to many of the assertions of the failed immigration bill’s proponents, real immigration reform can be achieved – but it will have to reflect the wishes and convictions of the American people, rather than focusing on the priorities, prerogatives and preoccupations of a small circle of the Beltway elite.