Mike Wallace - You've got some nerve 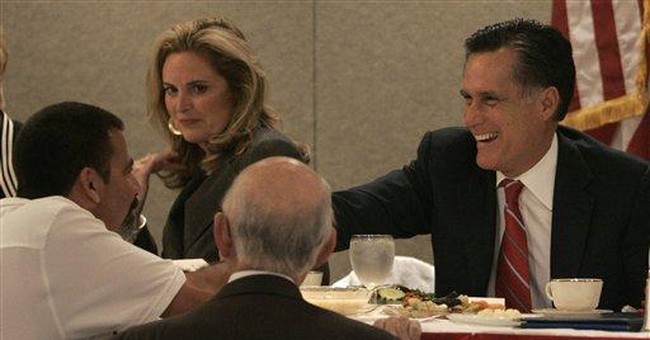 Must everything be about sex – or at least have a sexual component – these days? Remarkably, in the course of an interview for “60 Minutes,” Mike Wallace actually had the nerve to ask presidential candidate and former Massachusetts governor Mitt Romney whether he and his wife had engaged in premarital sex.

What with the Iraq war and Islamofascist terrorism, the twin threats of North Korean and Iranian nukes, health care, federal spending, and a host of other issues, one might think that Wallace would have other preoccupations than finding out what Mitt and Ann Romney did – or, more accurately, didn’t do – before they were married. In any case, the inappropriateness of the question boggles the mind.

Underlying the nature of the entire inquiry seems to be a “gotcha” game of the worst sort.

On the one hand, if it had turned out that the Romneys had, indeed, engaged in premarital sex, the Governor would be revealed as someone who is less-than-faithful to the tenets of his own religion – a hypocrite, in the eyes of some. And in a country where liberal groups like the Guttmacher Institute release studies assuring Americans that 95% of their countrymen engaged in premarital sex, sadly, a candidate who has chosen to follow a different course risks being perceived as slightly weird, perhaps even in thrall to some sort of alien doctrine.

It’s ludicrous to assert that Mormonism’s strict prohibition on premarital sex brought the question “in bounds,” given that Romney is the first Mormon to run for President. The Catholic Church likewise frowns on premarital sex. Is anyone planning to ask the Giulianis the same question? Of course not. And the United Methodist Church decrees that “sexual relations are only clearly affirmed in the marriage bond” – but would anyone quiz Methodist Hillary Rodham Clinton about her pre-wedding sexual escapades with (or without) Bill? Not a chance. And that’s in part because it’s understood (for better or worse) that many Catholics or Methodists will fall short of their churches’ teachings in certain areas. Why would, or should, a different standard obtain for Mormons, simply because Mike Wallace may not be as familiar with them and their beliefs?

Certainly, in some circumstances, questions about a candidate’s sex life can be valid, if unsavory. As Bill Clinton’s Oval Office tenure proved, terrorist plots can hatch while a President is spending time engaged in illict activities with a curvy intern. And if a candidate’s sexual behavior could become relevant to the way he would fulfill his responsibilities as the nation’s chief law enforcement officer and commander-in-chief, there may well be justification for the salacious questions that often tend to drive television ratings.

Yet never has a whiff of sexual scandal surrounded Mitt Romney. That being the case, simple decorum would seem to demand that certain topics be left decently unmentioned. When and where a married candidate – who has remained faithful, by all accounts – first had sex with his wife is one of those topics. Indeed, the marriage bond does, or should be deemed to, confer a certain element of dignity on the act of sex, which should shield a married couple’s private sexual history from leering inquiries of the public in general and reporters in particular.

Nowadays, of course, the distinction between marital and non-marital sex is under attack as never before, with moral equivalence the order of the day. For that reason, perhaps it’s not surprising that Mike Wallace and his producers would assume that it’s no more inappropriate to pry into the private sex life of a married couple than it is to ask a single or philandering candidate when he first consummated a non- (or extra-) marital affair.

But whether they acknowledge it or not, most Americans understand that when it comes to posing such personal and intrusive questions, context is everything. When there’s justification for public curiosity about a candidate’s sexual life and history, more leeway is permitted. But when inquiries about a discreetly-conducted private marital sex life constitute either a clumsy effort to sort out a candidate’s religious beliefs or an exercise in prurient inquisitiveness, disdain for the question – and disapproval of the questioner – is the only appropriate response.