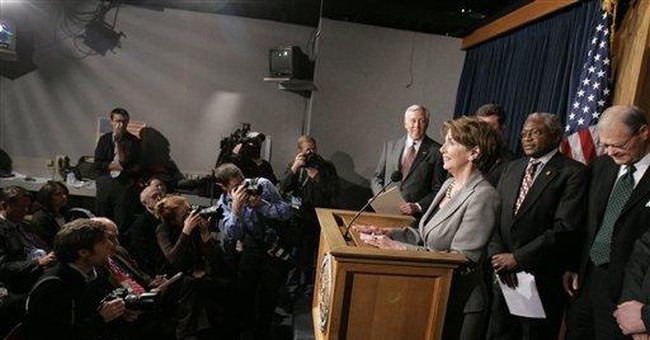 With their vote on Friday for a non-binding resolution condemning the President’s troop surge, the Democrats have finally formalized their position: They have thrown their political fortunes squarely behind an American defeat in Iraq. Of course, the vote was shameful, given General Petraeus’ admonition that such a resolution would do nothing but dispirit our soldiers and embolden our enemies. But it was also dangerous – because it means that, in order to realize their primary goal of maintaining and expanding their political power, Democrats now have a real and concrete stake in ensuring that America fails in Iraq.

The Democratic Party has been on the wrong side of every war from Vietnam forward. Democrats forced American defeat in Vietnam, with behavior so feckless that – although they prevailed at the time – they gained a reputation for weakness on national security that lingers to this day. They are the ones who were convinced that a nuclear freeze was the only path to peaceful coexistence with the Soviet Union – and opposed President Reagan’s “peace through strength” approach every step of the way. The only prominent opponents of the 1991 Gulf War were Democrats – had their views prevailed, Saddam Hussein would have occupied Kuwait indefinitely. And of course, Bill Clinton’s manifold foreign policy failures – from ignoring terrorist attacks to declining custody of Osama bin Laden – have been well-documented.

Given this sorry record, perhaps it’s no wonder that Democrats are eager both to claim foresight on a foreign affairs matter and to see their longstanding pessimism about American military might supposedly vindicated. The only problem is that their political interests now conflict with the national interest: An American defeat is necessary for them to realize these objectives.

Accordingly, Democrats’ behavior has far surpassed cherishing a furtive, unspoken interest in America encountering obstacles in Iraq. They now seem intent on creating them. They have done more than support (in the House) and promote (in the Senate) measures that signal irresolution, weakness and division to America’s enemies. In the national security equivalent of “talking down” the economy, prominent Democrats – most recently Senator Charles Schumer – have openly declared the war in Iraq to be “unwinnable,” even as terror operations in Baghdad have fallen by 80% since Iraqi and U.S. forces began implementing the new security plan, according to the Iraqi army's spokesman.

What’s more, John Murtha and other Democrats are proposing a “slow bleed” strategy for forcing American defeat, by seeking to impose funding restrictions on the war and making it difficult for the Administration to man the troop surge. It’s a dishonorable and sneaky way render US success in Iraq impossible while sparing the Democrats the unpopularity that would result from their pursuing the same end more transparently (by, for example, withholding funding).

Of course, no one knows if the “surge” – or America’s involvement in Iraq – will ultimately succeed. But one thing is certain: If the Democrats have their way, the mission will inevitably end in failure for the United States, and justification (as well as encouragement) for the Islamofascist terrorists’ animating belief that the United States is too weak and decadent to defeat them.

Even as it becomes ever clearer that their political interests are inescapably aligned with those of America’s enemies in Iraq and elsewhere, the Democrats are convinced that they occupy the political cat-bird seat. But whatever their own doubts about the prosecution or ultimate outcome of the war, the American people are right to be wary of a party that – for its own political benefit – must hope for and embrace an unnecessary U.S. military defeat simply to consolidate and enhance its own power.