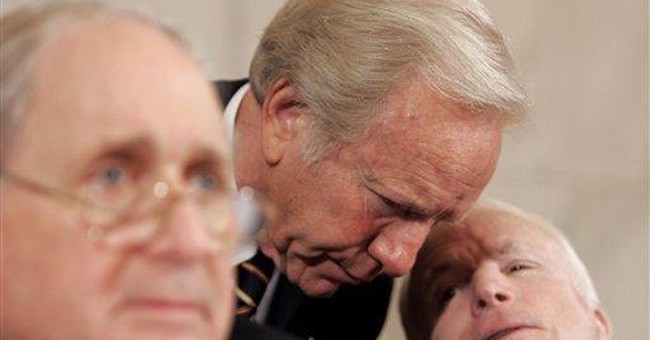 In recent days, it’s become clear that Democrats in the U.S. Senate are determined to pass some version of a non-binding resolution that will – as General David Petraeus explained in congressional testimony – have the effect of emboldening America’s enemies. The reasons for supporting such a destructive course are varied. Some senators, like Russ Feingold, truly believe the war isn’t worth winning or can’t be won; others, like the party’s declared presidential candidates, are simply trying to score political points. Sadly, even some weak-kneed Republicans seem to be poised to join the Democratic effort to undermine the war effort and American soldiers by supporting a resolution opposing the President’s plan for sending more troops to Iraq.

The Republicans who are contemplating signing on to the Levin-Warner resolution could learn something from the Democrats’ tenacity in the decades-long “war on poverty.” For more than 30 years, despite countless mistakes and unforeseen negative consequences, Democrats have resisted the notion of surrender (and even, less commendably, even modest reforms). They have met innumerable setbacks not with retreat but with resolution, new strategies, and continued efforts to advocate the rightness of their cause (sometimes, regrettably, resorting to hysterical exaggerations and falsehoods). When it comes to the war on Iraq, wavering Republicans should model the nobler aspects of this example of Democratic resolve.

Certainly, in the “war” they’ve cared about, the Democrats have persisted despite failures that make many of those in Iraq seem minimal. After all, between President Johnson’s declaration of a “war on poverty” and the 1990’s, approximately $5.4 trillion dollars were directed to anti-poverty programs – though poverty rates in 1990 were nearly the same as those in 1960. By 2001, despite modest gains for children and the elderly, poverty rates for those 18-64 totaled 10.1%, compared to 10.5% in 1966 (data for 1964 weren’t available). Even so, Democrats have vocally, even hysterically, resisted virtually every effort to reform programs designated as part of the war on poverty, despite what might be charitably characterized as a decades-long stalemate.

Just in recent years, researchers have pointed out egregious examples of government inefficiency, waste and fraud. According to the Heritage Foundation’s Brian Riedl, for example, Medicare boasts about $12 billion in annual payment errors. In 2001, HUD’s $3.3 billion in overpayments accounted for more than 10% of the department’s budget. Overpayments from the Earned Income Tax Credit cost $9 billion per year. According to a Department of Agriculture study, 18% of participants in school lunch programs don’t qualify because of their high family incomes. And those are just a few examples.

In other instances of egregious waste and duplication, there are fully 72 federal programs devoted to assuring clean water; 130 programs to help the disabled; and 90 early childhood development programs. Contemplating the total scope of all the waste, fraud and abuse since the inception of the “war on poverty” boggles the mind. As most Republicans would acknowledge (and many Democrats deny), fraud, waste and abuse are inevitable when government grows too large and tries to do too much.

In recent days, distressing news has surfaced of the apparent waste and mismanagement of some portion of the $38.2 billion allocated to rebuilding in Iraq. Certainly any waste, fraud and abuse of the money that was supposed to be devoted to worthy projects is a travesty, and a crime deserving of the harshest penalties. But however outrageous and criminal the mismanagement and thievery in Iraq, there’s no doubt that it pales beside the abuse of taxpayer money that has long occurred here in the United States. Even so, the Democrats have continued to insist that a “war on poverty” is nonetheless worth fighting.

Perhaps the cynical would suggest that Democratic support for the war and reconstruction in Iraq would be more enthusiastic if there were votes to be harvested in the streets of Baghdad. But if it’s right to stand fast to assure a minimum standard of living for the most destitute and underprivileged in America, isn’t it just as important to remain steadfast in defending the security, and even the survival, of America itself through the defeat of our enemies in Iraq?