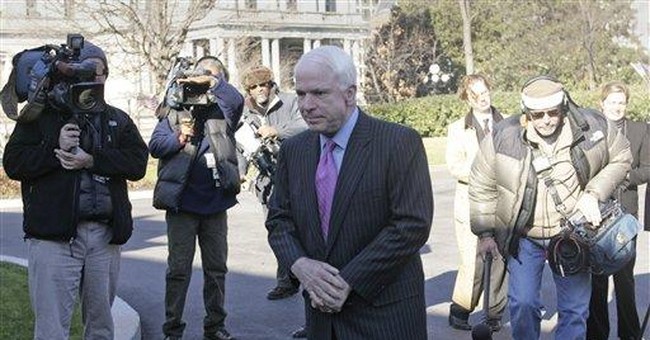 John McCain has long enjoyed an aura of inevitability among Beltway elites as he pursues the 2008 Republican presidential nomination. And for some time, buoyed by friendly press stories, it seemed that he might, indeed, succeed in persuading Republicans nationwide that he was the only candidate who could stand between them and electoral disaster. Certainly, many conservatives, especially those in Washington, D.C., were convinced that McCain offered the greatest hope of defeating a formidable Hillary Clinton, and grudgingly put aside their reservations about him for that reason.

A major part of McCain’s appeal to the Beltway conservatives who otherwise disliked him was, of course, his much-canvassed “independent” streak. His appeal to independent voters, Republicans were repeatedly reminded, could prove an asset so valuable that it was worth overlooking all the reasons for conservatives (and his D.C. colleagues) to oppose him: His leadership of the Gang of 14, his stance on immigration, his promotion of campaign finance “reform,” his opposition to some of President Bush’s tax cuts and his outspoken denunciation of alleged “torture” of terrorist detainees – coupled with a knack for showboating and a hunger for media attention that’s voracious even by Beltway standards.

But the well-rehearsed rationales for the rank-and-file to line up behind McCain – focusing on his appeal to independents – may be coming apart at the seams. According to a new American Research Group poll, John McCain’s poll numbers have fallen precipitously in independent-minded New Hampshire; he pulled 49% of the independent vote there in 2000, but is at 29% among independents now. The president of the American Research Group has reported that the same trend is holding in other states, including early primary battlegrounds like Iowa and Nevada.

The reason for the downward spiral is clear: McCain’s support both for the war in Iraq generally and the President’s plan for a troop “surge” in particular is massively unpopular among independents. It is, perhaps, a warning for Republicans that the one issue upon which he has exceeded GOP expectations is representing such a colossal political stumbling block.

But it’s also a reminder that those who position themselves as “mavericks” can, ultimately, end up as the leaders of a party of one. McCain is caught in a big squeeze. On the right, he’s confronted with hostile conservatives who are mindful of numerous issues where the senator has not only opposed them, but hinted to a receptive press that their positions were ever-so-slightly immoral. On the left, he’s now recalling the cruel lesson that independent support can be unreliable – given that independents’ political sympathies are fluid by nature.

In risking some overtures to the center, Hillary Clinton runs the risk of encountering similar problems. Even so, they’re much less likely to be fatal to her chances, given that she’s shown a less-than-principled “flexibility” when it comes to her stance on Iraq, the reservoir of good will she’s amassed through years of alignment with the left, and the unique benefits that accompany her status as a former First Lady. McCain possesses no comparable advantages.

There is, of course, still time for McCain’s fortunes with independents to change dramatically for the better – if, that is, the troop surge in Iraq shows some signs of progress. He might, likewise, be able to shore up some support on the right if he can successfully lead an effort to stymie burgeoning Republican support for the non-binding resolution opposing the troop surge.

For now, however, McCain’s dreams of wooing reluctant fellow Republicans through the promise of victory are dangerously close to being broken on the rocky shoals of independent opinion in the Granite State and elsewhere.