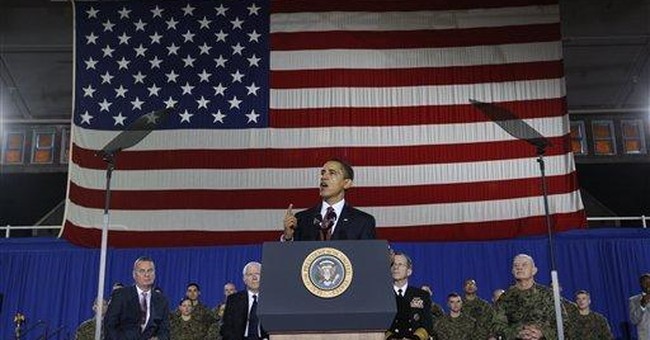 Since the Democratic Party's presidential primaries a year ago, there has been an ongoing debate about how Barack Obama perceives the U.S. alliance with Israel. After he entered office last month, the need to understand what President Obama thinks about Israel has become acute as we attempt to make sense of his emerging strategy of appeasement for dealing with Islamic terror groups, Pakistan, Iran, and the Arab world.

Starting with his first day in office, Obama has made clear he intends to end the U.S. war against Islamic terror. In his first week in office, he announced he will make good on his campaign pledges to withdraw U.S. forces from Iraq, outlaw most of Washington's means of dealing with captured terrorists, slash the defense budget, and diplomatically engage rather than militarily confront state sponsors of terror and weapons of mass destruction proliferators Iran and Syria. And ever since, he has been actively implementing policies aimed at achieving these goals.

In Pakistan for instance, rather than encourage the Zardari government to fight the burgeoning Taliban forces throughout the country, the Obama administration reportedly supports Pakistan's decision to surrender much of the country to Taliban rule. So it is that the Pakistani government's decision to surrender the Swat Valley -- located just a hundred miles from Pakistan's nuclear arsenal in Islamabad -- to the Taliban reportedly enjoyed the quiet backing of the White House.

Then of course there is Iran. Even as the UN acknowledges that by illegally enriching uranium Iran now stands at the cusp of a nuclear bomb, and despite the fact that Iran's satellite test earlier this month shows that Iran has the capacity to attack Europe and is close to achieving the capacity to attack the U.S., the Obama administration insists it wants to talk to the mullahs. And while it is figuring out how to do that, it has opposed placing any new sanctions on Iran.

After Iran comes Syria. Over the past few weeks, the administration suspended the enforcement of U.S. sanctions against Syria. It has also expressed its interest in returning the U.S. ambassador to Damascus. The Bush administration withdrew the U.S. ambassador after Syria ordered the February 2005 assassination of former Lebanese prime minister Rafik Hariri. Obama has reportedly selected Frederic Hof, known for his hostility to Israel, as his designated envoy.

The Obama administration's eagerness to renew ties with Damascus was made explicit with Senator John Kerry's visit with Syrian President Bashar Assad last week. Kerry didn't seem to mind that while he was talking to Assad, Syrian-sponsored and Hizbullah-controlled terrorists lobbed Katyusha rockets at Israel. Instead of decrying Syria for its co-sponsorship with Iran of Hizbullah and Hamas, Kerry applauded Syria for its willingness to support the reestablishment of a Hamas-Fatah government and asked Assad to help stabilize the situation in Hizbullah-controlled Lebanon.

As to Hamas, before traveling to Damascus, Kerry became the first U.S. official to visit Gaza since Hamas seized control of the area in June 2007. While there, he accepted a letter from Hamas to Obama. Kerry is not alone in his willingness to accept Hamas's control of Gaza and its legitimacy as a political force. To the contrary, he was following the administration's lead.

Last week the administration gave three signs that it is preparing the ground for future U.S. recognition of Hamas. First, the administration announced its support for the reconciliation of Hamas with Fatah. Next, Secretary of State Hillary Clinton announced that in her first official visit to the Middle East next month, she will participate in an international conference in Cairo whose goal is to raise money to finance the rebuilding of Hamas-controlled Gaza in the wake of its missile war against Israel.

Obama's supporters claim these moves stem from the president's basic belief that it is better to talk with U.S. opponents than to boycott them. While the net effect of all of them is to weaken Israel, none of them, it is argued, is directed against Israel, which Obama of course supports.

It is comforting to believe Obama is motivated not by hostility toward Israel, but by naiveté. After all, if true, it means that as his attempts to appease the Arabs, Iran, and the Taliban are rebuffed, he will change course.

Unfortunately, two recent developments lend credence to the view that in courting the likes of Mullah Omar, Mahmoud Ahmadinejad, Assad and Khaled Mashal, Obama is not motivated by naiveté but by a conviction that the U.S. should abandon Israel. The first was the administration's Valentine's Day announcement that it was sending a delegation to Geneva to participate in the planning sessions preceding the UN's Durban review conference set to be convened in Geneva on Yom Hashoah in late April.

In contrast, by sending a delegation to participate in the planning session last week, the Obama administration signaled its willingness to participate in this war against Israel. During the planning session, American delegates in Geneva chose not to object to a Palestinian draft declaration that defined Israel as a racist state with no right to defend itself and that called for international protection for the Palestinians. U.S. silence enabled the draft to be adopted by unanimous consent.

Freeman is an outspoken opponent of Israel. He has stated repeatedly that the source of Islamic and Arab hostility toward the U.S. and violence against Americans -- including the September 11 attacks -- is the American alliance with Israel. Were the U.S. to abandon Israel - which he believes is solely to blame for the Arab world's rejection of its right to exist and for Iran's stated intention to destroy it -- then the U.S. would have no further difficulties with the Arabs or Iran.

Obama's support for Freeman, like his support for Samantha Power and Susan Rice, who largely share Freeman's view, make clear that contrary to what Obama's supporters believe, hostility toward the American alliance with Israel has played and will continue to pay a central role in determining Obama's strategies vis-à-vis the Arab and Islamic worlds. If, as Freeman has argued, the only reason the Arabs and Muslims hate the U.S. is its support for Israel, then the U.S. should be able to end the war simply by abandoning Israel and reaching out to the Arabs. Taken collectively and individually, all of Obama's policies toward the Arab and Islamic world and toward Israel comport with this basic notion.

This, of course, is distressing. But to forge a strategy to contend with the Obama administration, it is important to first understand what motivates the White House. Only by recognizing the ideological origins of Obama's policies can Israel and its allies in the U.S. have any hope of contending with them successfully.