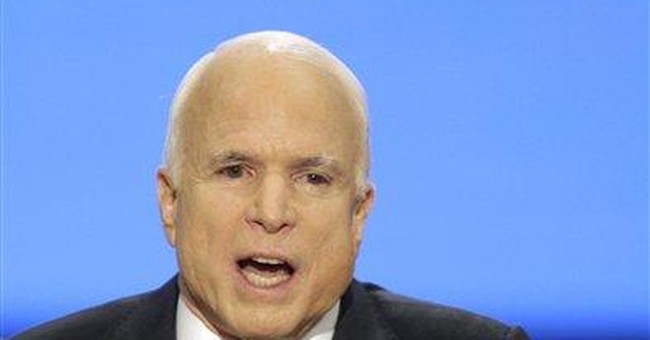 The rarity of this sort of strategic wisdom in the public sphere was brought to the fore this week in the political uproar generated by US Republican presidential nominee Senator John McCain's selection of Alaska Governor Sarah Palin as his running mate. McCain's selection of Palin was remarkable because in choosing her from the list of possible candidates, he made a decision that embraced rather than ignored this most basic challenge of leadership.

Given that the universality of the logic that informed McCain's selection of Palin is followed more in the breach than in practice, it is worth analyzing his choice, both for what it tells us about his leadership skills, and about the nature of his domestic opposition. But it is also useful to reflect on his choice of Palin to draw lessons that can be applied more widely by non-leftist political strategists and military strategists throughout the free world.

In the months preceding McCain's announcement of Palin as his running mate, his central challenges as the Republican presidential nominee came into focus. In Senator Barack Obama, McCain faces a young, vigorous and charismatic opponent who has successfully energized his supporters and the powerful US liberal media establishment. Owing to that excitement, Obama has raised unprecedented amounts of campaign contributions. He has also rallied tens of thousands of loyal foot soldiers who have volunteered to serve his campaign. Both the donors and the volunteers are essential for winning voters and bringing them to the ballot boxes on November 4.

But all of these formidable strengths are matched by countervailing vulnerabilities. While Obama's supporters are energized, the drawn-out primary election battle with Sen. Hillary Clinton splintered the Democratic Party base. Whereas most of Clinton's voters will no doubt vote for Obama in the general election, their support is more tenuous in swing states where Obama's cultural cache is less appealing.

And while Obama is a stunning speaker, his record of actual accomplishments is all but nonexistent. The combination of his extraordinary speeches and his ordinary empty resumé engenders a sense that Obama suffers from extreme arrogance.

Then, too, while the media has done its best to project a positive and credible image of Obama, his past political associations with radicals such as Rev. Jeremiah Wright and William Ayres and corrupt influence peddler Tony Rezko call both his patriotism and his honesty into question.

McCain's balance of assets and deficits is almost the polar opposite of Obama's. He has a wealth of leadership experience and demonstrable political accomplishments. His patriotism is massively recognized and respected.

On the other hand, McCain has been unable to generate excitement in his party. His reputation as a maverick has often been earned at the expense of his political base, which is overwhelmingly socially conservative and suspects him of being a closet liberal. This has made fund-raising a challenge, and raised concerns that many conservatives will simply not vote on Election Day.

Moreover, McCain has never distinguished himself as a great communicator. His war wounds, which prevent him from raising his arms above his shoulders, make him appear even older than his 72 years. When compared to the vigorous, handsome 46-year-old Obama, McCain tends to look and sound like an old man.

In light of these realities, McCain's strategic challenge has been on the one hand, to transform Obama's strengths into weaknesses while bringing Obama's actual weaknesses to the public's attention in a persuasive way. On the other hand, McCain needs to unify his own party around his candidacy without alienating independents and Democrats whose votes can be won.

In recent weeks, largely through the well-conceived, satirical use of television ads, McCain sought to meet these basic challenges. By comparing Obama's speech in Berlin to Moses's parting of the Red Sea, he playfully yet effectively drew attention to Obama's arrogance and called the credibility of his rhetorical skill into question. Other ads effectively brought Obama's slim record of actual achievements into view. Still other ads sought to attract disaffected Clinton voters by using her own primary campaign denunciations of Obama's record and radical associations.

Most importantly, in the lead-up to Palin's selection as his running mate, McCain has successfully provoked a public debate about the fairness of the media's support of Obama.

McCain's selection of Palin as his running mate, then, came after he had set the conditions for a strategic assault on Obama by successfully weakening him and discrediting his support base. The surprise entry of a young, accomplished woman with a compelling personal story who was all but unknown to the national audience, placed the Obama campaign and particularly his media supporters in a state of shock. And in their shocked reaction to her selection, the liberal media destroyed their own credibility - not to mention likability - among the general public.

The media claimed that McCain's choice of Palin was ill-conceived for three reasons. First, they argued that the popular Alaska governor has no experience in foreign policy and with only two years in state-wide office, little demonstrable experience in governing. Yet their assertions merely highlighted Obama's own inexperience while amplifying McCain's wealth of experience.

Second, the media insinuated that Palin is unfit for office because she has an infant child with Down's Syndrome. Either she will be a bad mother, or she will be a bad vice president, they claimed. Yet in so arguing, the liberal media merely demonstrated their own hypocrisy. While claiming the mantle of feminism, the media commentators belittled Palin's right to choose - together with her macho, blue collar husband - to serve her country as a mother of a child with special needs. Their harping on her personal family choices angered the vital demographic of middle class working mothers who felt personally insulted by their attacks on Palin.

Finally, of course, there was the media circus generated by Palin's belated announcement that her teenage daughter Bristol is pregnant and engaged to marry her teenage boyfriend. The news of her daughter's pregnancy evoked the ugliest media assault on a teenager in recent memory. Here, too, the media's pillorying of Palin as a lousy mother and her daughter as morally challenged discredited the media while increasing Palin's sympathy with voters shocked by this scurrilous assault on her daughter and her family values.

At the same time as McCain's selection of Palin as his running mate pushed the media over the edge, it profoundly rallied his own Republican base to his side. Palin's opposition to abortion, her membership in the National Rifle Association, her remoteness from Washington, her Pentecostal faith, together with the media attacks on her family gave social conservatives reason to be enthusiastic about the prospect of a McCain presidency.

It bears noting that that the sight of Palin's pregnant daughter appearing happily with her clean-cut fiancé at the Republican Convention on Wednesday served to reinforce the fact that women who are "pro-choice" actually have the choice not to abort unplanned pregnancies. Their presence in the hall demonstrated that embracing the responsibility of parenthood even at an early age can be a source of happiness and personal fulfillment for both fathers and mothers. That image alone no doubt ensured that on Election Day, tens of thousands of volunteers will work to bring voters to the polls for McCain.

In the midst of the maelstrom swirling around her in the days that preceded her address to the Republican Convention, it was noted repeatedly that Palin's performance Wednesday evening would make or break McCain's candidacy. If she failed to present herself in a compelling fashion, she would destroy McCain's chances of election because her failure would serve as an indictment of his judgment. But if she succeeded, she would advance significantly the Republican ticket's chances of winning on November 4.

Many argued that McCain took an unnecessary gamble by placing such an enormous burden on her shoulders. Yet the fact is that McCain no doubt knew precisely what her capabilities are as a speaker. Unlike the media, he claims that he has been watching her political rise for years. He knew that she was capable of rising to the challenge. Far from a gamble, his move was a stroke of brilliance that showed an acute understanding of who Palin is, how he himself is perceived, and what motivates both the media and his own party base.

McCain's undoing of the elite, leftist media provides a universal lesson for contending with the Left. At base, the Left's ideology, whether relating to women's rights, human rights, academic inquiry or war and peace is not universal but tribal. Moreover, when the Left is challenged on any one of its signature issues, because it cannot actually make a case for the universal applicability or even logic of its views, it tends instead to embrace the politics of personal destruction while ignoring the obvious contradictions between its stated beliefs and actual behavior.

Although a necessary component of political warfare against the Left is the ability to expose its hypocrisy, exposing its hypocrisy alone will not bring victory. Leaders and policies capable of supplanting the Leftist elite and their failed ideas are also required. In the case at hand, had Palin been perceived as under-qualified to serve as vice president on Wednesday night, McCain's chances of winning the presidency would have been vastly diminished despite his successful unmasking of the Left's hypocrisy.

McCain's strategic grasp of the requirements for a successful presidential race provide an important lesson for policy-makers and political leaders. To win in politics and war you must be willing to acknowledge both your strengths and your weaknesses, and those of your opponent. It is never easy to look reality in the face. But unless leaders are willing to do so, they will never win. What's more, they will lose.