Column One: Where America and Iraq converge 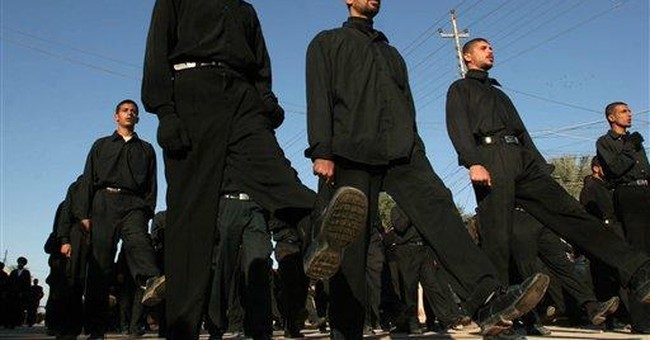 General David Petreaus and US Ambassador to Iraq Ryan Crocker's long-anticipated Congressional testimonies this week were edifying on two levels.

First, they told us a lot about the complex and challenging nature of the war in Iraq today. In their presentations, the two men did not simply inform the Congress of the estimable, indeed amazing progress that coalition and Iraqi forces have made over the past several months since the new counterinsurgency surge strategy was adopted. They also highlighted the enormity of the challenges facing the US and their coalition and Iraqi allies as they look to the future of the country.

The two men did not deliver their remarks in isolation. Their appearances on Capitol Hill came against the backdrop of shrill denunciations of Petreaus specifically and the war in Iraq in general. Those denunciations were orchestrated by deep-pocketed left-wing anti-war activists, and by Democratic politicians who apparently march to the beat of the activists' drummers (and bankrollers).

The Left's preemptive condemnations of Petreaus, and the Democratic politicians' continuation of the Left's attacks inside the committee chambers exposed the troubling direction that American politics have taken in the six years that have passed since legislators from both parties stood shoulder to should outside the Capitol building on September 11, 2001, and sang "God Bless America." And as Petreaus and Crocker's reports on the situation in Iraq today and the prospects for Iraq in the future make clear, the Democratic Party's embrace of radicalism has strategic repercussions for the prospects of the war in Iraq and for the future of global security as a whole.

As Ambassador Crocker explained, after 40 years of Ba'athist tyranny, Iraq emerged in 2003 as a traumatized and fractured society that today is still grappling with basic questions regarding its identity and its aspirations. Its ability to come up with reasonable answers to these existential questions is limited by the war now besetting it. The enemy forces battling in Iraq of course seek through force to provide answers to those basic questions - and their answers obviously will not be good ones for Iraq, for the Middle East or for the world.

Petreaus and Crocker explained that in general, the US and its allies face two distinct enemy forces in Iraq today - al-Qaida in Iraq and Iranian-backed Shi'ite forces. As the stunning reversal of the security situation in the al-Qaida infested Anbar province over the past several months shows, US forces have made great progress against the first enemy.

The US wisely capitalized on tribal leaders' disaffection with al-Qaida barbarism and worked with them to launch an offensive against al-Qaida forces and to bring the Sunni tribes into the political processes in Iraq. As a result of this cooperation, terror and insurgent attacks in Anbar, which as recently as last December was considered "lost," have gone down some 80 percent. Tribal warriors have joined the Iraqi security forces by the thousands. And for its part, the Shi'ite-dominated central government in Iraq has embraced the Sunni reversal and is providing monetary and other assistance to the Sunni leaders in Anbar province.

On the other hand, there has been no decrease, indeed according to Crocker and Petreaus there has been an increase in Iranian-directed attacks in recent months. Characterizing Iran's role Petreaus said, "It is increasingly apparent to both Coalition and Iraqi leaders that Iran, through the use of the Quds Force, seeks to turn the Iraqi Special Groups [Shi'ite militias] into a Hizbullah-like force to serve its interests and fight a proxy war against the Iraqi state and coalitions forces in Iraq."

The disparity between al-Qaida's defeats and Iran's Shi'ite countersurge tells us something important about the difference between state-controlled operations and operations by nonstate belligerents. It is true that al-Qaida in Iraq has direct ties to Syria and Iran. Its leaders have ties to Syrian intelligence; its commanders in Iraq are largely directed by al-Qaida's Shura Council in Iran; and it receives arms and funding from Teheran and Damascus.

But still there is a major difference between Iranian and Syrian sponsorship of al-Qaida in Iraq and Iranian support for the Shi'ite militias there. Iran and Syria view al-Qaida as a proxy of convenience. Although its war in Iraq serves their goal of preventing a post-Saddam Iraq from developing into a coherent, multi-ethnic, stable state governed by the rule of law, al-Qaida is not an Iranian (or Syrian) organization. From their perspective, its contribution to the war effort against the US and its Iraqi allies is good for as long as it lasts.

In contrast, Muqtada al-Sadr's Mahdi Army, the Dawa Party and the Badr Brigades are agents of the Iranian regime, as are Hizbullah and the Iraqi Special Groups.

Petreaus noted that both the US and the Iraqis were surprised by the depth of Iran's involvement in the war. But they needn't have been. Iraq and Iran, with their historic competition for primacy in the Persian Gulf and within Shi'ite Islam, have always been integrally and competitively linked. In the 1980s, recognizing the hostility of both countries to US national security interests, the Reagan administration wisely adopted a policy of dual containment toward them.

Unfortunately, in 2003, the US ignored the interconnectedness of the two countries' fates, and so it adopted divergent policies toward them. While Iraq was confronted, Iran was ignored. Over time, the US policy of neglecting Iran was eventually replaced by a policy of appeasement. This divergence in US policy toward the two countries enabled Iran to renew its traditional bid for control over Iraq just as it was making moves toward regional domination through its nuclear weapons program, its cooptation of the Syrian regime, the expansion of its military and political influence over Lebanon through Hizbullah, and its sponsorship of the Palestinian war against Israel.

Iran's offensive moves in Iraq point to one of the most basic strategic complexities of the entire battle in Iraq. Iraq does not exist in isolation. It is part of the Arab and Islamic worlds. The pathologies plaguing post-Saddam Iraq are not merely the consequence of his brutal totalitarianism. There are also consequences of the pathologies that have taken hold of the Arab and Muslim world since the collapse of the Ottoman Empire 90 years ago. As a result, the American goal of shepherding the development of a democratic, stable post-Saddam Iraq governed by the rule of law, while the rule of the jackboot, the mullah and the imam remain the order of the day in neighboring countries, has always been problematic.

With Petreaus and Crocker's openness in acknowledging Iran's central role in the war in Iraq, we are seeing for the first time an admission that it is counterproductive to view Iraq in isolation from its neighbors. And this acceptance of the regional nature of the war exposes one of the central risks inherent in the US's current counterinsurgency strategy in Iraq.

Perhaps the central component of the US strategy for stabilizing Iraq is the organization and training of the Iraqi army and police forces. While the majority of Iraq's security forces are loyal to their commanders and to the central government, and support the coalition forces they fight alongside, many Iraqi units have been infiltrated by enemy forces - most prominently, by members of Iranian-sponsored Shi'ite militias.

As Petreaus and Crocker warned this week, if the US Congress or the next administration decides to pull the plug on American-led efforts in Iraq, the results will be horrendous. Both men warned that a rapid withdrawal of US forces would likely cause the disintegration of the country, and Iran can be trusted to snatch key pieces of Iraq for itself. But beyond that, a US withdrawal would set adrift nearly half a million US-trained and armed forces who will undoubtedly seek out new sponsors.

The implications of the disintegration of the Iraqi forces for regional and indeed for global security are terrifying to imagine, and the policy ramifications of such an eventuality are clear. If the US plans on a quick exit from the country, the best thing it could do is to stop training and arming the Iraqi army.

This brings us to the strategic danger implicit in the raw hostility and irrationality of the American Left toward everything related to the Iraq campaign, which was expressed so openly in Congress and in the liberal US media this week. When a formerly responsible Congressional leader like the Chairman of the House Foreign Relations Committee Tom Lantos prefers belittling Petreaus and calling for speedy withdrawal of US forces and a "diplomatic surge" involving negotiations with Syria and Iran over accepting the responsibilities of US global leadership in time of global war, it is clear that something horrible has happened to the Democratic Party.

As The Wall Street Journal put it on Tuesday, the hard Left, which seems to have been catapulted to the leadership of the Democratic Party, "sees politics as not so much an ongoing struggle but a final competition."

The Journal continued, "Under these new terms, public policy is no longer subject to debate, discussion and disagreement over competing views and interpretations. Instead, the opposition is reduced to the status of liar. Now the opposition is not merely wrong, but lacks legitimacy and political standing. The goal here is not to debate, but to destroy."

Much criticism has properly been heaped on the lap of the Maliki government in Iraq for failing to make critical political progress that could improve the long-term prospects for post-Saddam Iraq. Governmental competence is imperative because as Petreaus explained, "the fundamental source of the conflict in Iraq is competition among ethnic and sectarian communities for power at resources."

Petreaus continued, "The question is whether the competition takes place more - or less - violently."

What is notable about Petreaus's statement is that it can be equally applied to all countries. Politics and warfare are both about the relative distribution of power. What separates democracies from tyrannies and failed states is that democracies determine power's distribution through deliberation and debate while tyrannies and failed states are governed by the rule of the gun and the laws of the jungle.

That the political party now in control of both houses of Congress, and well-positioned to form the next administration seems to have discarded this basic truth is far more dangerous for Iraq, the Middle East and indeed the entire world, than the chronic weakness, incompetence, double dealing and corruption of the Maliki government or of any successor government.

The strategy that the US has adopted in Iraq, which has met with such success in the brief time it has been operative, is a long-term strategy. Unless the Democrats regain their senses, it will be difficult for anyone to trust that the US won't simply abandon Iraq, and with it, its responsibility as the leader of the Free World in the midst of a global war.