Our World: Grounded in fantasy 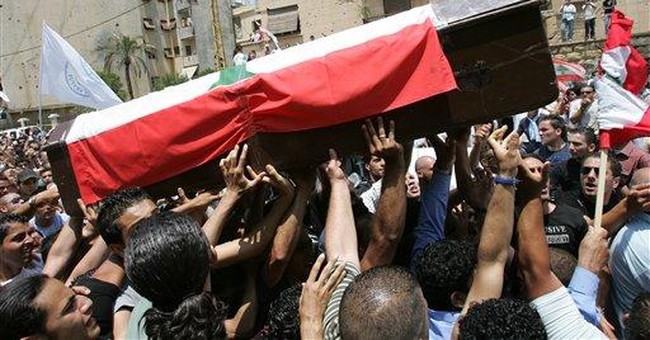 Today, Syria and Iran are ardently advancing their strategic vision for the world through a deliberate strategy of victory by a thousand cuts. Last week's Hamas takeover of the Gaza Strip; Sunday's reopening of the Lebanese front against Israel with the Syrian-ordered rocket attacks on Kiryat Shemona; the now five-week old Syrian ordered low-intensity warfare against Lebanon's pro-Western Siniora government; last week's attack on the al-Askariya mosque in Samarra; the recent intensification of terrorism in Afghanistan and Iran's move to further destabilize the country by violently deporting 100,000 Afghan refugees back to the war-torn country - all of these are moves to advance this clear Iranian-Syrian strategy.

And all these moves have taken place against the backdrop of Syria's refashioning of its military in the image of Hizbullah on steroids and Iran's relentless, unopposed progress in its nuclear weapons program.

For their part, both the US and Israel also have a strategic vision. Unfortunately, it is grounded in fantasy.

Washington and Jerusalem wish to solve all the problems of the region and the world by establishing a Palestinian state in Gaza, Judea, Samaria and Jerusalem. While Israel now faces Iranian proxies on two fronts, in their meeting at the White House today US President George W. Bush and Prime Minister Ehud Olmert will gush about their support for Palestinian statehood. Creepily echoing LSD king Timothy Leary, they will tune out this reality as they drone on about the opportunities that Gaza's transformation into a base for global jihad afford to the notion that promoting the Fatah terrorist organization's control over Judea and Samaria can make the world a better, safer, happier place.

Today Bush and Olmert will announce their full support for Fatah chief and Palestinian Authority chairman Mahmoud Abbas's new government. The US will intensify General Keith Dayton's training and arming of Fatah forces. Israel will give Fatah $700 million. The Europeans and the rest of the international community will give the "moderate, secular" terror group still more money and guns and love. The US will likely also demand that Olmert order the IDF to give Fatah terrorists free reign in Judea and Samaria.

Olmert and Bush claim that by backing Abbas militarily, financially and politically they will be setting up an "alternative Palestine" which will rival Hamas's jihadist Palestine. As this notion has it, envious of the good fortune of their brethren in Judea and Samaria, Gazans will overthrow Hamas and the course will be set for peace - replete with the ethnic cleansing of Judea and Samaria and eastern Jerusalem of all Jewish presence.

Fatah forces barely raised a finger to prevent their defeat in Gaza in spite of the massive quantities of US arms they received and the military training they underwent at the hands of US General Keith Dayton. Bush, Olmert and all proponents of the notion of strengthening Fatah in Judea and Samaria refuse to answer one simple question: Why would a handover of Judea and Samaria to Abbas's Fatah produce a better outcome than Israel's 2005 handover of Gaza to Abbas's Fatah?

They refuse to answer this question because they know full well that the answer is that there is absolutely no reason to believe that the outcome can be better. They know full well that since replacing Yasser Arafat as head of the PA in 2004, Abbas refused to take any effective action against Hamas. They know that he refused to take action to prevent Hamas's rise to power in Gaza and Judea and Samaria. They know that the guns the US transferred to Fatah in Gaza were surrendered to Hamas without a fight last week. They know that the billions of dollars of international and Israeli assistance to Fatah over the past 14 years never were used to advance the cause of peace. They know that that money was diverted into the pockets of Fatah strongmen and utilized to build terror militias in which Hamas members were invited to serve. They know that Fatah built a terror superstructure in Judea, Samaria and Gaza which enabled operational cooperation between Fatah, Hamas and Islamic Jihad terror cells.

So why embrace the fantasy that things can be different now, in Judea and Samaria? Rather than provide rational arguments to defend their view that Hamas's takeover of Gaza is an opportunity for peace, proponents of peace fantasies as strategic wisdom explain vacuously that peace is the best alternative to jihad. They whine that those who point out that Israel now borders Iran in Lebanon and Gaza have nothing positive to say.

Both views ignore the obvious: Gaza has been transformed into an Iranian-sponsored base for global jihad because Egypt has allowed it to be so transformed. Assisted by its Syrian-sponsored Palestinian allies, Hizbullah has rebuilt its arsenals and reasserted its control in southern Lebanon because UN forces in southern Lebanon have done nothing to prevent it from doing so.

No country on earth will volunteer to fight Hamas and its jihadist allies in Gaza. No government on earth will voluntarily deploy its forces to counter Hizbullah and Iran in south Lebanon. This is why - until they fled - European monitors at the Rafah terminal were a joke. This is why Spanish troops in UNIFIL devote their time in Lebanon to teaching villagers Spanish.

So why are Bush and Olmert set to embrace Fatah and Abbas today? Why are they abjectly refusing to come to terms with the strategic reality of the Iranian-Syrian onslaught? Why are they insisting that the establishment of a Palestinian state is their strategic goal and doing everything they can to pretend that their goal has not been repeatedly proven absurd?

Well, why should they? As far as Bush is concerned, no American politician has ever paid a price for advancing the cause of peace processes that strengthen terrorists and hostile Arab states at Israel's expense. Bush's predecessor Bill Clinton had Arafat over to visit the White House more often than any other foreign leader and ignored global jihad even when its forces bombed US embassies and warships. And today Clinton receives plaudits for his efforts to bring peace to the Middle East.

By denying that the war against Israel is related to the war in Iraq; by ignoring the strategic links between all the Iranian and Syrian sponsored theaters of war, Bush views gambling with Israel's security as a win-win situation. He will be applauded as a champion of peace and if the chips go down on Israel, well, it won't be Americans being bombed.

Olmert looks to his left and sees president-elect Shimon Peres. Peres, the architect of the Oslo process which placed Israel's national security in the hands of the PLO, has been rewarded for his role in imperiling his country by his similarly morally challenged political colleagues who just bestowed him with Israel's highest office.

Olmert looks to his left and his sees incoming defense minister Ehud Barak. In 2000, then prime minister Barak withdrew Israeli forces from Lebanon, and enabled Iran's assertion of control over southern Lebanon through its Hizbullah proxy. In so doing, Barak set the conditions for last summer's war, and quite likely, for this summer's war.

By offering Arafat Gaza, 95 percent of Judea and Samaria and half of Jerusalem at Camp David, Barak showed such enormous weakness that he all but invited the Palestinian terror war which Arafat began planning the day he rejected Barak's offer.

For his failure, Barak has been rewarded by his Labor Party, which elected him its new chairman on the basis of his vast "experience," and by the media which has embraced him as a "professional" defense minister.

Olmert looks to his right and he sees how the media portrays Likud Chairman Binyamin Netanyahu and former IDF Chief of General Staff Moshe Ya'alon as alarmists for claiming that Israel cannot abide by an Iranian-proxy Hamas state on its border. He sees that Shas and Yisrael Beiteinu supported Peres's candidacy as president and have joined their fortunes to Olmert's in a bid to block elections which will bring the Right to power.

Israel has arguably never faced a more dangerous strategic environment than it faces today. Yet it is not without good options. It can retake control over the Gaza-Sinai border. It can renew its previously successful tactic of killing Hamas terrorists. It can continue its successful campaign of keeping terrorists down in Judea and Samaria, and it can continue preparing for war in the north. All of these options can be sold to the Left.

But today both Bush and Olmert will reject these options in favor of mindless peace process prattle. They will reject reality as they uphold Abbas as a credible leader and shower him with praise, money and arms. Their political fortunes will be utmost in their minds as they do this. And they will be guaranteeing war that will claim the lives of an unknown number of Israeli civilians and soldiers.

Bush and Olmert should know that when the time for reckoning comes they will not be able to claim, along with Peres and Barak that their hands did not shed this blood. Reality has warned them of their folly. But in their low, dishonest opportunism, they have chosen to ignore reality and amuse themselves with fantasies and photo-ops.