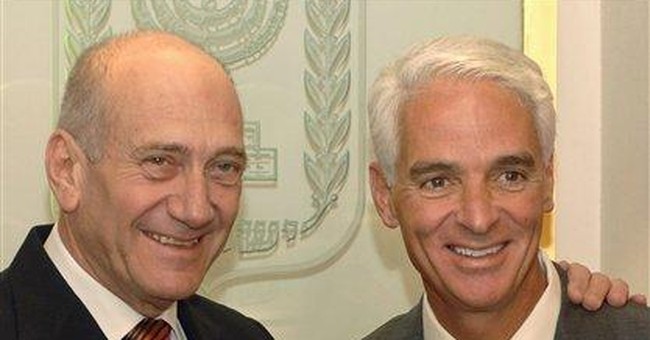 Prime Minister Ehud Olmert's meeting with US President George W. Bush next week is supposed to serve as a preparatory stage ahead of a planned presidential address on the Palestinian conflict with Israel. According to media reports, Bush believes that five years after his last speech on the subject on June 24, 2002, the time has come for an updated assessment of the situation.

A lot has happened in the last five years both in Israel and in Palestinian society. A good way to understand our present circumstances is to recall that last speech, where Bush laid out his "vision" to bring peace to the Middle East by establishing an independent, democratic Palestinian state next to Israel on the west bank of the Jordan River on land that the League of Nations mandated in 1922 was to be reserved for the Jewish homeland.

Indeed, the president's words speak for themselves. Addressing the Palestinians, Bush said: "Peace requires a new and different Palestinian leadership, so that a Palestinian state can be born.

"I call on the Palestinian people to elect new leaders, leaders not compromised by terror. I call upon them to build a practicing democracy, based on tolerance and liberty."

"A Palestinian state will never be created by terror - it will be built through reform. And reform must be more than cosmetic change, or veiled attempts to preserve the status quo."

"The United States will not support the establishment of a Palestinian state until its leaders engage in a sustained fight against the terrorists and dismantle their infrastructure."

Bush concluded, "This moment is both an opportunity and a test for all parties in the Middle East: an opportunity to lay the foundations for future peace; a test to show who is serious about peace and who is not."

ISRAEL RESPONDED enthusiastically to the president's challenge. Successive governments froze expansion of Jewish communities beyond the 1949 armistice lines. The limitations placed on Jewish building are so draconian that even in cities like Ariel and Ma'aleh Adumim, people cannot receive building permits.

Not only did Israel freeze building in Judea and Samaria, Israel expelled all Israeli residents of Gaza and northern Samaria in order to render the areas Jew-free to the Palestinians. The people of Israel elected leaders who endorsed Bush's vision of denying the rights of Jews to live in the territories he has set aside for a prospective Palestinian state.

For their part, the Palestinians held open and free elections in January 2006. They chose to deny parliamentary representation to non-terrorists, and placed Hamas at the head of the Palestinian Authority. They turned newly Jew-free Gush Katif, which Israel surrendered unconditionally, into terror training camps. They turned the ruins of the communities of northern Gaza into launch pads for missile and rocket attacks against Ashkelon and Sderot. They turned the abandoned international border between Gaza and the Sinai into a global jihadist highway through which terrorists from the Iranian Revolutionary Guards, Hizbullah, Hamas and al-Qaida, as well as massive quantities of armaments have flooded into Gaza.

For the residents of Gaza, who overwhelmingly support Hamas, the situation has become particularly dire. Since foreign correspondents have abandoned the area, no one seems to notice or care about the fact that in Gaza today, children are murdered in front of their parents, passengers are removed from cars and shot in the streets, and doctors are murdered in hospitals as patients are violently removed from life support systems and taken out of operating rooms. No one bats a lash as jihadists bomb pubs and Internet cafes. No one hears as Gazans pray for a return of the so-called "occupation."

Egypt serves as a principal support base for the Palestinian terror networks by enabling the flow of terrorists and arms into Gaza and by acting as a central hub of annihilationist anti-Semitic propaganda. Saudi Arabia oversaw the establishment of the Palestinian unity government, which transformed Fatah into a junior partner in the Hamas government that carries out terrorism and enjoys the financial support of the Saudis and the Iranians (and Norwegians).

Iran and its client state Syria call the shots for the Palestinians today. As last summer's war demonstrated, in the wake of Israel's withdrawal from Gaza, the Iranians were able to unify the Palestinian and Lebanese fronts in the global jihad. Iran manages both fronts while it proceeds unfettered in its quest for atomic bombs. Syria daily issues threats of war. And both countries oversee the insurgency in Iraq.

So of all the components of Bush's vision for peace between Israel and the Palestinians, the only one that has been implemented is his demand that Israel freeze building activities in Israeli communities beyond the 1949 armistice lines.

WERE OLMERT to devote his meeting with Bush to reciting a summary of these cold, hard facts, he would be doing an important, even vital service to the country. Were the president to receive and accept a credible report on the situation on the ground from Israel's prime minister, Bush's next speech would have to look something like this:

Five years ago, I set out my vision for peace between the Arab world, and particularly the Palestinian people and Israel. I still believe in my vision of a new democratic, antiterrorist state of Palestine committed to the rule of law and human rights and living side by side in peace with the existing democratic, antiterrorist, human-rights respecting, law-abiding State of Israel.

Tragically, developments over the past five years demonstrate that today, it is impossible to realize this vision and, therefore, the time has come to set it aside.

With US support, the Palestinians held free elections in January 2006. Rather than choose leaders not compromised by terror, the Palestinians preferred to choose the Hamas and other terrorist organizations to lead them. By so choosing, the Palestinians showed the world that they reject peace and have chosen the path of terror and war.

While Palestinian President Mahmoud Abbas has publicly condemned acts of terror and murder, in spite of the generous support he has received from the United States and Israel, to date he has opted not to effectively combat terror. Rather than educate his nation to embrace peace and tolerance, Abbas has overseen the Palestinian Authority school system, which teaches the children of Palestine to choose death over life and to seek Israel's destruction rather than the establishment of a free, democratic state that would live at peace with Israel.

This past June, Abbas decided to form a unity government with Hamas. By doing so, Abbas effectively abandoned peace as a strategy.

Five years ago I said, "The United States will not support the establishment of a Palestinian state until its leaders engage in a sustained fight against the terrorists and dismantle their infrastructure."

Since none of the Palestinian leaders are engaging in a sustained fight against terrorists, the United States recognizes that today Israel has no partner for peace. I am left with no choice but to withdraw American support for Palestinian statehood at this time.

Since Israel has no peace partner, it is clear that the Israelis must take the necessary steps to protect themselves. Since Israel's withdrawal from Gaza in 2005, Gaza's international border with Egypt has turned into a thoroughfare for global terror with arms and personnel coming in from Iran, Egypt, Lebanon, Syria and beyond. I am disappointed with the fact that to date, Egypt has taken no effective action to block the terror traffic from its territory into the Palestinian Authority.

Furthermore, Israelis have the right to live free of fear of missile and rocket attacks on their towns and villages. Today's situation, where Israeli communities bordering Gaza are exposed to daily barrages of mortars and rockets launched by terrorists in Gaza, is unacceptable and intolerable.

Over the past two years since Israel withdrew from Gaza, I have come to recognize a flaw in the two-state model. Until now, one of the guiding assumptions of the two-state model is that the Israeli settlements located beyond the 1949 armistice lines constitute an obstacle to peace. But we see that the evacuation of the settlements in Gaza and the northern West Bank only caused a further radicalization of Palestinian society.

Aside from that, it is time to recognize that the Palestinian demand to establish a state on land emptied of all Jewish presence is an immoral demand. It is impossible to expect that the Palestinians will conduct internal reforms when the international community gives them the legitimacy to base their nationalism on ethnic cleansing and the rejection of the humanity and moral rights of the Jewish nation. As a result, and without prejudicing future negotiations between Israel and the Palestinians, today the United States recognizes the right of Israelis and Palestinians to build their communities in a manner that provides for the natural growth of their populations.

The forces in the Palestinian Authority who fight Israel, and who educate their children to seek death by terror, are supported by the same states that support Hizbullah in Lebanon and the insurgents in Iraq. Iran and Syria cannot expect that their support for terror in Israel, Lebanon and Iraq will go unnoticed. While Iran's President Mahmoud Ahmadinejad issues near daily threats to wipe Israel off the map, and Syria threatens Israel with war, they both must understand that Israel is an ally and a friend of the United States. We support Israel and its right to defend itself.

We hope that the day will finally come when the Palestinian people reject terror and hatred and embrace democracy and peace. On that day, the American people will be proud to look to the Palestinians to join the people of Israel and so many other nations of the world as our allies and friends.