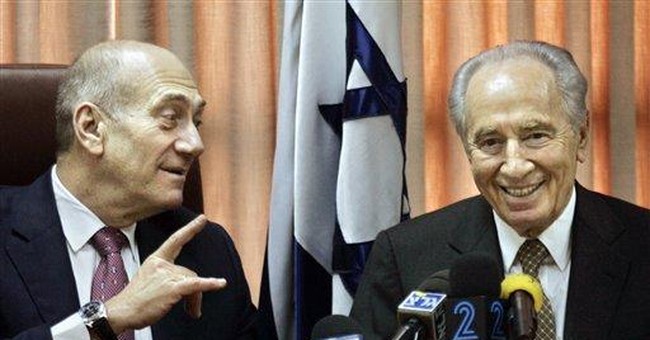 Tomorrow Israel's parliamentarians will convene to elect the next president of Israel. After Shas's council of elders decided last week to throw the party's support behind Deputy Prime Minister Shimon Peres's candidacy, Peres's election seems to be a foregone conclusion.

That this is the case is a troubling demonstration of the corruption of Israeli politics. Indeed, more than anything, Peres's frontrunner status in the three-way race is a testament to his success in undermining the honor and honesty of Israeli politics.

Peres is a dishonorable man. Notwithstanding his contributions to the state in his younger years, Peres's behavior over the past quarter-century, both in and out of office, has redounded to the diminution of Israel's standing in the region and the world and to the endangerment of the lives of Israeli citizens.

In 1981 Peres, then opposition leader, nearly placed Israel in danger of nuclear annihilation by working to undercut then prime minister Menachem Begin's plan to attack the French and Italian-built Iraqi nuclear reactor at Osirak.

Begin was forced to delay the air strike which denied Saddam Hussein the wherewithal to obliterate the Jewish state for a number of months after Peres, who had been leaked knowledge of the planned attack, confronted Begin and implicitly threatened to leak the ultra-secret operation to others.

One of the factors that weighed on Begin's decision to attack was the fear that were Peres to win the then approaching 1981 Knesset elections and replace him as premier, Peres would enable Iraq to acquire the means to wipe Israel off the map and assert its hegemony over the global oil market.

IN 1986, as prime minister, Peres likely became the the first leader in history to willfully incriminate and abandon an agent of his government who had endangered his own life to defend Peres's country's national security. Jonathan Pollard is today serving the 22nd year of a life sentence in US Federal prison.

Pollard has been subject to discriminatory treatment by the US justice system. No agent in the employ of a state allied with the US ever received a comparable, or even similar sentence for his offense. But then, no country has ever treated its agent as wretchedly as Israel has treated Pollard.

Two weeks ago Pollard's representatives sent a letter to all members of Knesset entreating them not to support Peres's candidacy. Pollard outlined how, when confronted on the Pollard affair by then US secretary of state George Schultz, Peres mendaciously claimed to have had no knowledge of Pollard's service. It was Peres, Pollard alleges, who spread the lie that Pollard was a soldier of fortune. At Schultz's request, Peres ordered the Defense Ministry to return to US authorities all the documents that Pollard had transferred to Israel.

In so doing, Peres actively aided the US in incriminating his agent. Peres later lied to the Eban Committee, formed in 1987 by the Knesset to investigate the Pollard affair. Peres justified his unseemly action by mendaciously claiming that he had received the US's agreement that the documents would not be used against Pollard. Those documents formed the basis of the prosecution's case against Pollard.

As Pollard wrote: "My case is the first and only case in the history of modern espionage in which a prime minister actively assisted in the indictment and prosecution of his own country's agent."

Then there is Peres's stewardship of the 1993 Oslo accord with the PLO and the "peace process" with the PLO which followed. As foreign minister in Yitzhak Rabin's government, Peres knowingly subverted Rabin's policy of not negotiating with the PLO by sending his own emissaries to Oslo behind the back of the prime minister to negotiate with senior PLO terrorists. Peres then rammed the accord down Rabin's throat, dragging along an unwilling public.

It is difficult to summarize the devastating impact that Peres's notion of gaining peace by empowering Yasser Arafat, the godfather of modern terrorism, arming his terror armies and deploying them on the outskirts of Israel's major cities has had on the country. In human cost, it can be easily argued that some 1,500 Israelis who have been killed in terror attacks and battles with terror militias since 1993 would likely be alive today had it not been for Peres's decision to "take risks for peace."

Beyond the massive human cost of Oslo, Peres's decision to embrace the PLO corrupted the the political system, the legal system, the IDF General Staff, the media and Israeli culture.

Politicians were openly bribed for their support of the agreement. Politicians who did not support the agreement found themselves under criminal scrutiny on charges that rarely brought convictions.

IDF officers soon discovered that their chances of promotion were directly related to the enthusiasm with which they embraced terrorists as partners and accepted the notion that Israel should appease rather than fight its enemies. Several IDF generals began lucrative business partnerships with senior Palestinian security bosses immediately after retiring from the military.

Opponents of the Oslo process were systematically denied their civil rights as the government sought to criminalize and demonize them. Referring to those who opposed the strategy of placing the Jewish state on a par with a terrorist organization as "enemies of peace," Peres sought to link these responsible citizens to terrorists murdering Israeli civilians in suicide bombings.

The Israeli media corrupted public debate by silencing and demonizing voices of opposition. The education system of Israel was corrupted when schoolchildren were provided with new "peace friendly" textbooks which taught a revisionist history of the state that called into question the morality and legality of the establishment of Israel.

With Peres at the helm of the Foreign Ministry, Israel's public diplomacy arm was summarily canceled. Peres explained that Israel didn't need to engage in public diplomacy because everyone would support Israel now it had embarked on a path to peace.

Peres's move was logical. For Israel to defend itself in the realm of ideas it would be necessary to explain why we have rights to our land and why our enemies, among them the PLO, are wrong to attack those rights. Pointing out this glaring truth would call into question the entire rationale of the Oslo process. So, at Peres's direction, Israel surrendered not just territory to the PLO. It surrendered its right to historical truth.

Peres' transformation of the Foreign Ministry into a public relations organ for Fatah and other PLO terrorists, meanwhile, has seriously and perhaps permanently damaged Israel's international diplomatic position.

Throughout the years that have passed since Rabin's disastrous handshake with Arafat on the White House lawn, Peres has built his international standing by courting European and American politicians and donors who oppose Israel.

In the wake of the brutal battle between Palestinian terrorists and IDF soldiers in Jenin refugee camp during the course of Operation Defensive Shield, Larsen played a key role in disseminating the libel that Israel had committed a massacre in the camp. Standing in the UN-managed terror camp, Larsen said "Israel has lost all moral ground in this conflict."

A week later Makor Rishon revealed that in 1999 the Shimon Peres Center for Peace had given Larsen and his wife, Norwegian ambassador Mona Juul, a cash payment of $100,000. Larsen was then a board member of the Peres Center and the Norwegian government was one of the center's major donors.

Investigative reporter Yoav Yitzhak at the time reported statements by Labor party members claiming that the payment to Larsen and Juul was a kickback for their intervention on Peres's behalf with the Nobel Peace Prize Committee in 1994.

In one of Peres's many bids to block all criticism of Arafat, he strenuously refused to press the terror leader for information, or even politely inquire, about the fates of Israeli soldiers Zachary Baumel, Tzvi Feldman and Yehuda Katz, who went missing in Lebanon on June 11, 1982 during the battle at Sultan Yakoub. In December 1993 Arafat had given Rabin half of Baumel's dogtag, but then refused to give any more information about the fate of Baumel and his comrades.

Last week, a representative of the Baumel, Feldman and Katz families sent a letter to Prime Minister Ehud Olmert demanding that he withdraw his support for Peres's candidacy for president. The families asserted that for the past 25 years Peres has refused to raise the issue of their sons' whereabouts in his negotiations with the Palestinians and the Syrians. Peres's refusal to demand information on their whereabouts, they argued, renders him unworthy of the office of head of state.

It has been argued that since the office of president is largely ceremonial, a President Peres will be able to do little damage to the country.

But this assertion ignores the fact that Peres has never seen himself bound by the formalities of office. As foreign minister under Rabin he overstepped his authority when he directed illegal negotiations with the PLO in Norway. As foreign minister under Sharon, Peres used his office to undermine President George W. Bush's call for a reform and democratization of Palestinian society.

As head of the Peres Center and international conference circuit star, he worked to undermine the international credibility of the Netanyahu government. It beggars belief to say that as president, Peres would limit his actions to accrediting ambassadors and signing pardons for criminals.

Yet for all that, if current assessments of the balance of support among the candidates for president are correct, then Peres will tomorrow be elected to head the country. And if this does come to pass, all that can be said is that we reap what we sow.