Statecraft in the absence of statesmen 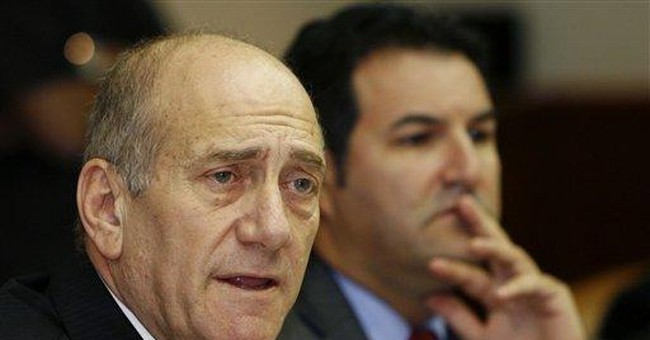 Over the past week, Ma'ariv has reported on two separate diplomatic initiatives that seem to be coming into line. First, there is the possibility that Prime Minister Ehud Olmert will open negotiations with Syria on the surrender of the Golan Heights to Damascus. Second, the Jordanians are raising the possibility of forming a confederation with the Palestinians in Judea and Samaria.

Any analysis of the reasonableness of these initiatives must begin with two questions. First, do the relevant parties share enough common interests to enable them to reach an agreement that will be mutually beneficial? Second, do the sides have leaders who are competent to properly identify those interests and to work to advance them?

According to Ma'ariv, "The prime minister has... become convinced that negotiations with Syria and a possible peace agreement will significantly alter the regional strategic situation and facilitate the isolation of Iran and a solution to the problem with Hizbullah.

"This is especially the case," the newspaper reported, "against the backdrop of the collapse of Fatah and of [Palestinian Authority Chairman Mahmoud Abbas, aka] Abu Mazen, and the fact that there is no chance for a diplomatic initiative with the Palestinians in the near future."

The report added that the IDF's General Staff believes that Israel can avert war with Syria by negotiating the surrender of the Golan Heights to Damascus.

Unfortunately, all of Olmert's rationales for opening negotiations with Syria are based on false assumptions. A review of the results of the US's current, much-less radical bid to appease Syria in Iraq demonstrates this clearly.

The insurgency being waged against US-led coalition forces in Iraq today is directed by Syria and Iran. In an attempt to decrease the dimensions of the war, last month the Americans opened direct, high-level contacts with Damascus. First, Speaker of the House of Representatives Nancy Pelosi paid a visit to Syrian dictator Bashar Assad.

Pelosi, who supports a US retreat from Iraq, praised the Baathist regime and so ended the isolation Damascus has been relegated to since it ordered the assassination of former Lebanese prime minister Rafik Hariri in February 2005.

Although the Bush administration condemned Pelosi's visit, weeks later it followed her lead. At the beginning of the month, Secretary of State Condoleezza Rice held a meeting with her Syrian counterpart, Walid Muallem, in Sharm e-Sheikh.

The Americans hoped that direct contacts with Syria would moderate its behavior. Unfortunately, the opposite has occurred. Far from moderating Syria, US moves to mollify it have served to embolden Syria to advance its hostile policies. In the aftermath of Pelosi's visit, the regime cracked down on internal opposition, rounding up dissidents and sentencing them to prolonged prison terms.

Rice's meeting with Muallem failed to put a damper on Syrian sponsorship of the insurgents. On Monday, a US official in Iraq said, "Our best estimate is that 85 to 90 percent of all the suicide bombers are foreign. Ninety percent plus come through Syria."

Beyond Iraq and internal dissent in Syria, the legitimacy Washington has conferred on Damascus is emboldening the Syrians to destabilize Lebanon. The Fatah Islam Palestinian jihadist group that is now leading the hostilities in northern Lebanon is a creation of Syrian intelligence. Today the Syrians are keen to destabilize Lebanon in a bid to intimidate Lebanese lawmakers into rejecting the UN tribunal which is set to try Syrian officials for their role in Hariri's assassination.

All of these Syrian actions point to the clear conclusion that the American appeasement efforts have backfired. Were Israel to similarly seek to appease Damascus, and to do so by far more radically offering to surrender the strategically vital Golan Heights to Syrian control, far from diminishing the prospects of war, Israel would likely exacerbate the likelihood of a Syrian or Syrian-sponsored strike against it.

Similarly, it is doubtful that opening negotiations on an Israeli withdrawal from the Golan Heights would weaken Syria's relations with Iran. Why would Syria consider distancing itself from Teheran when its close alliance with the ayatollahs is what is provoking the US and Israel to mollify it?

So if offering to discuss an Israeli surrender of the Golan Heights will increase the probability of war and embolden the Syrians to intensify their alliance with Iran, the only remaining rationale for speaking to them is Olmert's desire to have some sort of diplomatic platform to stand on.

Here the issue of a leader's competence to advance his nation's interests through diplomatic initiatives comes into play. By expressing a willingness to imperil the security of the country by opening talks with Syria that will only radicalize Damascus still further, Olmert is demonstrating that he is incapable of responsibly advancing Israel's interests. Indeed, his willingness to engage in surrender talks with Damascus shows that he doesn't even understand what Israel's national interests are.

If Olmert wishes to prevent the coming war, he should be preparing for it. This he must do by highlighting Syria's radicalism and by neutralizing Syria's terror networks in Gaza, which would be used against Israel in any war scenario.

SO WHILE there is no possibility of launching a diplomatic effort with Syria or the Palestinians, what about the Jordanian initiative?

According to the Ma'ariv report, the Jordanian plan is based on a recognition that with Hamas in control of the Palestinian Authority, Israel has no Palestinian partner to whom it could surrender Judea and Samaria. In light of this, Israel is incapable of adopting the so-called Arab peace initiative, which demands that Israel withdraw its citizens and military forces to behind the 1949 armistice lines.

The Jordanians are offering to fill the void by replacing the Palestinians. Israel, they say, should give Jordan Judea and Samaria as part of a Jordanian-Palestinian confederation under Hashemite control. In short, the Jordanians are resuscitating the view that Jordan is Palestine. King Abdullah is using former Jordanian prime minister Abed Salam Majali as his envoy to convince Israelis to accept this newest idea.

An assessment of the opportunities and threats inherent in this offer must begin with an analysis of Jordan's interests. Bluntly stated, the Hashemite monarchy finds itself firmly lodged between the Iraqi rock and the Palestinian hard place and so is in danger of being overthrown. The possibility that US forces will withdraw from Iraq without first stabilizing the country constitutes an existential threat to the Hashemites, who understand that after defeating the Great Satan, Jordan will be the next target on the Syrian- and Iranian-sponsored insurgents' list.

As to the Palestinians, since Hamas won the PA elections last year, the jihadist group, and its sister organization the Muslim Brotherhood, have seen a steep rise in their popularity in Jordan, where more than 70% of the population are Palestinians. The Jordanian offer to take over Judea and Samaria can therefore be seen as a bid to ride the Palestinian tiger in the hopes of taming the beast before it devours Jordan.

In contrast to the situation with Syria, Israel's national interests overlap those of Jordan. Israel, too, will be imperiled by a resurgent eastern front in the event of an American pullout from Iraq. Israel, too, will pay a steep price if the jihadist forces on both sides of the Jordan River unite.

Yet, given the dangers that both countries face, it would be inexcusable for Israel to even consider transferring control over the Jordan Valley to the Jordanian military. At the same time, the societal fragmentation that would ensue from an Israeli withdrawal from its heartland in Judea and Samaria would undermine Israel's ability to rally as a society against external enemies.

While the gulf between what Jordan proposes and what Israel can accept is large, the fact remains that the states' shared interests are significant enough to form the basis for mutually beneficial discussions. As MK Benny Elon has been arguing for years, Israel could offer Jordan functional sovereignty over the Palestinians in Judea and Samaria. At the same time, Israel could assert its sovereignty over what the Oslo accords refer to as Area C. Area C includes all of the Israeli communities in Judea and Samaria, the hinterlands and the Jordan Valley.

The assertion of functional sovereignty by Jordan over the Palestinians in Judea and Samaria would include the return of their Jordanian citizenship, which the late King Hussein abrogated in 1988. Such functional sovereignty would undermine the PA's political rationale and could act as a moderating force for Palestinian society as a whole - both in Judea and Samaria, and in Jordan.

The assertion of Israeli sovereignty over Area C would preserve Israel's ability to defend itself against a resurgent eastern front. It would also be able to continue to protect the Hashemite kingdom from violent overthrow.

All in all, bearing in mind Israel's shared interests with Jordan, the Jordanian initiative can form the basis for discussions that could lead to the first agreement between Israel and its neighbors that could strengthen Israel and promote the chances of peaceful coexistence with the Palestinians, to the benefit of all.

BUT HERE we return to the question of leadership. Israel's ability to advance a confederative arrangement between the Palestinians and Jordan while ensuring Israel's continued control over Area C is wholly dependent on the skill of its leaders.

Sadly, it is impossible to believe that Olmert, who is willing to endanger the country by engaging Syria, would be capable of conceptualizing, let alone managing, such delicate discussions. Indeed, in all likelihood, were Olmert to begin such discussions, he would do so while running roughshod over Israel's security. And by doing so, he would cancel the possibility of reaching a mutually beneficial arrangement for years to come.

This, then, points to the greatest failure of the Olmert government. Not only is it incapable of recognizing dangers. It is also blind to opportunities.