Our World: Denial is not a strategy 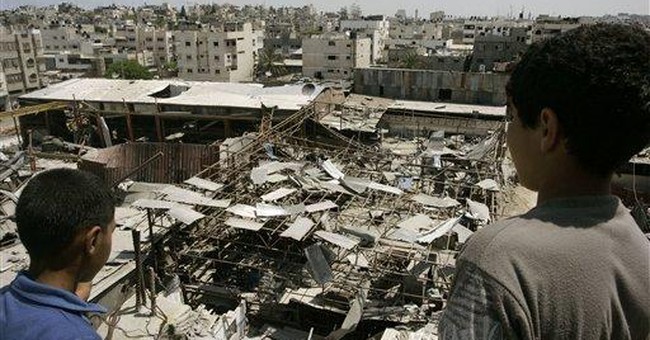 The Olmert-Livni-Peretz government is incapable of learning. This is the only possible explanation for its handling of the Palestinian assault on southern Israel which has seen some 200 rockets and missiles fall on Sderot, southern Ashkelon and the surrounding areas in the past week alone.

On Sunday, the security cabinet met and discussed options for contending with the situation. At the outset, it nixed launching a large-scale assault on Gaza in favor of continuing pinpoint air strikes against Hamas leaders.

The security cabinet defined Hamas as Israel's enemy in the current campaign. The government discussed the option of transferring more arms and money to Fatah, which serves as a junior partner in the Hamas "unity" government. Such a move would simply follow the government's move last week to allow up to 500 Egyptian-trained Fatah fighters to enter the Gaza Strip.

The security cabinet's discussion took for granted that it is not Israel's responsibility to secure Gaza's border with Egypt. As opponents of the Israeli withdrawal from Gaza warned, that border has served as a terror thoroughfare since the IDF withdrew its forces from the area in September 2005. Through the border, Gaza has been inundated with advanced weaponry. Terrorists from abroad have entered Gaza at will. Terrorist from Gaza freely leave the area for terror training in Iran, Syria and Lebanon and then return.

Rather than ordering the IDF to reassert control over the border, the security cabinet considered two other options. The Foreign Ministry recommends that an international force be deployed to the area, much like the UNIFIL forces in Lebanon. Defense officials think it would be better to have Egypt secure the border much as the Lebanese army now sits on Israel's northern border.

Unfortunately, all of the security cabinet's strategic assumptions are either wholly or partially incorrect. As a result, the options it adopted or continues to consider will either have no strategic impact on Israel's security predicament vis-a-vis Gaza or will adversely affect Israel's national security.

IN ITS definition of the parameters of its debate and policy options, the government displayed clearly that it has learned nothing from its defeat at the hands of Iran's proxy army in Lebanon - Hizbullah - in last summer's war.

In the first instance, by limiting its definition of Israel's enemy in Gaza to Hamas, the government obfuscates the true strategic reality which confronts it. Hamas does not fight Israel alone. It fights in full partnership with the Fatah terror group. Indeed, Fatah has carried out more terrorist attacks against Israel over the past seven years of the Palestinian jihad than Hamas. Throughout the now 7-year-old war, Fatah and Hamas have willingly collaborated in terrorist attacks against Israelis.

Fatah members, including thousands of gunmen from the official PA security forces, often also serve in Hamas. Weapons that Israel has transferred to Fatah through various PA security forces over the past 13 years have been used to murder Israelis by Fatah as well as Hamas and Islamic Jihad terrorists. And of course, Fatah now serves as Hamas's junior partner in the Palestinian "government." The Olmert-Livni-Peretz government does not merely refuse to acknowledge that Fatah is also Israel's enemy. It actively supports Fatah and upholds it as Israel's ally. In this it is repeating and indeed aggravating its strategically disastrous treatment of the Lebanese government last summer.

IN THE immediate aftermath of Hizbullah's strike against the IDF position in northern Israel last July 12 which led to the abduction of reservists Eldad Regev and Ehud Goldwasser and precipitated the war, Prime Minister Ehud Olmert rightly stated that the Lebanese government is responsible for everything that occurs in Lebanon. Yet after receiving orders from US Secretary of State Condoleezza Rice, the Olmert-Livni-Peretz government did an about face and became a vocal supporter of the Lebanese government.

During the cease-fire talks, Israel demanded that the Lebanese military be deployed to the border even though some 40 percent of its soldiers are Shi'ite and known for their sympathy and frequent collaboration with Hizbullah. Now deployed along the border, Lebanese forces have opened fire on IDF border patrols and have done nothing to prevent Hizbullah's rearming and reassertion of control over southern Lebanon.

It is certainly true that to some degree the Lebanese government's support for Hizbullah is the consequence of its weakness. Were it strong enough, perhaps it would not be so tolerant of Iran's army in Lebanon. But be that as it may, Israel's strategic analysis should be informed not by what the Lebanese government might wish to do, but by what it actually does.

IN STARK contrast to the Lebanese government, Fatah is far from an unwilling collaborator with Hamas. Like Hamas, Fatah leaders openly call for Israel's destruction. Fatah uses the same techniques as Hamas to indoctrinate Palestinian society to seek the genocide of the Jewish people. And yet, Israel's support for Fatah is far greater than its support for the Siniora government.

Israeli officials travel the globe ratcheting up support for Fatah. The Olmert-Livni-Peretz government bases its national policies of land giveaways on Fatah's fictional moderation. The government raises money for Fatah more energetically than it raises money for the Israeli economy. And it allows the US and the Egyptians to arm and train Fatah terrorists.

Equally alarming is the security cabinet's discussion of how to secure Gaza's border with Egypt. Rejecting offhand the notion that the IDF should secure the border, the government limited debate to finding someone else to secure southern Israel.

For the past decade, the only policy that the Foreign Ministry has had for dealing with sub-national terror campaigns against Israel is for the IDF to perform a sound-and-light show for a few days that ends with the entry of the deus ex machina in the form of a foreign force which will save the day. In advancing this policy, the Foreign Ministry willfully ignores the fact that for the past 59 years, Israel has had only negative experience with foreign forces.

These forces consistently serve as a buffer force behind which Israel's enemies arm, train and launch attacks against Israel. When Israel is forced to respond, it is roundly condemned for doing so by the same international forces behind which its enemies built their forces and launched their attacks.

By recommending the deployment of international forces in Gaza, the Foreign Ministry demonstrates that it remains in denial of the plain fact that it was the government's willingness to listen to the Foreign Ministry's prescriptive advice to conduct limited, ineffective air assaults on Hizbullah and sue for a cease-fire with international forces in last summer's war which led to Israel's defeat.

Then of course there is the issue of Egyptian forces. Here too, the comparison with Lebanon is instructive. For the past seven years, the Egyptians have been for the Palestinians what Syria is for Hizbullah. Namely, the Egyptians enable the Palestinians to conduct their war against Israel by arming them and providing them with international support. Just as the Syrians will not stop weapons shipments to Hizbullah, so Egypt will not stop shipments to Palestinian terror forces in Gaza.

FINALLY OF course, there is the issue of the goal of the current campaign. As was the case last summer towards Hizbullah, today the Olmert-Livni-Peretz government has not set for itself the goal of defeating Hamas. Rather the goal of the current operations in Gaza is to send Hamas a message. Like last summer, today the government hopes that by killing a sufficient number of Hamas terrorists, it will induce the organization to stop attacking Israel.

But of course, by limiting its goal in such a way, the message that Israel is sending is not that Hamas should stop attacking Israel. By refusing to fight to victory, Israel is telling Hamas that it cannot lose, which is to say, it can go on fighting forever.

Perhaps the most frustrating aspect of the government's refusal to understand the lessons of the last war and to apply them in the current battle is that Israel has far more options for defeating its enemies in Gaza than it had in Lebanon.

Gaza is a small territory and in contrast to Lebanon, Israel has the ability to take control of ingress and egress from the area. So too, Israel's intelligence capabilities are far greater in Gaza than in Lebanon. Furthermore, the enemy Israel confronts in Gaza is not as well-armed or well-trained as Hizbullah.

Aside from all that, Israel controls Gaza's economy. Israel sells Gaza its water and electricity. Were Israel to decide to stop selling water or electricity to Gaza, its enemies would be hard-pressed to function.

All of these relative advantages that Israel can bring to bear in Gaza would enable Israel to cause long lasting damage to all of its enemies operating in the area while minimizing losses to its forces and civilians. But to take proper advantage of any of its strategic and operational assets, the government must first learn the proper lessons of the last war. Its refusal to do so bodes ill for the future.