The master politician and us 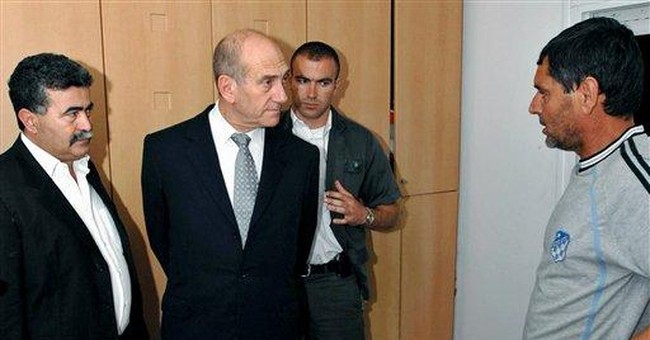 Monday, The New York Times reported that in just a few weeks, Iran will be capable of building nuclear bombs. The Times report, which was largely substantiated by the Chairman of the International Atomic Energy Agency Muhammad el-Baradei, means that in just a matter of months, Israel is liable to find itself in danger of being wiped off the map.

This grave development was barely noted by the Israeli media. They were busy with other matters.

There was the State Cup soccer championship this week. And that sudden rainstorm in Jerusalem that forced the government to cancel the celebrations of the 40th anniversary of the capital's liberation was a very big deal. Then, of course there is the Palestinian onslaught against southern Israel which has turned Sderot into a ghost town.

But the primary reason that the Israeli media are ignoring the rapidly gathering mushroom cloud is because Prime Minister Ehud Olmert is a master politician.

Two weeks after the Winograd Committee's interim report found Olmert responsible for Israel's defeat at the hands of Iran's army in Lebanon last summer, almost no one seems to remember there was a report. Olmert has removed his incompetence from the pubic agenda.

With no support from any quarter of the country, Olmert clings to power through his successful use of the political art of distraction. His response to the public outcry that the Winograd Committee's report unleashed was to change the subject.

Rather than contend with the calls for his resignation, Olmert turned his guns on his deputy, Foreign Minister Tzipi Livni. After he successfully outmaneuvered his not terribly bright and politically unsavvy colleague, the media completely forgot about the issue of his incompetence to lead and placed their spotlights on Livni's pathetic political implosion.

Last week, Olmert used the Supreme Court-ordered publication of his testimony before the Winograd Committee as an opportunity to attack the panel that he himself appointed. And again, rather than report on the dangers besetting Israel as a result of Olmert's incompetence, the media gave extensive coverage to Olmert's request to reappear before the committee.

In his most recent gambit, this week Olmert turned his guns on State Comptroller Micha Lindenstrauss. As UN nuclear inspectors discovered Sunday that Iran is currently operating 1,300 centrifuges at its nuclear facility at Natanz, Olmert - the seasoned attorney - had his personal attorneys send a 58-page letter to Attorney-General Menachem Mazuz requesting that he open a criminal probe against Lindenstrauss.

From the outset, Olmert and his lawyers knew that Mazuz would reject their request to investigate the comptroller for his investigation of Olmert's below market price purchase of his luxury home in Jerusalem. But that was beside the point.

As far as they were concerned, the maneuver was an out and out success. The prime minister of Israel achieved his goal: for two days, his fight with Lindenstrauss and not his unfitness to lead the country was the story of the day.

There is little correlation between Olmert's failure as a national leader and his success as a party politician. Two weeks after 150,000 people crowded into Rabin Square in Tel Aviv demanding his resignation for his failed leadership during last summer's war, the protest is all but forgotten and Olmert is sitting pretty. His governing coalition, and particularly his partnership with Shas and Yisrael Beiteinu, is rock solid.

The consequences of the disparity between his professional and political capabilities couldn't be worse for the country. Olmert, the major league politician, sits securely on his perch while Olmert, the little league leader, is plunging us into a new war, which like the last one, he is incapable of winning.

The decision to deploy a few tanks in northern Gaza on Thursday, like the decision to send a few planes to bomb a few targets over Gaza, is not part of an overall strategy aimed at defending southern Israel from rocket and mortar fire. Olmert, like his friend former prime minister Ehud Barak at the start of the Palestinian terror war seven years ago, is cynically exploiting the IDF.

Rather than give the military an order to defeat our enemies, Olmert, like Barak before him, has ordered the IDF to perform a sound and light show for the public which demands that the government defend it.

Olmert's refusal to order a serious strike in Gaza has brought about the effective abrogation of Israeli sovereignty over Sderot and the Western Negev. It is impossible to speak of Israel as a properly functioning, sovereign state when its citizens are forced to flee their homes because their government refuses to protect their lives and property.

And Sderot is not alone. Just as the opponents of the 2005 withdrawal from Gaza warned, Israel's absence from the area enabled Gaza's transformation into a new nexus of global jihad. As a result of the incompetence and paralysis of the government in contending with this foreseen development, the fate of Sderot will soon become the fate of Ashkelon and Kiryat Gat.

Hamas, Fatah, Islamic Jihad, Hizbullah, al-Qaida, the Iranian Revolutionary Guards, the Popular Resistance Committees and their friends are not all sitting in Gaza, armed to the teeth with anti-tank and anti-aircraft missiles and tons of explosives just to kill one another. For nearly two years, the open border between Gaza and Egypt has enabled terrorists and their weaponry to flood Gaza. The increased capacity has placed an additional 200,000 Israeli citizens within range of their rockets and missiles.

The horrific images of the mothers and fathers of Sderot hiding beneath their cars with their children during rocket barrages, and jumping through the windows of buses bound for the relative safety of Beersheba - as if missing the bus would mean certain death - and then the eerie silence as a town is Israel is abandoned are impossible to abide. So too, the foreseeable prospect that these images will soon plague Ashkelon and Kiryat Gat bespeak an unbearable future.

But these are small potatoes when compared to the danger of national annihilation approaching us from Iran's nuclear installations.

While Olmert hunkers down in his office and alternatively wrecks our relations with the US; dispenses empty promises to secure the South and rebuild the North; blames everyone and anyone for his personal failures; and speaks of "the peace process" as Palestinian society self-destructs, Iran is sprinting to the doorway of the Nuclear Club. And with the government of Israel in the hands of knaves, no one is placing obstacles in Iran's path as it acquires the means to annihilate the Jewish state.

As the Times reported, when UN nuclear inspectors visited the Natanz nuclear facility on Sunday, they saw 1,300 centrifuges buzzing along, producing nuclear fuel. Another 300 are poised to begin operating next week and another 300 centrifuges are now under construction. The diplomatic source who spoke to the Times said that if it maintains its current pace, Iran will be operating 3,000 centrifuges by next month and 8,000 by the end of the year. With just 3,000 centrifuges in operation, Iran will be capable of enriching sufficient bomb-grade uranium to produce one atomic bomb per year.

Daily, the Iranians and their Hizbullah and Palestinian proxies threaten that if Iran's nuclear installations are attacked, they will retaliate by attacking Israel with tens of thousands of rockets and missiles. There is no doubt that this threat should be taken seriously.

Olmert tells us that we have nothing to worry about because the Americans will deal with the Iranians for us. But the US's actual policies towards the ayatollahs tell a different tale. This week, the Americans reacted with indifference to Iran's swift nuclear progress. R. Nicholas Burns, the Undersecretary of State for Policy who directs US policy towards Iran, told the Times that the newest revelations from Natanz will not affect American policy.

"We're proceeding under the assumption that there is still time for diplomacy to work," Burns said, adding that if the Iranians maintain their refusal to suspend their uranium enrichment activities, "We will move ahead toward a third set of sanctions."

And while Burns declared the US's resolve to impose a third set of sanctions on Iran after the first two failed completely to affect Iran's behavior, on Wednesday, the State Department announced that it would begin direct negotiations with the Iranians on May 28.

The only voices in Washington these days calling for military action against Iran's nuclear facilities belong to people, like former US Ambassador to the UN John Bolton, who were forced from their positions after the Democratic victory in last November's Congressional elections.

And this brings us back to Israel - and to the prime minister who is unfit for his position but uses his stunning political acumen to cling to office. Two weeks after the Winograd Committee's report, and 10 months after the last war, it is clear that Olmert will take neither his own incompetence nor the public's rejection of his leadership into consideration.

Rather than go home, he will pick a fight with Livni over how best to divide Jerusalem or surrender Hebron, or with Mazuz over his right to give millions of shekels of government subsidies to industrialists who are represented by his former law partner.

Given this most disturbing reality, one must conclude that public and political pressure for Olmert to resign is futile. He doesn't care.

Rather than direct our attention at Olmert, Israelis must turn our attention to his enablers. Yisrael Beiteinu head and Minister of Non-Existent Strategy Avigdor Lieberman and his buddy, Shas leader and Deputy Prime Minister and Minister of Something or Other Eli Yishai, as well as Shas's religious leader Rabbi Ovadia Yosef should become the objects of public pressure. They must be made to understand that if they desire a political future of any kind, they must abandon Olmert and allow the nation to elect a new government.

The enormous gap between the threats that Israel faces and the agenda of the Israeli government has become a threat to our national security. The only way to turn the tide is to hold new elections.