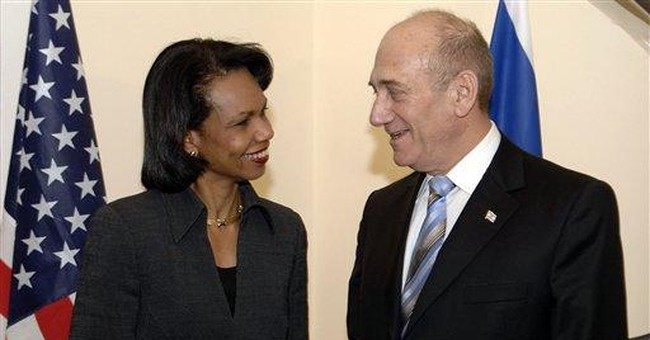 In an open act of war, Iran Friday kidnapped 15 British soldiers in the Persian Gulf. Iran's act of aggression occurred just as the British voted in favor of a UN Security Council resolution imposing increased sanctions against Teheran for its illicit nuclear weapons program.

Several theories have been raised to explain Iran's behavior. Some say that the Iranians acted against the British in the hope that Britain would respond by abandoning its alliance with the US and swiftly pulling its forces out of Iraq.

Another theory is that in kidnapping the sailors the Iranians are seeking to reenact their ploy from last summer. Then, Iran ordered its Lebanese proxy Hizbullah to kidnap IDF soldiers in order to divert the international community's attention away from Iran's nuclear program. As is the case with the British servicemen, so last summer's attack on the IDF took place as the Security Council was expected to convene and discuss sanctions against Iran for its pursuit of nuclear weapons.

Yet another theory has it that Iran kidnapped the sailors to use as a bargaining chip to force the US military to release Iranian operatives who the US has arrested in Iraq in recent months.

Whatever the case may be, it is absolutely clear that the Iranians intentionally fomented this international crisis with the expectation that their aggression would in some way be rewarded.

AGAINST THIS backdrop, and given the stakes involved, it could have been expected that the US and its allies would be concentrating their attention on how to weaken Iran and its terror proxies and curtail Iran's ability to acquire a nuclear arsenal. But, alas, the US is doing just the opposite.

The Iranians acted as US Secretary of State Condoleezza Rice was en route to the region. Since Friday, Rice has shuttled between Egypt, Israel, the Palestinian Authority and Jordan, and is on her way to Saudi Arabia. She is not working to coordinate moves to check Iran's increasing bellicosity. Rather, Rice is laboring to empower Teheran's terrorist allies in Hamas, the Islamic Jihad and Fatah. This she does by promoting the so-called Arab peace plan, which demands that Israel agree to dangerous and strategically catastrophic concessions to the Palestinian terrorist government.

In behaving thus, Rice is walking in the well-worn footsteps of her predecessors. Indeed, it seems almost axiomatic that when the going gets tough for US administrations, administration officials get tough on Israel.

AFTER THE Republicans won control of the Congress in 1994, then president Bill Clinton was hard-pressed to advance his domestic agenda. And so Clinton - who had almost no interest in foreign policy in his opening years of office - turned his attention to Israel and the so-called peace process, in which Israel was expected to give land, arms and legitimacy to the PLO in exchange for terrorism.

Clinton's penchant for forcing Israeli concessions to the PLO in the name of peace became more pronounced as things became more difficult for him during his impeachment hearings in 1998. As the House of Representatives poised to vote on articles of impeachment, Clinton twisted then prime minister Binyamin Netanyahu's arm until he signed the Wye Plantation memorandum, in which Israel pledged to transfer wide swathes of Judea and Samaria to Yasser Arafat's terrorist government.

Clinton forced Netanyahu's hand in spite of the fact that, by 1998, it was clear that Arafat was actively enabling Hamas and Islamic Jihad to carry out terror attacks against Israel and indoctrinating Palestinian society to wage jihad for Israel's destruction.

But negotiating with Netanyahu was inconvenient. Netanyahu refused to implement the Wye agreement in light of Arafat's support for terrorism and forced Clinton to acknowledge that Arafat was doing nothing to combat terror. Unhappy with this state of affairs, Clinton set out to overthrow Netanyahu's government.

IN AN ACT of unmitigated contempt for Israeli democracy and electoral laws, Clinton sent his own election advisers James Carville, Stanley Greenberg and Robert Schrum to Israel to run Labor party leader Ehud Barak's campaign in the 1999 elections.

The culmination of Clinton's campaign was the failed Camp David summit in July 2000. There, and in subsequent desperate discussions with Arafat at Taba, Barak agreed to hand over the Temple Mount to Arafat in addition to Gaza, Judea, Samaria and a pile of money.

Israel paid dearly for Barak and Clinton's behavior. In the Palestinian jihad that followed Arafat's rejection of Barak and Clinton's plaintive offers, more than 1,000 Israelis were murdered - more than 70 percent of whom were civilians. Israel's international standing fell to all-time lows as global anti-Semitism rose to levels unseen since the Holocaust.

America too, paid dearly for Clinton's behavior. Rather than pay attention to the burgeoning terror nexus which had placed the US directly in its crosshairs - in 1993 at the World Trade Center; in 1996 at the Khobar Towers; in 1998 at the US embassies in Kenya and Tanzania; and in 2000 at the USS Cole - Clinton remained scope-locked on the so-called peace process.

Rather than acknowledge the existence and threat of the global jihad to US national security, Clinton pressured the global jihad's primary victim - Israel - into transferring its heartland and capital to the godfather of modern terrorism.

But while Israel and America bled, Clinton himself paid no price for his behavior. Rather than be blamed for the war he contributed so richly to enabling, Clinton is upheld as a hero at best, or at worst a tragic figure who devoted his presidency to the cause of peace.

Today, Rice's newfound mania for peacemaking comes when local conditions negate any possibility of peace. Just last month the Saudis promised the Palestinians a billion dollars and so paved the way for the Mecca accord, where the Iranian-sponsored Fatah terror group surrendered to the Iranian-sponsored Hamas terror group. In so acting, the Saudis brought about the formation of a Palestinian government openly committed to the use of terrorism as a tool to ensure Israel's destruction.

International conditions also ensure that Rice's peacemaking will fail to make peace. Regionally, Iran ups the ante daily against the US-led coalition in Iraq. Domestically, the Democratic-controlled Congress works daily to prevent the US from fighting its enemies. Globally, states as far-flung as Russia, China and Venezuela make deals with terror governments to check US power.

The program that Rice has come to the region to advance does not even have the benefit of a peaceful facade. The Palestinians make clear every single day that they do not and will not accept Israel's right to exist in any borders, and that they will not work to combat terrorism against Israel. The Arab League, and its member states, for their part, have repeatedly announced that they will brook no change in their "peace" plan which, if implemented will bring about Israel's rapid destruction.

In behaving as she does, Rice, like Clinton before her, is aided by a politically weak and strategically incompetent Israeli government that is willing to sacrifice Israel's long-term security for the benefit of prime-time photo opportunities with bigwig American leaders and Arab potentates.

Sunday, the Olmert-Livni-Peretz government has announced that it is open to negotiating on the basis of the Arab plan. As one government official told The Jerusalem Post, Israel will "not dismiss" the plan.

THIS IS Israel's position in spite of the fact that the Arab plan calls for Israel to surrender east, north and south Jerusalem, Judea and Samaria and the Golan Heights to Hamas and Syria and for Israel to permit four to five million hostile, foreign-born Arabs posing as Palestinian "refugees" to immigrate to its truncated territory. As the "peace" plan makes clear, all these suicidal Israeli moves must come before the Arab states will be willing to have "regular" (whatever that means) relations with the indefensible, overrun Jewish state.

Commenting on the government's position, the official explained, "We would not reject this out of hand."

It is not surprising that Prime Minister Ehud Olmert and Foreign Minister Tzipi Livni are behaving in this manner. After all, these are the same leaders who brought about Israel's defeat in Lebanon in last summer's war at the hands of Iran's Hizbullah proxy army. Last summer, Olmert followed Livni's lead in rejecting military victory as an option. Heeding Livni's unwise, defeatist counsel, Olmert postponed the essential ground offensive in south Lebanon until it was too late to make a difference and instead opted for a negotiated cease-fire.

As is the case with the Arab "peace" plan, the cease-fire Israel enthusiastically acceded to last summer was strategically disastrous for the country. UN Security Council Resolution 1701 places Israel on the same plane as the illegal Hizbullah terrorist organization; prevents Israel from taking steps to defend itself; does not require the safe return of IDF hostages Eldad Regev and Ehud Goldwasser; enables Hizbullah to rearm and reassert its control over south Lebanon; and lets Hizbullah's state sponsors Syria and Iran completely off the hook for their central role in Hizbullah's illegal war against the Jewish state.

Recent history shows that the US and Israel will both pay heavily for the opportunism of our weak political leaders. It can only be hoped that the Israeli and American people have learned enough from our experiences to demand that our leaders stop their reckless behavior before the price of their cowardice and perfidy become unbearable.