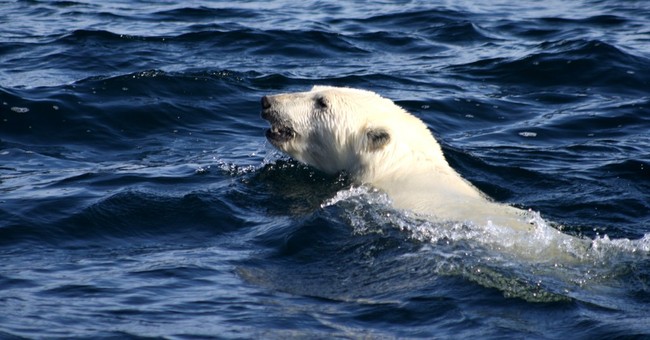 In the “The Great Climate Change Denial Industry,” University of Connecticut geology professor Robert Thorson sought to discredit all dissent about climate change by tying it (falsely in most cases) to funding from the fossil fuel industry—niftily adopting the logical fallacy of ad hominem circumstantial while ignoring the fact that advocates of global warming alarmism get hundreds of times as much funding from governments (with their own biases) and alternative-energy corporations, making them subject to the same critique (still fallacious, but sauce for the goose is sauce for the gander).

After sniping at religion (as if only fundamentalists are “climate skeptics”), bemoaning the decline in public fears of global warming but lacking the curiosity to ask whether there might be good reasons, and repeating the myth that polar bears are endangered, Thorson progressed to errors of fact and, well, more fallacious reasoning.

One: It’s real. Yes, as throughout earth’s history. But Thorson equivocates (fallacy). What he means by “climate change” is historically unprecedented and dangerous global warming driven primarily by human emission of carbon dioxide. Substitute that and “It’s real” becomes highly debatable—and is highly debated, even among climate scientists, like

The Medieval Warm Period was warmer than now, and at least two periods since 1850 but before CO2 rose enough to contribute significantly had as rapid and as long upward trends in global average temperature as the warming trend from about 1977 to 2000 that some attribute to higher CO2. So “modern warming” is not unprecedented.

Two: It’s us. Well, a tiny group of scientists (albeit some with impressive credentials in physics and thermodynamics) challenges the theory that CO2 warms the atmosphere by absorbing some outgoing infrared radiation and re-radiating some of it back toward the surface. But the vast majority of skeptics (and skepticism is a virtue in science) of dangerous anthropogenic global warming (DAGW) accept that it does. The crucial question is, “How much?”

Since 1988 the UN Intergovernmental Panel on Climate Change (IPCC) has said “climate sensitivity” (warming from doubled CO2 after all feedbacks) is 2–4.5°C with a best estimate of 3°C, until, last year, it reduced the lower end to 2.5°C and made no best estimate.

But because of “the pause”—the absence of observed global warming (contrary to the computer climate models) for the last 18 years and 2 months, or, to be more precise, 19 years at the surface and 16–26 in the lower troposphere, or, by another calculation published by a co-chairman of the IPCC, over 20 years—climatologists are reassessing climate sensitivity.

The result? Observationally based estimates have ranges like 0.3°C to 1.0°C, or 1.25°C to 3.0°C with a best estimate of 1.75°C. Thorson can follow developments about climate sensitivity at Curry’s blog.

Such findings lead more and more climate scientists from “It’s us” to “It’s partly us, mostly nature.”

Three: It’s bad. Questionable even with 3°C sensitivity, that’s nearly untenable with the lower estimates, particularly when considering not only negative but also positive effects of hydrocarbon fuels:

Four: Scientists agree—or, as Thorson expanded, “virtually all scientists have reached close consensus on these two issues of change and causation.” Forget that the claims of such consensus rest on faulty literature analyses and surveys; even that consensus was not spontaneous but contrived and so valueless even to describe scientists’ opinions; and over 31,000 scientists, including hundreds of climate scientists, explicitly reject that view. More important, Thorson has returned to logical fallacies: consensus gentium (majority vote) and ad verecundiam (appeal to authority). Votes and authority count in politics, not in science.

What Thorsen really wants is not science education that teaches students to test hypotheses by observation but politically correct propaganda in the classroom.

Five: There’s hope! Yes. As climate models diverge farther from observational data and consensus continues to collapse, the hyped-up case for wasting trillions fighting warming will fail, and the public will agree that we should, as over 150 scientists (including 21 climate scientists), economists, and religious leaders said in a recent declaration, protect the poor from impoverishing policies to curb global warming.