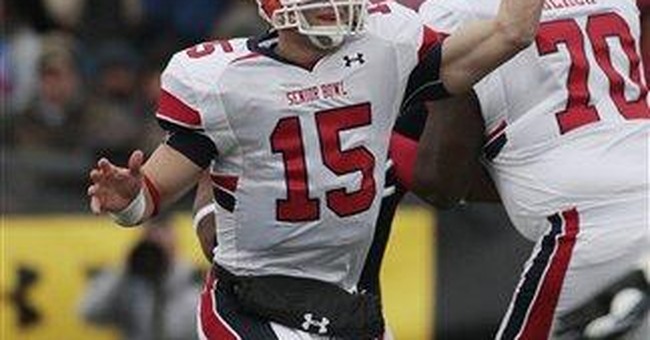 In the midst of the usual glut of Super Bowl commercials with messages about beer, cars and women with impossible bosoms, on Sunday there will be one 30-second message that has some people upset, even angry.

It is a message by 2007 Heisman Trophy winner Tim Tebow and his mother, Pam, who, after a difficult pregnancy, decided to give Tim a chance to live, though she was advised to have an abortion.

Self-styled "pro-choice" groups initially tried to get CBS to pull the ad, but when the network demonstrated a characteristic not often seen in the face of such lobbying -- courage -- the pro-choicers apparently realized their attempt at censorship wasn't going anywhere and so they are trying a different tactic.

In an opinion column for last Sunday's Washington Post, Frances Kissling, former president of Catholics for Choice and Kate Michelman, former president of Naral Pro-Choice America, portrayed Pam Tebow's choice to give birth to Tim as having no greater moral significance than if she had chosen to abort him. About the uplifting message in the scheduled Super Bowl commercial, they wrote: "People want to be inspired, and abortion is as tough and courageous a decision as is the decision to continue a pregnancy."

No it isn't. Toughness and courage produce a decision like the one made by Pam Tebow. She didn't know if her son would turn out to be "normal," much less a football champion honored by college football's highest award. The "easier" course would have been to accept the doctor's advice and rid herself of a potential "problem" and the "burden" a less than perfect child might have brought to the family.

The word "choice" presumes more than one option. In an age when government requires increasing amounts of information about food additives, automobile mileage, carbon emissions, and children's toys, too many women are still in the dark when it comes to information about the superior value of making a choice other than abortion.

Even Kissling and Michelman acknowledge that public opinion is shifting on abortion, from a decidedly pro-choice to a pro-life majority. Increasing the amount of information available, including sophisticated sonograms, which allow pregnant women to see what is growing within them as human and not impersonal tissue, is mostly responsible for this shift. So, too, is the realization that the disposal of more than 50 million Americans who might have been somebody has corroded us as a nation and diminished our collective humanity.

For 30 years I have spoken at pregnancy center fund-raising events and other pro-life organizations. I have listened to the stories of women who have felt pressured by parents, boyfriends, or husbands to have an abortion. Many did not want to have one, but believed there was no other option. There are and always have been other options, but only in recent years has the pro-life message been able to circumvent the media wall that has largely kept it from those who need and want to hear it.

Somewhere in the massive TV audience on Sunday will be a man, or a pregnant woman, who will hear Pam and Tim Tebow's message about the good that can happen if individuals don't try to play God. If that message causes just one woman who thought she needed an abortion to change her mind, or one man who has been pressuring his girlfriend, wife or daughter to get one to change his mind, it will have been worth the $2.5 million the ad is costing Focus on the Family.

Why? Because -- to paraphrase a credit card commercial -- human life is priceless.