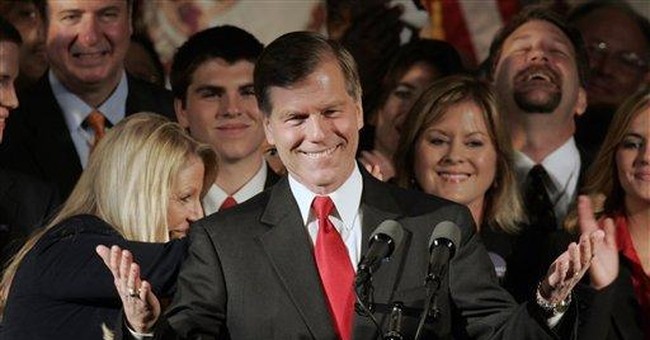 Richmond, VA -- Virginia's governor-elect, Bob McDonnell, may be the future of the Republican Party, if he can translate his substantial electoral victory into policy victories following his Jan. 16, 2010 inauguration as the state's first GOP governor in eight years. McDonnell's quiet demeanor is the polar opposite of the tub-thumping, angry conservative that has characterized much of Republican politics for more than 30 years, but he possesses solid convictions on matters of policy.

In a recent interview at his transition office, McDonnell, who crushed his opponent Creigh Deeds by a 59 percent to 41 percent majority, attracting sought-after independents by a 2-1 margin, said that while he emphasized bread-and-butter issues like jobs, transportation and taxes during the campaign he hasn't forgotten social issues that are near and dear to the Republican base: "I am a social and economic conservative and have made no bones about it. I have an 18-year record as attorney general and as a legislator of not only supporting, but leading on a lot of those issues ... but what I understood people were most concerned about ... were quality of life and pocketbook issues: jobs, economic development, taxes and federal intrusion into the free enterprise system."

Other Republicans have used social issues to win elections only to discard them once in office. Will McDonnell remain committed to these issues? "Absolutely," he says, mentioning his leadership, as a member of the General Assembly, on pro-life issues, including parental consent, informed consent and bans on partial-birth abortion, "which means no funding of Planned Parenthood when it comes to those kinds of services." He praises President Obama for emphasizing the responsibilities of fatherhood and in this he is "Reaganesque," preferring to focus on accomplishing goals that benefit the most people rather than indulge in ideological high-fiving that might make fellow conservatives feel good, but does little to advance a conservative agenda.

"The last thing (people) need is politicians butting heads and saying how bad the other guy is." Now if Democrats would only adopt that attitude. The Washington Post, which McDonnell calls "my friend," had 44 stories and blogs attacking him in a two-week period. It is now publishing articles casting doubt on whether he can achieve his economic aspirations. What does he make of that newspaper's inability to influence the outcome of the election?

"It shows that Virginia is still a right-of-center state," he says. McDonnell notes he won substantially in large pockets of Northern Virginia, the Post's backyard, which had been trending Democratic. He maintains the newspaper actually did him a favor: "The Post, along with my opponent, created such a misplaced focus on my position on social issues that they ceded the entire playing field to me on economic issues, which is what people were voting on."

Message: If you have a good platform that can improve the economy and promote job creation, Independents will give you a pass on your social agenda. That is a reversal of traditional Republican thinking of putting social issues front and center. "I try to (attract Independents) by reaching out and embracing people, not having a covenant of limitations that excludes people."

So is McDonnell a "big tent Republican"? It is a phrase that has come to mean the acceptance of anyone, even if they have positions that do not fit the Republican mold. "I do believe it is absolutely critical for the Republican Party to have a core set of principles that everyone can embrace ... to create public policy. What I am concerned about are these acid tests where if you fail on one or two, you are ostracized from the party. That leads to infighting, destruction and losses at the polls." He seems uncomfortable with a "purity pledge" that proponents plan to submit at the Republican National Committee's meeting in Hawaii next month.

A practicing Catholic, McDonnell reads his Bible, several newspapers and Websites daily for "inspiration and information." "Where my faith helps me immensely is that there is a style of governing that, for me as a Christian, means dialogue, civility, politeness, a spirit of cooperation and goodwill and trying to find ways to work together, while never capitulating on my principles."

That is an extreme makeover from the angry Republican and it might be a winning model for the GOP in 2010 and beyond.