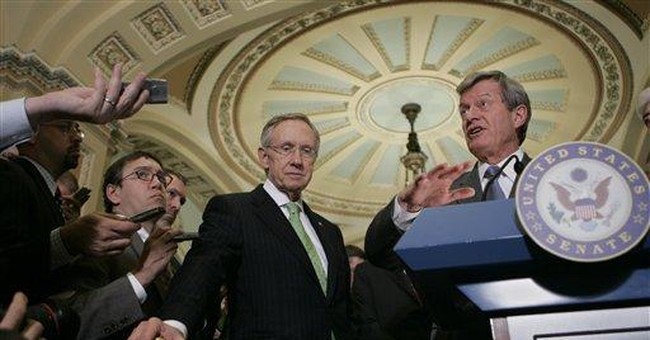 Does anyone in Washington tell the truth? Why should Senate Majority Leader Harry Reid be believed when he promises states can "opt-out" of a public option on health care? This isn't like opting-out of sex education class. Individuals won't be able to avoid the consequences of national health care once the government puts the insurance companies out of business, because there will be no other choice than the government program.

With health insurance "reform," opting-out, is really opting-in for eventual single-payer national health insurance that will include rationing -- especially for seniors, who will be told by government what treatment they are allowed -- higher taxes, longer waits and substandard care.

Several Democrats have been honest about where this is headed. They deserve thanks from the public for exposing the lies their party leaders are telling us. Speaker Nancy Pelosi's cover-up now includes word games. She thinks the public option should be renamed "the consumer option." There will be no option for consumers when government undercuts insurance companies, which have fast become Democrats' Halloween ogres.

Don't take it from me. Consider Sen. Evan Bayh, Indiana Democrat: "If it was a public option that was just kind of a stalking horse for a government-run health care system, I don't think that would have a very good chance." Kudos to Sen. Blanche Lincoln, Arkansas Democrat, for saying, "For some in my caucus, when they talk about a public option, they're talking about another entitlement program and we can't afford that right now as a nation."

Imagine that! A Democrat saying we are spending too much as Congress prepares to raise the debt limit to $12 trillion. The deficit is currently at $1.6 trillion.

Sen. Kent Conrad, North Dakota Democrat, called the push for the public option "a wasted effort" because the votes aren't there. Sen. Byron Dorgan, also a North Dakota Democrat, agrees: "I've indicated I won't vote for a bill that's a government takeover of health insurance, or the health care system." And then there's Sen. Joe Lieberman, former Democrat and current Independent, who has vowed to join Republicans in a filibuster of any plan that contains a government option.

There is no secret what will fix the problems with health insurance, but liberal Democrats don't want to fix it, as much as they wish to control it and all of us.

The CATO Institute remains a primary resource for ideas that will work in reforming health insurance. It recommends four steps Congress could take and the public should demand. (1) give Medicare enrollees a voucher and let them choose any health plan on the market that fits their needs, not what the government dictates. Vouchers would be means-tested, would include Medicare spending and are, says CATO, the only way to protect seniors from rationing. (2) Congress should reform the tax treatment by allowing large health savings accounts. This would reduce the number of uninsured Americans, would free workers to buy secure health coverage from any source, and would effectively give workers a $9.7 trillion tax cut without increasing the deficit; (3) Congress should breakup state monopolies on insurance and clinician licensing. CATO estimates allowing people to buy insurance from other states could cover one-third of the uninsured without new taxes or government subsidies.

(4) Congress should reform Medicaid and the State Children's health Insurance Program (S-CHIP) the way it reformed it in 1996 when it block-granted the programs. This would help reduce the deficit and encourage states to target resources to those most in need.

These free market ideas and others like them are a rebuke to the lie by some liberal Democrats that Republicans and conservatives have presented no plan of their own for health insurance reform. They have, but those holding power don't want to hear them. That's because they have their own agenda. The only way they can be stopped is by a public outcry and uprising. Not only our health, but also our lives depend on stopping them.