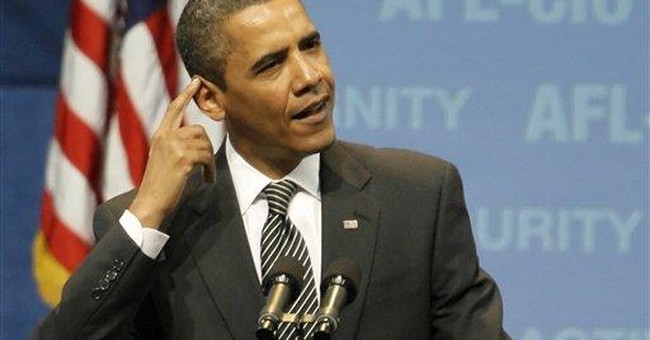 When Barack Obama was elected president of the United States, some suggested that race played a factor in his success. People "wanted" to elect a black man president because of our history of slavery and the denial of civil rights for so many years to African-Americans. It is never "racism" to vote for someone because he is black. It is only racism to oppose the policies of a black Democrat.

As the president's approval ratings fall and rise and fall again, some of his supporters in journalism and politics are returning to days of old when the label "racist" could end any discussion and force the accused either into stunned silence, or groveling repentance. I suspect the tactic won't work this time because Obama supporters will have difficulty explaining how a mostly white country could elect a black man president last November and ten months later become a racist majority.

Racism has always been a one-way street for the Left. When Clarence Thomas was nominated to the Supreme Court, some liberals called him a "handkerchief head negro" and an "Uncle Tom." According to liberal doctrine, black people can never be racist because they are members of a victim class created by white liberals as a kind of modern plantation to keep blacks voting for liberal Democrats.

Former Secretary of State Condoleezza Rice, African-American like President Obama, grew up in Birmingham, Ala., at the time of the 16th Street Baptist Church bombing by members of the Ku Klux Klan, which killed some of her friends. She has more "street cred" than others who claim to have it, but she got no points from liberal Democrats when she ascended the ladder of power and influence. It was the same with Colin Powell. The Left strongly criticized Powell for adding credibility to the claim that Saddam Hussein possessed weapons of mass destruction thereby winning U.N. approval to use force, if necessary, against the Iraqi dictator. Were those who opposed Powell racist? Using the formulation now being applied to President Obama that opposition to any of his policies -- from health care, to record amounts of debt -- constitutes racism, they were.

The polar opposite case could be made that, despite his race, President Obama is being treated just like any other politician, which proves he's being treated equally. He is getting the same heat every president gets, sooner or later. The president's race would be a factor only if Americans shied away from criticizing him because of it. That they are not is a triumph of Martin Luther King Jr.'s hope that people be judged by the content of their character, not the color of their skin. Some opinion polls show that Obama's character is being judged and found wanting by a rapidly growing number of Americans, at least a small percentage of whom are black.

With Democrats controlling all three branches of government, including significantly wide margins in Congress, isn't there a better explanation than racism for why the president is having difficulty with some of his proposals? If racism is the cause of his difficulties, there must be many congressional Democrats who are racists, because they have the power to enact the president's agenda, but some are reluctant to do so.

The Pew Research Center has noted a 10 percent drop in Obama's approval ratings, which includes a 3 percent decline among blacks. As black conservative columnist Star Parker has written, "If we assume this reflects the 16 million blacks who voted for Obama last November, a three-point shift means there are about a half-million blacks who now have buyer's remorse." Are these black Obama voters racist?

There is a better explanation for the growing opposition to President Obama. It has less to do with his ethnicity than it does his credibility. Character, after all, is colorless.