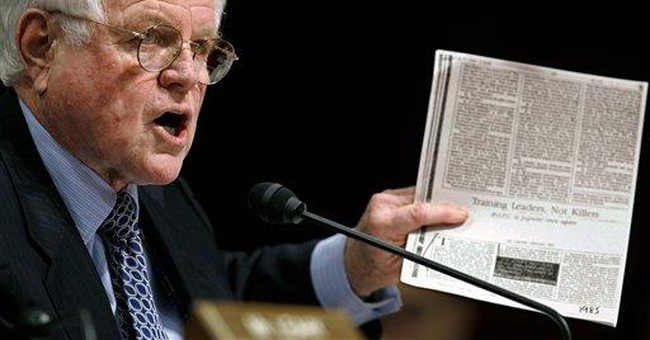 Most of my adult life has been intertwined with the Kennedy family. As a freshman at American University in 1960, I stayed up late watching the election returns, as John F. Kennedy barely eked out a victory over Richard Nixon. As with most Americans my age, the decades that followed always involved one or more members of the Kennedy family, whether it was legislation, indiscretions, speeches or just curiosity.

This larger-than-life family has been unique in American politics. But so were the friendships Ted established across the political lines that so easily divide us. He used those personal relationships to accomplish things that mattered to him. Many on the Right hated and demonized him, but I don't ever recall his responding in kind.

These days, people on "one side" of the political spectrum are not supposed to cooperate, much less have a personal relationship with anyone on the "other side." Siding with "the enemy" can get you branded a compromiser, a sellout, or worse a fool. While it is true that on too many occasions, conservatives have had their ideological pockets picked by liberals whose favor they curried, that is no excuse for hating people because of their political beliefs.

Kennedy once said in a speech: "I am an American and a Catholic; I love my country and treasure my faith. But I do not assume that my conception of patriotism or policy is invariably correct, or that my convictions about religion should command any greater respect than any other faith in this pluralistic society."

What student or advocate of the First Amendment would disagree with that?

Flaws? Of course he had them in abundance, as we all do, but his, unfortunately, played out on a national and international stage. How would you like to have lived with the daily pressure of knowing that somewhere out there someone may have wanted to kill you as they had your brothers?

I recall a dinner at Ted's home when he lived in McLean, Va. His sister, the late Eunice Kennedy Shriver, was my dinner partner. He was gracious and funny. He took my wife and me on a tour of a hallway with memorabilia that would delight any political junkie. Five years ago, he showed up at a 20th anniversary party for my syndicated column. When he entered, every head turned in his direction, every jaw dropped. No one could believe that this liberal icon would so honor a conservative friend.

Over the years, I came to see Sen. Kennedy not as a symbol, but as a fellow human being who did not get up each morning seeking ways to harm the country. I know of things he did for the poor and homeless on his own time and in his own way without a press release or a desire for public approval. I know of other hurts and concerns he shared with the very few he could trust about which I would never speak.

Because he came from wealth, he felt a responsibility to give back. We can argue whether government or individuals do that best, but we can't say that Ted Kennedy was inconsistent. He would compromise to advance his beliefs, not dilute them.

Ted once provided a blurb for a book I wrote. He said, "Cal Thomas usually says the far-right thing instead of the right thing, but I like reading him anyway."

With the passing of the last of Joseph P. Kennedy Sr.'s sons goes the image of youth and "vigah," as Jack used to say in his Boston accent. I shall miss Ted Kennedy, not only because he was a worthy ideological rival, but also because with his passing, a part of my youth has gone with him.

Camelot, of course, was a myth, but what young person of that era cannot still hear the line uttered by Richard Burton from that lauded musical? It came at the end of the show as King Arthur surveys his broken kingdom and tells a young man of Camelot what might have been:

"Don't let it be forgot.

That once there was a spot

For one brief shining moment that was known as Camelot."