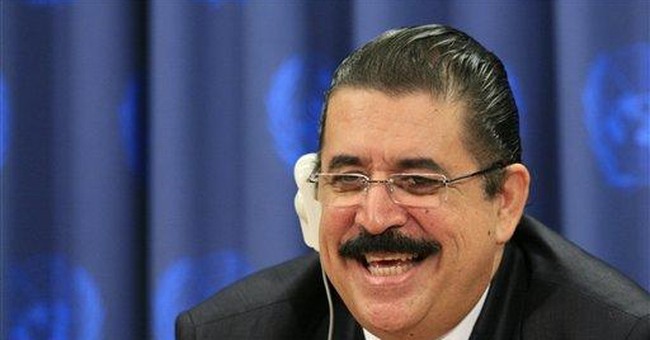 Help me out here. President Obama immediately "meddles" in the affairs of Honduras, denouncing a military coup, the intent of which is to preserve the country's constitution, but when it comes to Iran's fraudulent election and the violent repression of demonstrators who wanted their votes counted, the president initially vacillates and equivocates. Are we expected to accept this as a consistent foreign policy? Even Secretary of State Hillary Clinton was reluctant to call the removal of President Manuel Zelaya a coup, if for no other reason than it would stop U.S. aid flowing to the impoverished Central American nation.

The fingerprints (or in this case the boot prints) of the Castro brothers, Venezuela's dictator Hugo Chavez and Daniel Ortega of Nicaragua are all over this. If one is known by the company one keeps, the specter of the Castros and their protege dictators joining President Obama in denouncing the Honduran military coup is not reassuring. Clearly Zelaya was the choice of the dictators to help spread "revolution" to America's back door. The coup is a setback for them, though perhaps temporary, depending on how much pressure "world opinion," which can be as fickle as some politicians' marriage vows, can assert.

One of the flaws in U.S. policy in this and in the Bush administration has been our commitment to elections as an end and not a means. Elections can put scoundrels in power and the election that elevates them is often the last one a country sees until the miscreants are overthrown. That has been true of Hamas in the Palestinian legislative elections of 2006, Germany under Hitler, as well as Ortega and Chavez, among others. The United States should be supporting electoral processes that put people in office who are committed to the rule of law and representative government.

The threat by Chavez to send his troops into Honduras ought to be another signal to the Obama administration that thugs can't be made nice by talking to them. So far, the world's tyrants have been unresponsive to Obama's offer of a new start and a pushing of the "reset" button, which Secretary Clinton famously offered Russia's Foreign Minister Sergei Lavrov. The word on the device she gave Lavrov was meant to say "reset" in Russian, instead, roughly translated, the word meant "overcharge." Overly optimistic might be a better word to describe this nascent administration's approach to bad guys. They are getting the message, but it's a different one than President Obama hoped to send. The message is that Obama is weak and can be had.

It is one thing for a president to be liked, but in a dangerous world with dictators who have, or wish to acquire, nuclear weapons and by these and other means destroy the United States, it is better that an American president be feared.

Does this administration have a "Plan B" for dealing with thugs and dictators should their rules of social and diplomatic etiquette fail to produce their announced objectives? Suppose Kim Jong-il follows through on his threat to launch a missile at Hawaii on July 4? If he does and America shoots it down, what happens then? If missile defense fails (the administration and Congress are cutting the budget for a missile shield) and the missile hits Hawaii and kills a lot of people, what then?

Will there be strong denunciations, UN resolutions, or a rapid and devastating retaliation? Given this administration's commitment to "dialogue," I'm not betting on retaliation. More like handwringing and wondering aloud what we might have done to make them hate us, as we heard from many leftists following Sept. 11.

The administration is being tested on several fronts, as Vice President Biden predicted. Honduras is one of many challenges. Will the administration meet them, or retreat? We may know sooner than many of us might expect.