The Voice Claims Another Victim 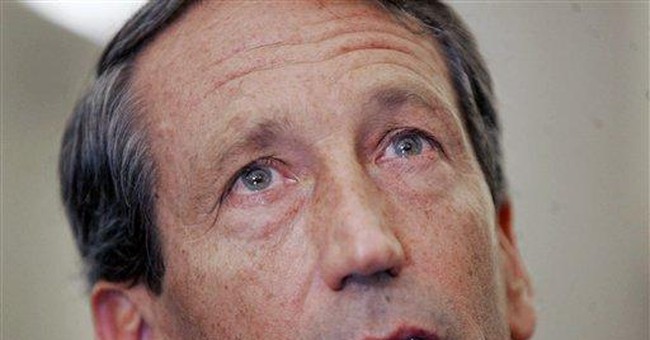 The first thing that should be acknowledged about South Carolina Governor Mark Sanford's admission to an extramarital affair is that it could happen to any of us. That is not an excuse (and no, it has not happened to me, or to my wife). Every married person has heard the voice; the one that says you deserve something "better."

Gov. Sanford should have been familiar with the voice because of the Bible studies he attended. The voice began seducing humanity a long time ago. It told our first parents that they needed more than the perfection of Eden. The voice told them that God knew that if they ate of the tree of knowledge of good and evil they would be like God. But they already were like God, because they were made in His image.

Stick with me you secularists and non-literalists, because there is a point to be made for you, too.

Psychiatrists explain that married people tire of one another after 10 or 20 years (it used to be seven years, as in that Marilyn Monroe/Tom Ewell film "The Seven Year Itch." Must be inflation.). Good marriages are the result of hard work. Forsaking all others is more than a wedding promise. It is a daily denial of one's lower instincts. Temptation is everywhere. The key to overcoming it is to realize you are fighting an adversarial force that wants to destroy you, embarrass you and cause ridicule to be heaped on the God you claim to worship.

One can make excuses about power and loneliness and starting out as a friendship that develops into something else, as Gov. Sanford rambled on about, but one can't explain adultery. It is what it is and the person who commits it should be calling on God for mercy, not the voters for understanding.

I once asked evangelist Billy Graham if he experienced temptations of the flesh when he was young. He said, "of course." How did he deal with them? With passion he responded, "I asked God to strike me dead before He ever allowed me to dishonor Him in that way." That is the kind of seriousness one needs to overcome the temptations of a corrupt culture in which shameful behavior is too often paraded in the streets.

There was a time when a divorce would disqualify someone from public office. Now people admit affairs and expect to stay in office. "It's just sex," said defenders of Bill Clinton. One might as well say, "it was just a gun" that killed my spouse. Adultery wounds in ways a bullet cannot. One can potentially heal from a bullet wound, but a shot to the soul and to the trust that must be central to any marriage is nearly impossible to repair. The wounded spouse always wonders, "Will he/she do it again?"

A relationship most promise to venerate "until death us do part" is damaged by adultery, whether it's a TV evangelist, a politician or a regular Joe who violates the marriage bed. In fact, we rarely even use the word "adultery" anymore because it sounds so, uh, biblical, and those teachings and commands long ago fell out of fashion, though they work for those who embrace them.

Any man who claims never to have had thoughts of straying is a liar. Any man who has sought the help of God and other men in helping him to honor his marriage promises to his wife and children is a hero, especially in today's morally exhausted culture.

I miss Paul Harvey and his acknowledgement of those who had been married 50, 60, even 70 years. Those people are my role models. I'm sure they heard the voice, too, but they told it to get lost and it did. Pushing against weights builds up the body, pushing against the voice builds up the soul and improves a marriage. You can never take a marriage -- or the voice -- for granted; it's always on the prowl looking for new people to destroy.