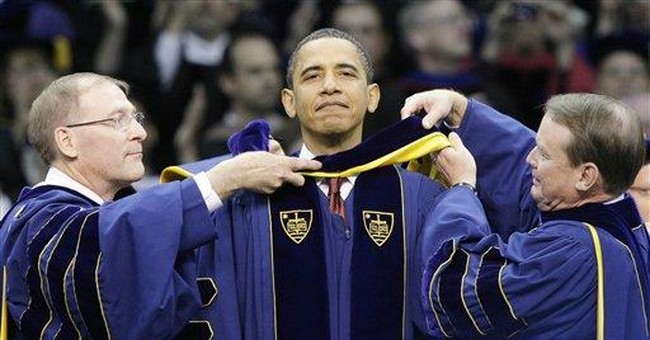 Put aside the question of whether a distinctly Catholic institution like Notre Dame should award an honorary degree to a man who stands against any restrictions on abortion; put aside the notion of academic freedom, which liberals favor as an intellectual premise, but rarely practice when it comes to conservative speakers, whom you very rarely see standing at the lectern at commencement ceremonies anywhere in the United States this time of year.

Focus, instead, on President Obama's remarks and whether he is serious, or can be made so, about actually reducing the number of abortions in America, which, according to the National Right to Life Committee, has reached 50 million since its legalization in 1973. Don't put aside, however, the argument that there is only one reason to even want to reduce the number of abortions and that is that what is being killed, terminated, evacuated (choose your term) is, in fact, human life.

At Notre Dame, the president gave an eloquent and well-crafted speech, full of Christian rhetoric and self-deprecating humor. He made a strong case for civility in the abortion debate, but curiously noted that the advance in civil rights legislation came only after confrontation, some of which turned violent. Without that confrontation, he seemed to suggest, there might not be laws that liberated blacks and made it possible for him to become president.

In speaking of "original sin," the president hit upon why abortion has been so easily tolerated for so long. He spoke of "self-interest" and "crass materialism," but he did so in the context of economics, not abortion. Possibly without meaning to, he correctly diagnosed the underlying rationale that has caused so many to willingly, sometimes casually, snuff out another life.

The president listed these goals, "Let us work together to reduce the number of women seeking abortions; let's reduce unintended pregnancies." (Watch for this to include a new push for contraceptives and the kind of sex education in schools that has failed to reduce and some believe encourages sexual activity.) "Let's make adoption more available. Let's provide care and support for women who do carry their children to term."

As the president referred to scripture and skillfully engaged in religious rhetoric, he might consider this verse: "By their fruits you shall know them." (Matthew 7:16).

The thousands of pregnancy centers in America today, which offer material and spiritual help to women, did not exist at the time of Roe v. Wade. Will the president raise their visibility and encourage women to seek their help? Will he encourage women who don't want their babies to carry them to term so that others can adopt them? Fewer American women are giving their babies up for adoption. There are approximately 1.2 million abortions each year in the United States and at least that many people/couples waiting to adopt. I conclude that abortion has contributed to the lack of available infants for those wishing to adopt them, which is one reason many couples adopt overseas.

There is heartening news for pro-lifers as evidence has emerged of a slight cultural shift. For the first time since the Gallup organization began measuring opinion on the subject, more Americans self-identify as "pro-life" (51 percent) than "pro-choice" (42 percent). Moreover, Gallup found that momentum is now on the side of pro-lifers. Just one year ago, those self-identifying as pro-life stood at 44 percent and those who were pro-choice at 50 percent. That is a dramatic reversal. In part, it is because of the tireless efforts by pro-lifers through pregnancy help centers, sonograms, testimonies of women who regret having had an abortion and TV commercials. It is also because a new generation has rejected the old arguments about coat hangers and back alleys. Younger people are taking a fresh look at the issue and embracing the moral argument that all human life is sacred, whatever its status.

Politicians are sensing this, which is why Obama is trying to have it both ways and possibly further divide the Catholic vote. But at least he is giving credibility to the moral argument, unlike most of his pro-choice peers. His speech was an appeal for discussion and respect for people with different views. That's a good beginning, but the ending is what counts and the initial actions of this president when it comes to abortion and stem cell research have not been pro-life.

Let's see if he can produce some fruit from what has so far been a dead stump.