Reaching Across the Aisle 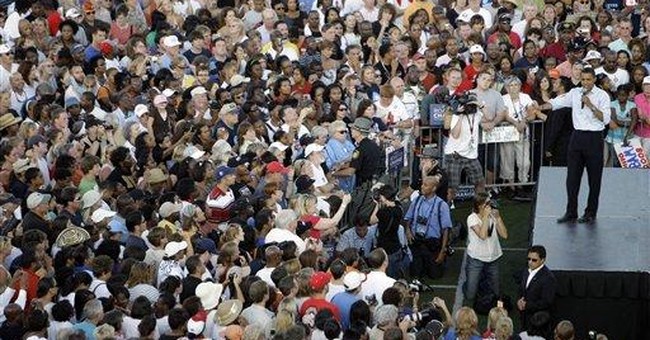 Why do Republicans constantly talk about compromise and bipartisanship when Democrats almost never do and when they do, don't mean it? Democrats rarely compromise when they are in the majority.

While John McCain promised those gathered at the Republican National Convention in St. Paul that he would "reach across the aisle" and put Democrats and Independents in a McCain administration, Democrats are busy sending out fund-raising letters asking for donations so they can win a "gridlock-proof Senate majority" and won't have to compromise with Republicans.

Where are principles in this? Why aren't conservatives arguing in favor of the superiority of their ideas rather than attempting to win "Miss Congeniality" awards from liberals?

Republicans who practice politics of conciliation too often get their heads handed to them. Recall President George H.W. Bush who reached out to then-Speaker of the House Jim Wright at Bush's Inauguration in 1989, promising unity, harmony and compromise. Wright's smile revealed he knew that Bush could be had and that Mr. "Read My Lips, No New Taxes" seemed more intent on keeping his promise to be a nice guy than he was in keeping his promise not to increase taxes. When Bush compromised with Democrats and signed-off on a tax hike, it doomed his re-election chances.

Bipartisanship should not be an end, but a means. Instead of talking about populating his administration with Democrats and Independents, John McCain should be listing the problems he intends to solve and the way he intends to solve them. Only then should he recruit Democrats and Independents who agree on the problems and his proposed resolutions.

A national telephone survey by Rasmussen Reports, posted Aug. 27, finds that just 9 percent of likely voters give Congress positive ratings, while 51 percent say it's doing a poor job. This is an issue McCain should embrace. Harry Truman made the Republican "do-nothing Congress" an effective campaign issue in 1948 and while lightning rarely strikes twice in politics, McCain might consider a similar tactic.

Rather than just pledge to invite Democrats and Independents to serve in his administration, he should promise to seek out those Democrats and Independents who agree with him on six big issues. Each one wouldn't have to agree on all six, but each could be placed in positions where he or she could work in concert with, instead of against, a McCain administration. Such a strategy could divide the more conservative Democrats from their liberal congressional leadership. Democrats managed to gain their congressional majority in 2006 by running more moderate and conservative candidates than liberals. If the new members of Congress want to keep their seats, they would support McCain on the important things.

Those six big issues should be (1) Defense/Terrorism (Sen. Joe Lieberman, who understands both would be a fine secretary of defense), (2) Immigration. Let's effectively seal the border, make English-speaking Americans of those who are here illegally and then get about the business of legally admitting more highly-skilled and educated immigrants who could do more than slap up wallboard and mow our lawns, (3) Education. We wouldn't need to import so many highly skilled workers if we produced more of them in America. School choice, which emphasizes the student instead of teachers' unions, is the place to start. Feature testimonies from the parents of poor minority students to shame Congress into "letting our people go" from failed monopolistic government schools, (4) Health insurance. Make it national instead of parochial. Why can you buy car insurance and it's good in any state, but health insurance is good only in the state in which you buy it? Competition would lower costs, making it available to more people, (5) Energy independence. Both parties know we need to be free of most foreign oil. Let's get a man-on-the-moon project going and do it, (6) Social Security and Medicare reform. McCain can start by using the 1997 Bill Clinton-Newt Gingrich agreement, which, according to U.S. News & World Report, was never implemented due to the Monica Lewinsky scandal.

I am sure McCain can find Democrats and Independents who believe in one, or more (or all) of these six big issues and can work alongside Republicans to solve them, instead of indulging in the constant bickering and political partisanship that does little to promote the general welfare, but promotes instead the welfare of partisans.