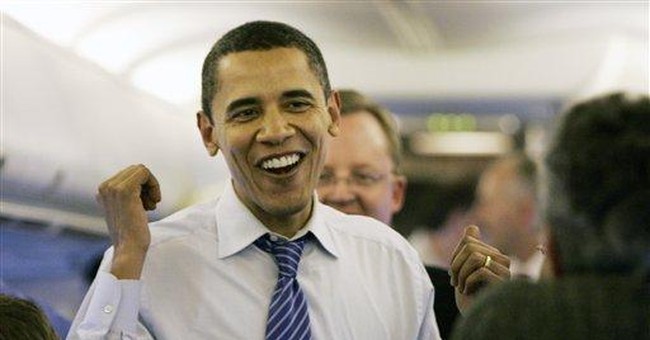 In human relationships, there is the flirtation stage, followed by what my grandparents called "courting" and, if that works out, marriage. For those who are co-habiting, that was once the order of things, before disorderly social conduct took over.

In presidential politics, the analogy also works. We have passed the flirtation stage with Barack Obama and now it is time for a serious background check before too many of us follow our hearts instead of our heads and enter into a bad "marriage."

That MoveOn.org and Sen. Edward Kennedy have endorsed Obama ought to be enough for any conservative - even moderate - to pause before heading toward the electoral altar. But Obama has offered more cause for alarm by heralding his left-wing economic philosophy in a recent interview with The New York Times.

Obama told the newspaper the top priority of the next president should be the creation of a more lasting and equitable prosperity than achieved under Presidents Bush and Clinton. Obama apparently missed the class that teaches government doesn't create prosperity; people do.

During last Thursday's debate with Hillary Clinton, Obama said he would pay for his proposed new programs, including mandatory health insurance, by imposing higher taxes on "the wealthy" and raising the tax on Social Security wages. He added, "What we have had right now is a situation where we've cut taxes for people who don't need them." Should government determine how much money people "need"? This is Marxism: "from each according to his ability; to each according to his need." Sen. Clinton expressed similar sentiments on ABC's "This Week" when she said if people refuse to buy health insurance under her plan she might garnish people's wages.

One reason this socialistic mind-set resonates favorably with many is due to the shift in the last half-century from promoting hard work, self-sufficiency, marriage, personal responsibility and accountability and living within one's means, to a mentality that I am entitled to the fruits of other people's labor. That used to be called robbery before government started doing it more than a century ago through the income tax.

Another reason the Obama (and Clinton) class envy works is that too many people are economic illiterates. They can't tell the difference between compound interest and a compound fracture. How many politicians today talk about looking out for one's self, not relying on government? Too many Republicans negotiate with Democrats over the size of new programs and budget increases, rather than reducing the cost and size of the nanny state. The era of big government is not over, as Bill Clinton proclaimed in his 1996 State of the Union address; it has just begun. If either Hillary Clinton or Barack Obama becomes president, government will grow even larger and become more intrusive.

Calvin Coolidge, who spoke when he had something to say, cautioned, "Never attempt to build up the weak by tearing down the strong." That is what Obama and his fellow Democrats seem intent on doing. They tear down the rich, rather than encourage the non-rich to become prosperous.

Obama should read the works of the Scottish moral philosopher, Adam Smith, who said, "It is the highest impertinence and presumption in kings and ministers to pretend to watch over the economy of private people, and to restrain their expense. They are themselves, always, and without any exception, the greatest spendthrifts in the society."

Again, Calvin Coolidge rebukes the ideology of Obama-Clinton: "The collection of any taxes which are not absolutely required, which do not beyond reasonable doubt contribute to the public welfare, is only a species of legalized larceny. Š The wise and correct course to follow in taxation is not to destroy those who have already secured success but to create conditions under which every one will have a better chance to be more successful."

Given such truths, it is time to break up with our Obama infatuation.