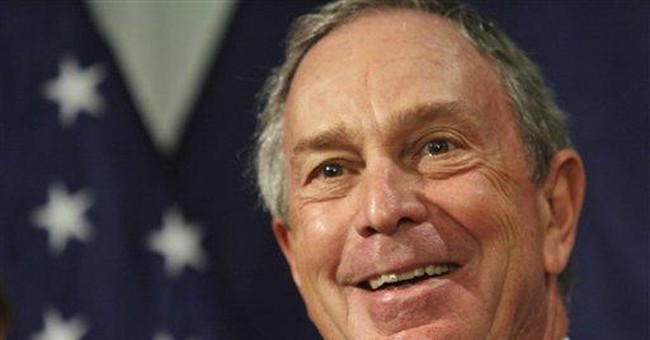 Let's have a show of hands by people who are fed up with the way politics is practiced in America. Activists, party operatives, media guest bookers interested in conflict, not resolution of problems and all fund-raisers, put your hands down. The rest of you pay attention.

On Jan. 7 in Oklahoma City comes what may be the best chance we've had in a long time to begin to end the polarization and partisanship that has gripped our political system for more than three decades, a political system that benefits a limited few and harms most of the rest of us.

New York Mayor Michael Bloomberg, a former Democrat and former Republican who is now a potential independent candidate for president, will also attend. There is speculation Bloomberg might use the gathering to launch his own candidacy on a fusion model, though he denies it. Boren told The Washington Post, "It is not a gathering to urge any one person to run for president or to say there necessarily ought to be an independent option. But if we don't see a refocusing of the campaign on a bipartisan approach, I would feel I would want to encourage an independent candidacy."

Cynics might view this gathering of moderate Republicans and Democrats as a Trojan horse for the Hillary Clinton campaign, though a Bloomberg candidacy might take votes from both party candidates. This would be different from when Ross Perot ran in 1992, taking votes away from President George H.W. Bush and handing the election to Bill Clinton who won with only 43 percent of the popular vote.

Still, let's accept this gathering as a sincere attempt to repair our broken politics, unless it proves otherwise. The stated purpose of the meeting is to "go beyond tokenism in building an administration that seeks national consensus" on important issues and problems facing the country. This would mean naming more than a single cabinet member from the opposing party. Any administration committed to consensus must go further, while selecting people who pledge not to undermine the president's policies.

How would such a bipartisan administration operate? As Democratic strategist Bob Beckel and I have written in our book, "Common Ground: How to Stop the Partisan War in America," the first step is to agree that a problem exists which government can fix. Most of the partisanship in Washington never reaches the first step. Each side impugns the motives of the other. Each side refuses to allow the other to succeed, fearing electoral benefits to the other party. This is a prescription for failure on all levels, foreign and domestic.

Our second recommended step is to take the best ideas for solving the problem from both sides without compromising the principles of either party. Take poverty. Bob and I agree there is a role for government and the private sector in helping the poor. We both like micro loans popularized by Nobel Peace Prize winner Muhammad Yunus and we agree that government can guarantee them. If the objective is to reduce poverty and encourage self-reliance, rather than to score ideological points that benefit a tiny few, people can use micro loans to start small businesses and emerge from poverty.

Other consensus positions can be reached on issues from abortion, to taxes and government spending, if the goals are first agreed upon and each side believes it is contributing to actual problem-solving instead of playing political games.

Most of the country practices compromise in their business, social and personal relationships and wonders why government can't do the same. It can if it is liberated from crass partisanship. While reserving the right to label Monday's meeting a sham if it proves to be so, I prefer to encourage the stated intentions of the conveners and participants, because a serious attempt to reach common ground is in the nation's best interests.