The Tragic Death of Benazir Bhutto 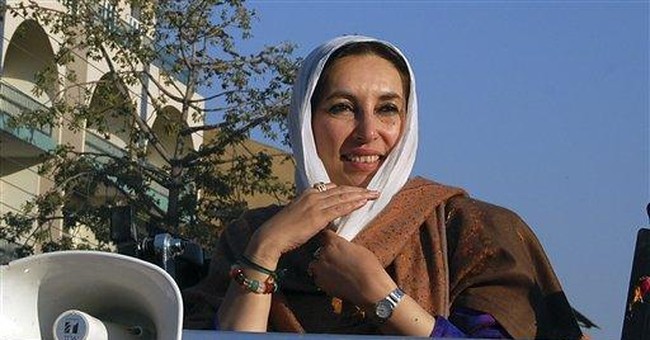 The assassination of former Pakistan Prime Minister Benazir Bhutto might have been prevented had she and her husband heeded advice from friends. Former U.S. Ambassador Curt Winsor told me he had recommended that Bhutto accept a team of retired U.S. Navy SEALs as her bodyguards. A similar team has effectively (so far) contributed to the protection of Afghanistan President Hamid Karzai. According to Winsor, Bhutto deferred to her husband, who declined the offer, believing her adoring crowds and local security would be sufficient. It was a tragic misjudgment.

Benazir Bhutto was a strong woman. Women who are strong in the things that matter most - courage and character - are a threat to weak men without such traits. Some men will go to any length to oppress such women, even invoking the "will of God" as the ultimate justification, when God wants to liberate women (and men), not subjugate them to self-righteous sinners.

The first thing most men - and many women - noticed about Bhutto was her striking beauty. At 54, her skin was flawless, and those dark eyes characteristic of people from her part of the world drew in all upon whom her gaze fell. The white head scarf added to her allure. In some ways, she reminded one of a younger Elizabeth Taylor. She could stop conversation and activity by entering a room. Like Taylor, Bhutto had more than political celebrity. She had star power.

The second of her many noble qualities, like beauty that truly matters, was more than skin deep. She had a way of moving between two worlds - East and West; Muslim and Christian - that also threatened fanatics whose mission in life was to kill, not build; and oppress, not liberate. She represented hope and a future separated from a culture that wants to drown people in the past, and this, too, was a threat to men with medieval minds. She was educated at Harvard and Oxford. To those indoctrinated in hate and fundamentalist religion, Bhutto was a threat to their ignorance, a pin light in a cave of intellectual darkness.

At the end of September she was in Washington for meetings with supporters and a few journalists. Sipping tea with her was an experience I shall never forget. She knew the risks of returning to Pakistan, but accepted them because, "I love my country and my people." That's something else we don't see much of today: patriots. There are many politicians who, for reasons of ego and a need to satisfy their own narcissism, seek power, but hide their hunger with bows toward more noble objectives. Like all politicians, indeed like all humanity, Bhutto was flawed, but she was less flawed and more principled than many others in her country. Women with a husband and children don't jeopardize comfortable and relatively safe lifestyles for what awaited her in Pakistan. True heroism is to know the risks and to take them in spite of danger.

There were the usual statements of condemnation by world leaders. They mean nothing to religious fanatics who kill others and themselves in the process as Bhutto's murderer did. Pakistan is in a fight for its life, and one wonders whether President Pervez Musharraf, having made bargains with some of the Taliban devils and warlords, will be able to fight the terrorists the way they must be fought in order for democracy to prevail. Pakistan will not prevail any other way.

What do Democratic candidates running for president offer as a policy for combating the terrorists? Just varying degrees of pullout, quitting and surrender in Iraq and no credible plan for defeating terrorists elsewhere. Bhutto is a threat to them, too. Her example of bravery is also a challenge to another woman, Hillary Clinton, whose true convictions are yet to be discovered.

Leadership is more than biology. It takes a well-crafted ideology and goals beyond one's self. Bhutto had them in abundance. While her death is a great personal loss to her family and to reformers in Pakistan, it is also a loss to the world, which suffers from too few patriots and too few leaders who put others before their own careers and power.