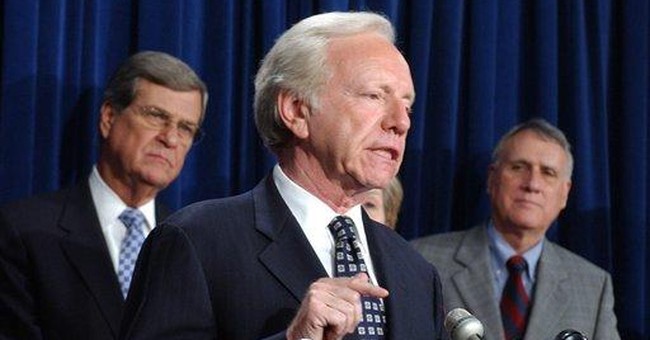 This will probably kill his career, but I rise to praise Sen. Joe Lieberman, the independent Democrat from Connecticut.

In a speech last week before Johns Hopkins University's School of Advanced International Studies, Lieberman said, "Since retaking Congress in November 2006, the top foreign policy priority of the Democratic Party has not been to expand the size of our military for the war on terror or to strengthen our democracy promotion efforts in the Middle East or to prevail in Afghanistan. It has been to pull our troops out of Iraq, to abandon the democratically elected government there, and to hand a defeat to President Bush."

Lieberman doesn't think so, but he stands virtually alone among leading members of his party.

If you consider history, there were many Democrats who supported a vigorous foreign policy dedicated to protecting American liberties and encouraging them in other countries. Those Democrats rarely, if ever, criticized a president of either party for his foreign policies and ex-presidents mostly held their tongues when it came to criticizing their successors. Those days are gone. The late Sen. Henry Martin "Scoop" Jackson, a Democrat from Washington State, was among the last of the modern leaders of his party to believe such things. Jackson, who died in 1983, was awarded the Presidential Medal of Freedom posthumously in 1984. At the awards ceremony, Ronald Reagan said, "Scoop Jackson was convinced that there's no place for partisanship in foreign and defense policy. He used to say, ŒIn matters of national security, the best politics is no politics.' His sense of bipartisanship was not only natural and complete; it was courageous. He wanted to be president, but I think he must have known that his outspoken ideas on the security of the nation would deprive him of the chance to be his party's nominee in 1972 and '76. Still, he would not cut his convictions to fit the prevailing style. I'm deeply proud, as he would have been, to have Jackson Democrats serve in my administration. I'm proud that some of them have found a home here."

One searches in vain for similar sentiments among leaders of today's Democratic Party. When Jackson died, Sen. Daniel Patrick Moynihan, another Democrat of the old school, said of his friend and colleague: "Henry Jackson is proof of the old belief in the Judaic tradition that at any moment in history goodness in the world is preserved by the deeds of 36 just men who do not know that this is the role the Lord has given them. Henry Jackson was one of those men." In his Johns Hopkins speech, Lieberman said of Senate colleagues who voted against his resolution to declare Iran's revolutionary Quds Force a foreign terrorist entity (privately telling him they agreed, but don't trust Bush): "There is something profoundly wrong - something that should trouble all of us - when we have elected Democratic officials who seem more worried about how the Bush administration might respond to Iran's murder of our troops, than about the fact that Iran is murdering our troops." Exactly. God bless Joe Lieberman, a true patriot.