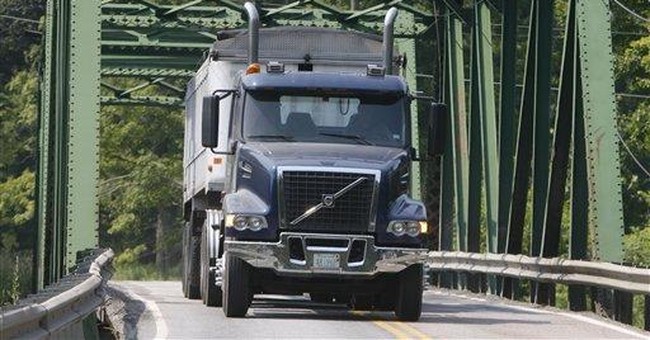 WOODSTOCK, VT. — The Wall Street Journal, no left wing publication, reports that Republicans may soon lose the votes of some economic conservatives. In part, it’s because of the unending war in Iraq and social policies they don’t like, but they might swallow hard and continue to vote Republican anyway if GOP fiscal policies did not mimic the Democrats when it comes to the deficit and spending.

Maybe what the GOP needs is a fall foliage trip to Vermont where there is an oasis in a desert of fossilized ‘60s liberalism. You might not think so at first glance because here, someone seems to have pushed the “pause” button on the Age of Aquarius.

A trip to local bookstores is like visiting Democratic National Committee headquarters. No, that’s not quite accurate. It’s more like visiting MoveOn.org headquarters. Buttons that say “Impeach Cheney First” compete with bumper stickers with messages like “Freedom of Religion Means Freedom FROM Religion” and “Never Have Sex with a Pro-Lifer.”

The most conservative book I could find was one by Jimmy Carter. There are “EmbarrassMints” with a picture of President Bush on the lid of the confection tin. I bought an Elvis Impersonation Kit just for fun. You get the idea.

President Bush has avoided Vermont during his presidency, but he might want to consider leading a pilgrimage of Republican candidates back to a little hamlet just down the road, which produced a Republican president with ideas his party desperately needs.

That hamlet is Plymouth Notch and that president was Calvin Coolidge. Today’s Republicans seem to have an identity crisis. Their focus groups and pollsters have been unable to tell them what they believe. Sen. John McCain is an Episcopalian who wants to become a Baptist, but won’t “convert” until after the election, lest it seem like opportunism. Rudy Giuliani is pro-choice, but promises to name judges who interpret the Constitution as written and doesn’t care if the Supreme Court overturns Roe v. Wade. Fred Thompson believes the opposite of what he said he believed a very short time ago. Ditto Mitt Romney. Those GOP candidates who have been consistent in their convictions — like former Arkansas Governor Mike Huckabee, Sen. Sam Brownback and even Rep. Ron Paul — are back in the pack. Does that say more about us than it does them?

The president ought to visit Vermont and Coolidge’s birth and burial place. It looks pretty much the way it did when Coolidge lived there and visited as president. The state and private contributors (including me as I serve in an unpaid advisory capacity) have kept it that way.

Coolidge has received a bad rap from historians like Arthur Schlesinger Jr., comedian Will Rogers and the columnist H.L. Mencken. But his wisdom survives precisely because it transcends generations. At a time when people are busy looking for “new” ideas, Coolidge — whom historian Paul Johnson has called the last president of the 19th century — speaks immutable truths.

On taxes, how could any modern Republican improve on this pearl from Coolidge: “Collecting more taxes than is absolutely necessary is legalized robbery.”

In a rebuke to the “progressives” who engage in class envy and class warfare, while seeking to redistribute other people’s wealth, Coolidge instructs: “Don’t expect to build up the weak by pulling down the strong.”

There’s something for the “law and order” crowd that might reduce the prison population and improve neighborhood safety: “I sometimes wish that people would put a little more emphasis upon the observance of the law than they do upon its enforcement.”

Maybe that’s why Coolidge warned in his July 5, 1926 speech on the meaning of the Declaration of Independence about the consequences of forgetting things that matter most: “we cannot continue to enjoy the result, if we neglect and abandon the cause.”

Yes, President Bush should lead his fellow Republicans to Vermont to study the thoughts and principles of Calvin Coolidge, though they might wish to stay out of the bookstores.