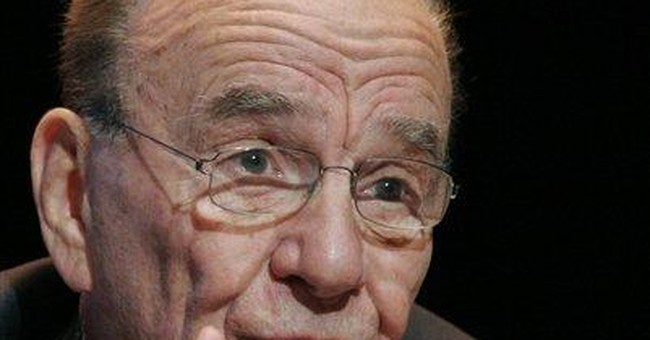 First, the disclaimer: I appear on Fox News Channel, one of Rupert Murdoch's media properties, as a paid contributor. I received neither instructions, nor promises of benefits, in exchange for what I am about to write. We now rejoin our regularly scheduled column.

The grotesque amount of condescension from the elite media concerning the purchase of Dow Jones, which includes The Wall Street Journal, by "media mogul" Rupert Murdoch is astounding. You would think Hugo Chavez had just bought the newspaper with his oil money and announced an immediate tilt to the left. Come to think of it, the elites would not have found that as offensive, because America already has a national newspaper that mostly reflects Chavez's leftist views. It's called The New York Times.

In a nostalgic essay for The Washington Post, David Ignatius wrote about the good old days when he worked for the Journal and expense accounts were as liberal as some of the reporting. Ignatius claims - without proof - "that as the company's economic fortunes declined, so did some of its journalism" and that "The Journal's editorial page increasingly did its own reporting, with equal portions of journalistic hustle and ideological spin, and it often overshadowed the news side," which he suspects "helped undermine the franchise." He speculates, "Advertisers perhaps weren't enthralled with a newspaper distinguished by vitriolic right-wing attack editorials." Never mind that the editorial page editor during the period Ignatius regards as flawed - the late Robert Bartley - won a Pulitzer Prize.

Ignatius ignores the often vitriolic left-wing editorials and columns in The New York Times, a newspaper that has recently suffered from a decline in circulation - even in its core market - and been forced to lay-off staff. I suspect that under Murdoch's ownership, circulation of the Journal newspaper and its online edition will increase and more staffers will be hired, as is now happening with the Fox Business Channel, which is due to premiere in October.

Most of the elite media were of one mind (surprise!) when it came to Murdoch's acquisition of the Journal. NBC's Andrea Mitchell called him "a controversial press lord" and declared Murdoch "deeply conservative," which liberals intend as a slur only slightly less insulting than the label "deeply religious."

The New Yorker's Ken Auletta claimed Murdoch "often" uses "his publications and his media to advance his business or his political interests." Imagine that! The views of New York Times publisher, Arthur Sulzberger Jr., can be read in his newspaper, which consistently promotes policies and people he favors. When you're a liberal, this is regarded by the elites as "good journalism." When you have a different point of view, you are engaging in propaganda and serving only yourself and your interests.

The elite media have been beating up on Rupert Murdoch for years, when they ought to have been addressing the cause of their own decline. Instead, they preferred to indulge in paranoia and denial.

The attacks on Murdoch began in earnest just four months after the debut of the Fox News Channel. In a transcript provided by the Media Research Center of a Jan. 19, 1997 "60 Minutes" broadcast on CBS, Mike Wallace warned ominously that "on Murdoch's new cable channel the news comes with a conservative spin." Who did Wallace cite as his expert authority? None other than CNN founder Ted Turner, who regularly promoted his left-wing views about the Soviet Union, Fidel Castro and other dictators, high taxes, big government, Democrats and environmental activism when he owned and ran that network.

Before Fox News Channel was born, I met with several network news presidents, telling them that someone was going to go after a demographic that felt shutout by the mainstream media. These people, I said, go to church, fly the flag, respect the nation's traditions and institutions and hate the liberal media. They feel censored, or stereotyped, by the media elites. I told them the person who recognizes that demographic and gives them a voice would reap a huge reward.

That person is Rupert Murdoch. He is not the media Satan, as the left likes to portray him. Some of the offensive (to me) tabloid stuff notwithstanding, he just may be the media's savior. The elites hate him, but growing numbers of people are buying his products.