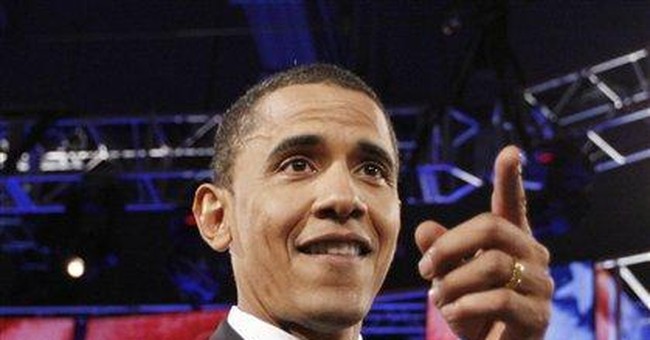 Credit CNN with trying to shake things up in an otherwise dull, exasperating and too-long campaign season with its YouTube Democratic presidential "debate" Monday night. There was a good deal of silliness, like Sen. Chris Dodd claiming he has white hair because he's a hardworking senator (what does that make senators with dark hair, dyed hair or no hair?).

There were also poignant moments, like the woman who suffers from breast cancer wanting to know more about preventive medicine.

As before, this was not a real debate. This was a boring version of "American Idol," or worse, a political rip-off of "The Price is Right" (How much do you think each candidate is worth? Come on down!)

Sen. Hillary Clinton gave the most responsible answer to a question about meeting with dictators like Fidel Castro and Kim Jong-Il (Barack Obama said he would meet with them and other dictators because, "The notion that somehow not talking to countries is punishment to them is ridiculous."). Sen. Clinton said, "I don't want to be used for propaganda purposes," which is a major reason why U.S. presidents don't meet with dictators. It was the correct answer, but even this was a flip from the opposite position she took in April when she said she would talk with those enemies.

The candidates predictably expressed a desire to retreat from Iraq, some faster than others, but none predicted what would follow, or how as president he or she would fight those who wish to kill more of us should al-Qaida take over and use Iraq as a terrorist base.

The problem with televised cattle calls is that the moderator and audience take at face value what politicians tell them. It is as if they are expressing themselves for the first time on every subject and Democrats are rarely asked about contradictory positions they've taken and whether it was conviction, or focus groups, that "converted" them. Republicans are always asked such questions.

Here is one of my follow-up questions: Sen. Clinton, you have repeatedly opposed setting a deadline for withdrawing troops from Iraq, saying as recently as 2005, "I don't think we should be setting a deadline. Š That just gives a green light to the insurgents and the terrorists, that if they wait us out they can basically have the country. It's not in our interests, given the sacrifices we've made." Do you now believe the insurgents and terrorists would not take over the country and use it as a base to come after us here?

Sen. Clinton said she has "worked to bring people together, to find common ground where we can." My follow-up question would have been, "Your husband's former top aide, George Stephanopoulos, wrote in his 1999 book, "All Too Human," "Compromise didn't come naturally to Hillary"; and New York Times columnist David Brooks observed, "Clinton is the only presidential candidate who does not offer a break from the current polarization and bitter partisanship." What do these men see in you that you are trying to hide from everyone else?

Sen. Obama, who likes to remind us he opposed the war before he was a senator, said he wants U.S. combat troops out of Iraq by March 31, 2008. That such a rapid withdrawal is militarily impossible apparently escaped him, just as his earlier statements escaped moderator Anderson Cooper. In a June 21, 2006 Senate speech, Obama said, "Šhaving visited Iraq, I am acutely aware that a precipitous withdrawal of our troops, driven by congressional edict rather than the realities on the ground, will not undo the mistakes. Š It could compound them Š by plunging Iraq into an even deeper and, perhaps, irreparable crisis." Did that crisis evaporate, senator, or are you feeling more heat from left-wing groups like MoveOn.org than our brave soldiers are feeling from the enemy? If you can't stand up to the radical left in America, how will you be able to stand up to radical terrorists?

Politicians should not be allowed to escape past statements and positions, especially when they were once billed as strong convictions. They ought to be required in a debate format to confront those statements and tell the public why it shouldn't believe they weren't convictions at all, but responses to polls and the desire to get elected by whatever means necessary.

Don't look for me to be invited to ask any of these questions in future debates. Politicians rely on the public's short attention span and such questions would expose their lack of sincerity and their view of government as the answer to every human need, except winning the war.