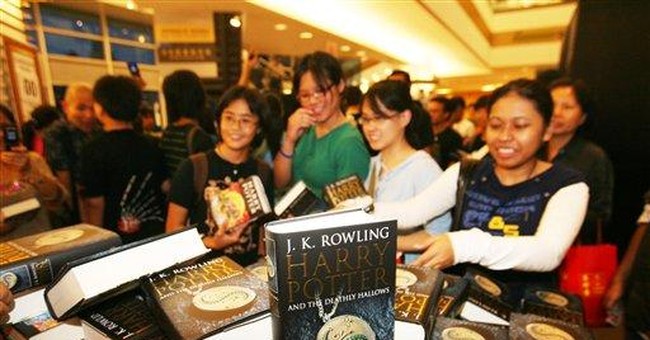 PORTSTEWART, NORTHERN IRELAND - The release of "Harry Potter and the Deathly Hallows," the final book in the Harry Potter series, has momentarily diverted the public's attention from certain realities: The weather, which normally depresses during winter months when there is less sunlight, has been crying unmercifully on Britain, bringing what the Daily Telegraph calls "chaos and misery" as homes are flooded, flights are canceled, or delayed, and train and subway service is disrupted.

A government document obtained by the media reveals that Britain has nearly "run out of troops" to defend the country or fight abroad. The Conservative Party, under leader David Cameron, failed to win the first by-election since Gordon Brown assumed the premiership, coming in third. The Tories appear to have gotten the message not to mimic the Labour Party. A Tory supplement recently published in the Daily Telegraph entitled "Breakdown Britain: A Guide to Our Broken Society and How to Fix It" mainly emphasizes those issues - family breakdown, economic independence, personal responsibility, education choice - the Tories had downplayed in a failed attempt to cross dress as "compassionate conservatives."

Nowhere does Britain's breakdown and loss of direction appear with greater clarity than in the inconsistent ways the courts are treating faith. A nation that has had its ups and down with religion throughout its long history - and is now challenged over how to accommodate its growing Muslim population - appears openly hostile to anything that resembles Christianity and the dwindling number of church-goers who still practice that faith.

An employment tribunal ruled that a Church of England bishop, the Rt. Rev. Anthony Priddis, discriminated against a homosexual man who had applied for a position as a youth worker when Priddis questioned him about his sexual practices and a previous same-sex relationship. The bishop said he asked the man about his lifestyle because it "has the potential to impact on the spiritual, moral and ethical leadership within the diocese." The tribunal ruled the youth worker position falls outside the religious exemptions allowed in the country's Employment Equality (Sexual Orientation) Regulations 2003.

The British media are full of stories about pedophiles, as they have been about Catholic priests, who have preyed upon young boys. In rational times, the sexual behavior of one applying for a youth worker position might seem a plausible line of questioning, but these are not rational times. The court is considering what damages to award the 42-year-old applicant.

Another case that adds to the sense of societal breakdown involves 16-year-old Lydia Playfoot. A court ruled that Playfoot's school is within its rights when it prohibited her from wearing a small "chastity ring" to demonstrate her commitment to remain a virgin until she marries. The court ruled the ring is not a "proper manifestation" of her faith. The Playfoot family must pay $24,699 in court costs for bringing the case against the school. The girl's father, the Rev. Phil Playfoot, said, "This country is tolerant of any views except those of Christians."

As if to make his point, still another High Court has saved a diseased bull from death. A Hindu community worships the bull, named Shambo, and the court said to allow its slaughter would infringe on the human rights of the Hindus to practice their religion. The bull has tested positive for bovine tuberculosis. In keeping with agricultural safeguards, the animal must be destroyed. Evan Thomas, who represents the Farmers' Union of Wales on the Welsh Assembly TB action group, said: "This ludicrous ruling contradicts the principles upon which successful TB eradication programs throughout the world have been based for generations."

A society that forgets what it stands for quickly loses its ability to fight against threats to its existence. The media carry stories about drunkenness, drug use, cohabitation, spousal abuse, rape, child abuse, child abandonment and other threats to societal cohesion.

Britain is broken. The cause runs deeper than the Tories can address, even if they win the next election, which seems unlikely. Repairing what ails Britain will require a higher power than the fictional Harry Potter, or the high courts, which are quickly removing what remains of this country's religious heritage and traditions and practices, offering nothing but chaos in their place, which will have more long-lasting consequences than July's floods.