Hillary on Her Faith 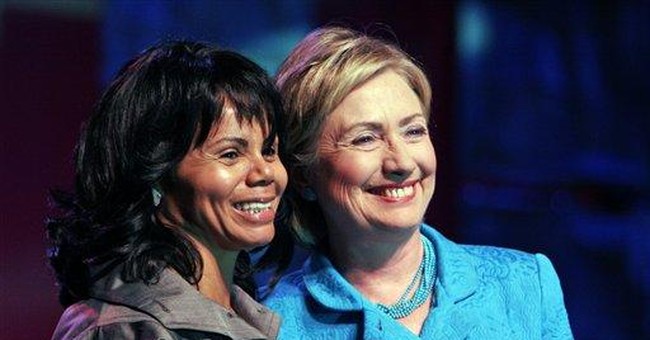 Some unknown author once said, "Everybody should believe in something; I believe I'll have another drink."

Democratic senator and presidential candidate Hillary Clinton took a less cynical and more substantive approach to faith in a recent interview with The New York Times. The quality and depth of one's relationship with God should be personal and beyond the judgment of others, unless one is running for president and chooses to talk about it as part of a campaign plan to win the election.

Democrats have been encouraged and coached by liberal evangelical Christian Jim Wallis of Sojourners magazine to talk about their faith in an attempt to capture a small slice of the religious vote that has mostly gone to conservative Republicans in the last several election cycles.

In a Times' front-page story about Sen. Clinton's Methodist faith, there are pictures of her in Sunday school as a young girl, pictures of two ministers who "influenced Hillary Rodham on faith and social responsibility," and two pictures of her praying.

One of the ministers from her youth, Rev. Donald Jones, says of his messages then, "I wouldn't have focused so much on personal salvation. I would have focused more on social responsibility." In theological circles this is known as "works salvation," the notion that one can do enough good deeds to earn God's approval and enter Heaven. While James, the Apostle, writes "faith without works is dead" (James 2:20), he means that works done as a result of saving faith for the purpose of leading others to that same faith - not for the sole objective of improving one's own circumstances on earth - find approval in God's sight, while works that are separated from a saving faith message are, as the prophet Isaiah says about such human righteousness, like "filthy rags" (Isaiah 64:6).

Even the Times suggests the destination of a strictly "social gospel": "Mrs. Clinton sometimes was a guest speaker at an adult Sunday school class, a class that some members complained normally resembled Rotary Club lectures because it often addressed nonreligious topics." To paraphrase James, if faith without works is dead, so also are works without faith.

Liberal faith, which is to say a faith that discounts the authority of Scripture in favor of a constantly evolving, poll-tested relevancy to modern concerns - such as the environment, what kind of SUV Jesus would drive, larger government programs and other "do-good" pursuits - ultimately morphs into societal and self-improvement efforts and jettisons the life-changing message of salvation, forgiveness of sins and a transformed life.

If the newspaper story is accurate, this is where Mrs. Clinton is on her faith: "In a brief quiz about her theological views, Mrs. Clinton said she believed in the resurrection of Jesus, though she described herself as less sure of the doctrine that being a Christian is the only way to salvation."

This is a politician speaking, not a person who believes in the central tenets of Christianity. The same book that tells of the Resurrection, also quotes Jesus as saying "I am the way, the truth and the life; no one comes to the Father but by me" (John 14:6). One might ask, which the reporter did not, that if there are other ways to God than through Jesus, why did He bother to come to earth, allow Himself to be crucified and suffer rejection? He might have stayed in Heaven and told people about a spiritual GPS system that would get them there another way.

About the accuracy of Scripture, Sen. Clinton serves up theological mush: "The whole Bible gives you a glimpse of God and God's desire for a personal relationship (good, so far), but we can't possibly understand every way God is communicating with us. I've always felt that people who try to shoehorn in their cultural and social understandings of the time into the Bible might be actually missing the larger point."

That is precisely the point of liberal Christianity, to which Sen. Clinton subscribes.

Sen. Clinton is entitled to whatever faith she wants to practice, but when she uses it as an election tactic, she should not be allowed to alter classic Christian theology.