The Cost of Failure 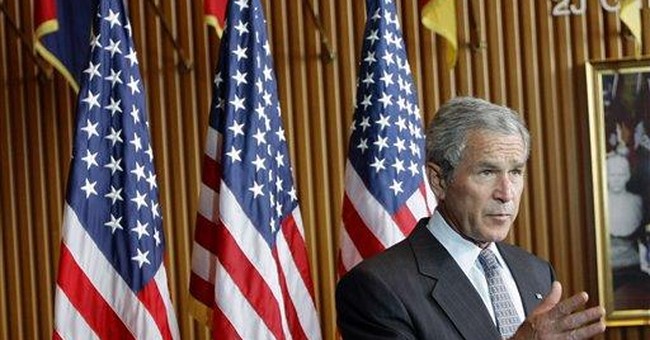 If you believe the Bush presidency is a failure, what then? Do you delight in whacking him like a piñata for the next 18 months with your only objective a Democratic blowout victory in the 2008 election? If that is your strategy, do you ask yourself what kind of country a Democratic president will inherit and whether he (or she) will have the ability to quickly turn things around after months of pummeling a weakened president?

Or, if you are a Democrat, do you - could you - rise above the partisanship and gain enormous amounts of goodwill and even greater political capital by putting the country's health ahead of your political agenda? Suppose this 18-month period of weakness emboldens our enemies and leads to another terrorist attack. Surely even the most partisan among us would not rejoice over that.

Politics has always been a contact sport, but in the past - even during difficult times - there were those who transcended partisanship, putting the country first. In her book "Team of Rivals," Doris Kearns Goodwin writes of how Abraham Lincoln brought his severest critics into his administration to work with him, not against him, for the promotion of the general welfare.

This is a foreign notion in our day of 24/7 cable news, talk radio, fundraisers and polarizers. These exist and profit from stirring the pot, never achieving harmony or consensus. Each has a vested financial, political and career interest in division, not unity. A fundraiser once told me he can't raise money by sending out letters stressing positive achievements, only negative threats. And thus, the cynicism deepens.

Liberal blogs are full of hatred for President Bush (as conservative media once were for President Clinton). They are beyond debating his policies, instead devolving into condemning him to political and literal hell. While that might make bloggers feel good and occupy their time until the next election, does it strengthen the nation against multiple threats? Can we afford this "luxury," if that's what it is, or would we be better served by political leadership that steps in, not to cause further harm but to do greater good?

Since he has nothing to lose at this point with his approval ratings at record lows, the president might wish to consider the high road. Nothing is to be gained by further swagger and bluster, but much might be accomplished from a genuine reaching out to Democrats, including some of the more responsible ones, during the remainder of the Bush presidency. Ronald Reagan kept a saying on his desk: "There is no limit to what a man can do or where he can go if he doesn't mind who gets the credit." That attitude might work for President Bush.

The president should name a panel of prominent Democrats and Republicans to help him during the next 18 months. That assistance would not be for the purpose of making him look better, but for tackling difficult problems that partisanship has not solved. He might call it "Americans United," or some other high-minded name that would elevate dialogue beyond the reach of partisan dividers. Didn't he say once that he is "a uniter, not a divider"? This could help him prove it.

Humbling oneself can be difficult, especially for a president, but the rewards would be substantial and beneficial to the country. Leadership is something that is conveyed by the people, not imposed by the leader. If people trust you, they are willing to be led. If they don't, they rebel at your sense of direction, or they conclude you have lost your way. That is the conclusion an overwhelming majority of Americans - including many Bush voters and former supporters - have reached concerning this president and his presidency.

Assembling a group of respected Republicans and Democrats, bypassing the rank partisanship of the Democratic congressional leadership, and declaring his final months in office will be dedicated solely to attempting to do what's right for the country and not for Republican advantage in the next election might - if successful - have the incidental benefit of helping Republicans in 2008. That must not be seen as the motive, or any attempt at consensus will fail.

Go on and try it, Mr. President. There isn't much left to lose. The nation cannot afford the cost of failure.