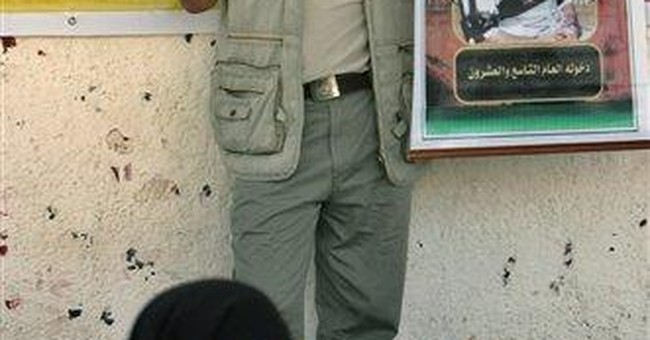 Sometimes, for those who pay attention, the stars align and produce spectacular effects in the cosmos and on earth. A similar effect can occasionally be produced through journalism.

On June 26, the Washington Post featured three stories on its World News page that should teach a lesson to anyone who wishes to pay attention. The top story was headlined, "Olmert Makes ŒGesture of Goodwill': At Summit in Egypt, Israeli Leader Pledges to Seek Release of 250 Palestinian Prisoners."

The story just below featured this headline: "Israeli Soldier, on Tape, Pleads for Prisoner Swap: A Year After Capture, (Gilad) Shalit Says He Needs To Be Hospitalized."

The third story's headline was "Hope Dims For Imminent Release of BBC Reporter."

Is Olmert self-deluded, or merely dumb, when he promises to engage in one more in a long list of "goodwill gestures" that have produced no reciprocity from Israel's enemies? I'm leaning toward the latter.

When Israel has previously released prisoners who were captured because many of them had killed, or tried to kill, Israelis, many returned to the company of their jihadist brothers and plotted to kill again. On occasion, Israel might have received one kidnapped Israeli soldier or civilian hostage in return for freeing hundreds of prisoners, but mostly it got nothing.

During Olmert's visit to Washington last week, I asked a "senior Israeli official" if he had tried to persuade Palestinian Authority Chairman Mahmoud Abbas to eliminate the outrageous programming on Palestinian TV, which regularly glorifies suicide bombers and calls for the killing of Jews and the elimination of Israel. The official, who requested anonymity as a condition for speaking, said, "I have made the request before" but without results. If Abbas will not order the cessation of anti-Semitic programming on the TV station he controls, what makes Olmert think the release of 250 Palestinian prisoners will make him more agreeable to anything intended to ensure Israel's survival?

In a telephone interview, former Israeli Prime Minister Benjamin Netanyahu told me, "Abbas doesn't have what it takes by himself" to stabilize the West Bank and that Jordan, along with Egypt, must serve as part of an "external scaffolding" in partnership with Israel to counter Hamas in the West Bank. Netanyahu opposes Olmert's prisoner release idea, saying, "This is a wrong, harmful message that will not strengthen the Palestinian Authority. It will only weaken it." In Washington meetings with Vice President Dick Cheney and Sen. Hillary Clinton (D-NY), Netanyahu said a division of the Jordanian military should be deployed in the West Bank in order to bring law and order to the area. Netanyahu described Palestinian society to me as "dysfunctional" and said something must be done to "control the mobs."

Israel has made man goodwill gestures, and after each one Israel has become more vulnerable. How about a goodwill gesture from the Palestinian side, such as foreswearing violence and living up to their promises?

What is wrong with Israel's leadership, and much of the leadership in the West, that it believes peace is only a matter of finding the right formula to satisfy the Palestinian side and the Arab states that seek Israel's destruction? Israel's enemies (who are mostly America's enemies, too) care nothing about goodwill, reciprocity, equality or a two-state solution to the turmoil. They want a one-state solution, which is the replacement of Israel with a Palestinian state.

Can anyone credibly argue otherwise? Is there any substance to such an argument, beyond wishful thinking?

Outgoing British Prime Minister Tony Blair recently appeared before the Parliament Liaison Committee. Though he was speaking of Iraq, his remarks could apply to the threat to Israel. Blair argued that the West needs to free itself of the habit of mind that believes the violence we see in Iraq and elsewhere is created by the United States, Great Britain, and Coalition forces. He said, "We think we are creating this problem; we are not creating it, it is being created for us."

Perhaps Blair should move to Israel and run for prime minister there. He gets it; Olmert doesn't.