What's Faith got to do With It? 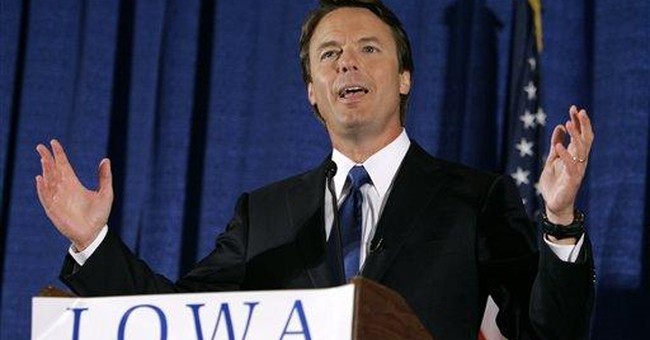 The top three Democratic presidential candidates participated in a forum Monday on the connection between their religious faith and political positions. The unusual gathering, broadcast live by CNN, was co-hosted by Sojourners, a Christian social justice network.

Rev. Jim Wallis, editor-in-chief of Sojourners magazine, and an organizer of the forum, has been telling Democrats not to cede religion to Republicans. He has spoken at several Democratic Party retreats, teaching Democrats how to speak about faith.

Sen. Hillary Clinton, John Edwards and Sen. Barack Obama mentioned faith in a generic way, baptizing their liberal politics and suggesting that God favors their positions more than those of the Republicans'. Republicans behave similarly, but they've been at it longer and perform better on the religious stage than Democrats.

One shouldn't expect politicians to be theologians, but if they are going to talk about their faith publicly, more depth should be required. Obama said, "I am my brother's keeper." The reference is to Genesis 4:9. Cain has just murdered his brother, Abel, and God asks Cain, "Where is Abel your brother?" Cain responds with a lie: "I do not know; am I my brother's keeper?" Obama is applying that verse to government, which liberals often see as God-like in its distribution of welfare payments and other goodies.

Sen. Clinton said her faith had sustained her during Bill's extramarital affairs (a nod to the numerous biblical injunctions against adultery and infidelity). She also linked her faith to health care and in a twist on Psalm 139 and other verses that teach God knew us even while we were being formed in our mother's womb, repeated Bill's 1992 campaign pledge to make abortion "safe, legal and rare." She added, commendably, "The pro-life and pro-choice communities have not really been willing to find a common ground, and that is a great failing on all our parts." She offered to work with religious leaders to bring the two sides together. One longed for a follow-up question as to how government can, or should, apply the principals of her faith in the area of abortion, since to make it "safe, legal and rare" implies a value to the unborn that abortion on demand fails to acknowledge.

John Edwards said he had "strayed from the Lord for a period of time," but that "my faith came roaring back" after his teenage son was killed in a car accident in 1996 and it remains a comfort as his wife battles incurable cancer.

The forum was interesting as political theater, but the leading Democratic presidential contenders gave no indication that if their faith ever conflicted with their political point of view they would choose what their faith taught them over what focus groups tell them. And that's what makes this exercise - as noble as Jim Wallis and others might see it - rather futile.

Americans have traditionally wanted their presidents to believe in a "higher power," even if they don't care what faith it is, as Dwight Eisenhower famously remarked. American history is loaded with religious language and references to "Divine Providence." Democrats and Republicans have utilized religiosity and calls to prayer to justify war, unify the country and promote peace. But as Jim Wallis correctly noted: "The people of God should never be in the pocket of any political party or candidate." If so, it makes one wonder the point of these forums (a similar gathering of the top three Republicans is scheduled for the fall).

In the Democratic forum, neither questioners nor candidates suggested that individuals bear primary responsibility for their lives and that government policy should be directed toward fostering personal responsibility and accountability for wrong decisions as an incentive for making right ones.

The Apostle Paul said, "If a man will not work, he shall not eat." (2 Thessalonians 3:10). The threat of an empty stomach is the best incentive for providing for one's self. Government should serve as a last resort, helping the truly needy, not as a first resource subsidizing laziness and wrong decisions.

Most of this God-talk by politicians is irrelevant. We're not electing a theologian, but a president. There are many moral and godly people in my church who I would trust with my wife, but with possibly one exception, not the country. Competence, not ideology or religiosity, should be primary in this election.