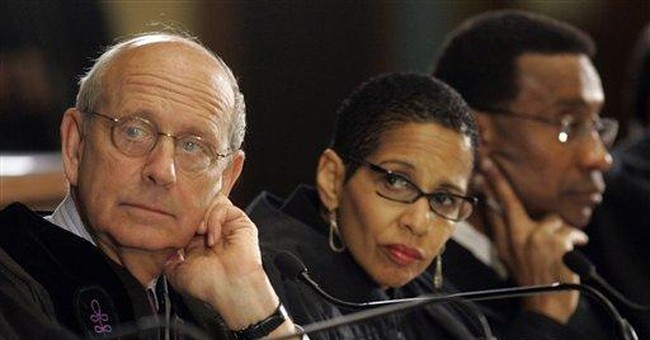 Last week, there were two stories about carnage - the tragedy at Virginia Tech and the Supreme Court's decision on partial-birth abortion.

At Virginia Tech, 32 people were killed. The worst of the pictures were kept from us, but we saw enough, as bleeding students and faculty members were carried out of the buildings. There were no pictures released of what some witnesses described as blood and gore on the floors and walls of the classrooms where Seung-Hui Cho performed his evil deeds. No dead bodies were shown.

Also, by a narrow 5-4 vote, the Supreme Court upheld the constitutionality of a federal law prohibiting partial-birth abortion, a procedure in which a mostly delivered and fully developed baby has its brains vacuumed out. The Court reached its decision even though the law lacks a "health" exception, which has been a legal loophole large enough to drive any abortion through and which has fueled abortionists who claim that the pregnant woman's mental or some other "health" is in danger, thus "justifying" the abortion.

While pro-lifers welcomed the decision (it is the first to prohibit an abortion procedure since Roe vs. Wade in 1973), the language used by Associate Justice Anthony Kennedy in his majority opinion is inconsistent. In the past, Kennedy has voted to uphold Roe vs. Wade and has opposed other attempts to restrict abortion, but his opinion in the partial-birth case may open the door to further regulations on abortion Š or not. What Kennedy wrote illustrates that the Court is not yet ready to overturn Roe: "Where it has a rational basis to act, and it does not impose an undue burden, the State may use its regulatory power to bar certain procedures and substitute others, all in furtherance of its legitimate interests in regulating the medical profession in order to promote respect for life, including the life of the unborn."

Kennedy seems to be saying that if abortionists can use means to kill a baby other than by partial birth, it's OK with him. And what's this about promoting "respect for life, including the life of the unborn"? Abortion on demand has produced precisely the opposite of Kennedy's stated objective. It has eroded respect for life to the extent that madmen shoot up schools and street thugs kill for pleasure.

The American College of Obstetricians and Gynecologists called the Court's decision "shameful and incomprehensible." What is shameful is the systematic and legal destruction of more than 46 million babies in the United States since 1973, according to the pro-choice Alan Guttmacher Institute. What is incomprehensible is a society that would allow for the destruction of a generation, depriving the nation of talent and unknown contributions.

There is an inverse connection between the carnage at Virginia Tech and the carnage that is abortion. With Virginia Tech, we saw pictures of the bloody wounded. Survivors told us the rest. With abortion, especially the partial-birth kind, the most we get are drawings. The full horror of what happens during the procedure and the failure to inform women about it and its alternatives has never been shown on television, or published in newspapers.

Justices Antonin Scalia and Clarence Thomas remain consistent in their opinions that the Constitution contains no language allowing abortion, or prohibiting states from regulating it. They have been in the minority, but perhaps not for much longer. The 5-4 decision shows that a crack has developed in the abortion wall. That's why the next election and the next justice appointed will be critical.