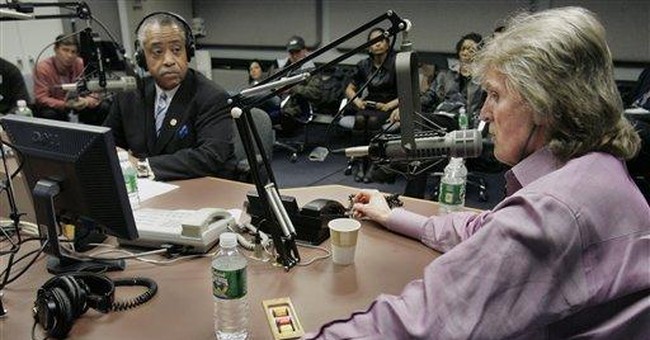 Talk show host Don Imus has been fired from the CBS Radio Network and MSNBC has dropped the simulcast of his "Imus in the Morning" show because the shock jock touched the "third rail" of free speech: he insulted African Americans, some of whose self-appointed "leaders" have a direct line to the media to express their outrage. In the past, networks have stood against onslaughts from conservative political and religious groups outraged by program content, but they quickly cave when confronted by campaigns led by Rev. Al Sharpton and Rev. Jesse Jackson.

Imus' remarks about black women on the Rutgers University female basketball team were the same kind of stuff (and worse) that one can hear in hip-hop "music." Hip-hop "artists," who are mostly black men, frequently demean black women. Their lyrics approve of rape and other violent acts against black women, who are referred to as "hos" and "b———," and other names that cannot be printed here.

Imus' comments about the Rutgers women were offensive by the standards that used to exist in America. The hypocrisy comes when people who have "pushed the envelope" beyond what used to be called acceptable boundaries of taste and community standards now appeal to the standards they helped to eliminate. Corporate executives who trade in the worst of the hip-hop filth are not required to apologize or stop polluting the airwaves as well as minds and hearts with their filth. That's because it makes them gobs of money and money covers a multitude of "sins."

The hypocrisy extends to Jesse Jackson, who appeared on Fox News Channel. In an interview with John Gibson, Jackson criticized Imus for his remarks. It would have been a good moment for Gibson to ask Jackson if he felt empathy for Imus, since Jackson once called New York City "Hymietown," which many regarded as an anti-Semitic slur, but Gibson did not bring it up.

Like Michael Richards, who launched a racist tirade at an audience member during a stand-up comedy routine, Imus is now doing the apology tour. He groveled on Sharpton's radio show, saying he meant no offense and acted as priest and penitent by declaring himself "a good man."

It will never satisfy until people whose careers are built on taking offense have extracted his last pound of flesh and worn out their welcome on the cable TV shows. That will happen when the media tire of the Anna Nicole Smith story.

Where are the First Amendment defenders in all this? They have fled Imus as if he's radioactive. Jackson suggested that the famous journalists who appear on Imus stop showing up in order to register their displeasure over his remarks. Will they? Most are liberals who might be expected to share the outrage over Imus' comments. But all have egos and the stroking they get from Imus, along with the feedback they receive from those who matter to them, may overcome any reluctance they might otherwise have to appear on his show.

During the 1980s, social conservatives who tried to control pornography, including that subsidized by the National Endowment for the Arts, were told such things were the price we must all pay for a "healthy First Amendment." Artists must be free to express themselves. If certain people object to what is on TV, they can change channels, or turn it off.

Why aren't these keepers of the First Amendment flame coming to the defense of Don Imus? It's because they have a double standard. Evangelical Christians, practicing Roman Catholics, politically conservative Republicans, home-schoolers and others who are not in favor among the liberal elite are frequent targets for the left. Anything may be said about them, and it frequently is. But let someone insult the left's "protected classes," be they African Americans, homosexuals or to a lesser extent, adherents to the religion of "global warming," and they must be silenced and punished.

Was Don Imus racially insensitive and offensive? According to my standards, he was. But my standards no longer matter. They have been thrown overboard in favor of a different philosophy. Call it "Anything Goes." Look up the lyrics to that classic Cole Porter song and you have the mentality that passes for contemporary communication and entertainment.

If the Imus case went to trial, no jury in the land would convict him because the prosecutor would not have a universal standard by which to hold him accountable.