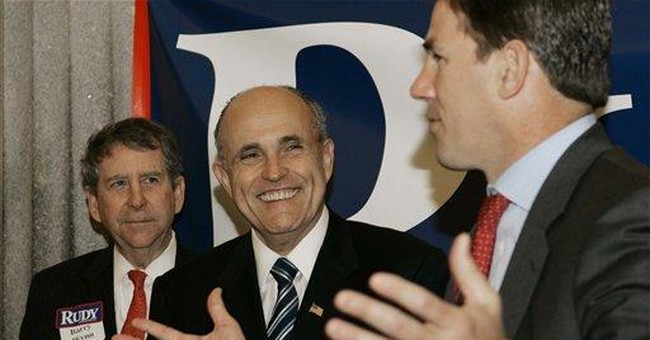 Rudy Giuliani is playing the role of a contortionist in his attempts to convince enough pro-life voters to support his presidential candidacy.

After an unblemished record as a pro-choice mayor of New York City (if you don't count the "blemish" of babies not allowed to live), Giuliani surprised a lot of people when he said if he is elected president he would name only "strict constructionists" to the Supreme Court. That sounded pretty good to some, until Giuliani added last week during a CNN interview that he thinks a person who believes the Constitution should be interpreted as written could also vote to uphold Roe v. Wade and that he supports public financing of abortions for poor women who want them.

Twisting himself even further, Giuliani said denying a poor woman tax dollars to pay for an abortion would deprive her of a "constitutional right."

While the Constitution guarantees freedom of speech and a free press, it does not follow that the government should buy me a newspaper if I can't afford one. And as a strong supporter of Roe v. Wade, why would Giuliani name judges who oppose it? Would a pro-life candidate be credible if he promised to name only judges who read into the Constitution whatever he or she wished?

Giuliani claims that Roe v. Wade established a "constitutional right" to abortion. The Court, unable to find that "right" clearly stated anywhere in the Constitution, finally concluded that it was implied in either the 14th Amendment, which protects ones right to privacy, or in the "penumbra" of the Bill of Rights.

Abraham Lincoln dealt with the danger of reading into the Constitution ideas and supposed rights that are not there in his brilliant speech at Cooper Union in New York on Feb. 27, 1860. Addressing the issue of slavery and whether it should it be allowed to spread to territories outside of those states in which it was then practiced and rebutting Sen. Stephen Douglas' assertion that the Founders intended "popular sovereignty" to determine such things, Lincoln said: "An inspection of the Constitution will show that the right of property in a slave is not Œdistinctly and expressly affirmed' in it (Chief Justice Roger Taney's majority opinion in Dred Scott contends that it was). Bear in mind, the Judges do not pledge their judicial opinion that such right is impliedly affirmed in the Constitution; but they pledge their veracity that it is Œdistinctly and expressly' affirmed there - Œdistinctly,' that is, not mingled with anything else - Œexpressly,' that is, in words meaning just that, without the aid of any inference, and susceptible of no other meaning."

Lincoln's point was there are no distinct words in the Constitution expressing the right of a human to own another human. The Taney Court had to misread the Constitution in order to assert such a "right," which is what the Court did in Roe v. Wade a century later.

Giuliani says people who don't like his position do not have to vote for him. Many social conservatives who view abortion as a make or break issue are likely to follow his advice.