All the Ex-President's Money 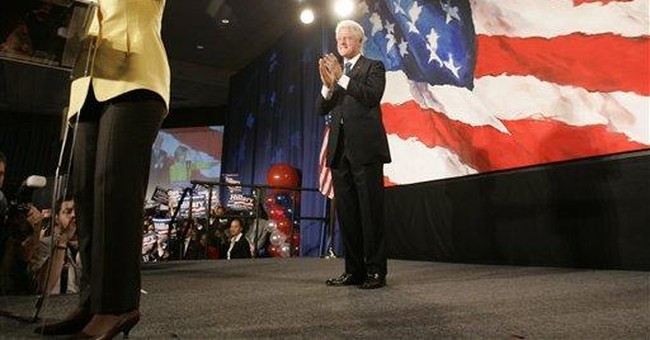 Former President Bill Clinton is one of a kind, but we knew that already.

No president before him has managed to cash in from his time in office with such shameless abandon.

A Washington Post story by John Solomon and Matthew Mosk is staggering in its revelations of Clinton's greed. In the six years since he left the presidency, Clinton has taken in nearly $40 million - between nine and 10 million of it last year. Clinton averaged "almost a speech a day" in 2006. Twenty percent of his fees reportedly "were for personal income." The rest of his speeches, says the Post, were for no fee or for donations to Clinton's foundation.

Unlike liberal Democrats, I am not obsessed with how much others make, as long as it's honest money and they pay their taxes. It ought to be a concern, though, when so much money is paid to a former president by foreign governments, foreign entities and corporations with interests in U.S. foreign and domestic policies. While Bill Clinton is no longer in a position to determine such policies, his wife, the junior senator from New York and Democratic presidential candidate, is and she may soon be in an even more powerful position. Given the Clintons' history of questionable political, business and personal relationships, can anyone say with certainty that the providers of this largesse are uninterested in influencing a President Hillary Clinton through her husband?

Were it not for the disclosure forms required of high-level officials, we might never have known the full extent of the Clinton ATM (always throw money) machine.

Clinton is also a master at whiny self-justification, saying, "I never had a nickel to my name until I got out of the White House, and now I'm a millionaire. Š I get a tax cut every year, no matter what our needs are."

Clinton can easily assuage his conscience by writing a check for the taxes he thinks he should pay under a Hillary Clinton administration and send it to the U.S. Treasury, but that would require him to be sincere. Clinton told a Houston fund-raiser in 1995, "Probably there are people in this room still mad at me at that (1993) budget because you think I raised your taxes too much. It might surprise you to know that I think I raised them too much, too." Sincerity, like fidelity, is not his strong suit.

It's not as if Clinton's speeches are imparting anything new to his audiences. People are paying for celebrity, proximity to a former president and possibly a future one. After one hears Clinton's riff on the supposed shortcomings of his successor, the "failure" of the administration's policy in Iraq and whatever he proposes to solve the world's problems, there is little else. Why would anyone pay so much to hear so little?

Other than greed, what is the primary motivation behind Bill Clinton's massive cash-in? The answer is suggested in the Post story: "Šit allows (the Clintons) to tap into that wealth for a campaign if Hillary Clinton, as expected, forgoes public financing in her race for president. It also suggests a sometimes close connection between their personal finances and her political career." What else is new?

The Clintons are plowing new ground. Ethics and election laws should keep pace. Never before has the spouse of a former president run for president. One of the reasons for disclosure forms is to ensure no improper influences are exerted on public officials by outside groups, or governments. Among those for whom Clinton spoke were a Saudi Arabia investment firm ($600,000 for two speeches), a Chinese real estate firm, run by a Communist Party official ($200,000), and a Toronto company, founded by a Kenyan immigrant who was convicted of stock fraud and barred for life from the brokerage business ($650,000 in 2005 and an undisclosed sum last year). The public needs to know more about their backgrounds.

While other ex-presidents have spoken for money, there has been nothing on this scale and none of their spouses served as elected officials.

If the new Democratic congressional leadership is serious about living up to its pledge of a far more ethical body than the one run by Republicans, the Senate Ethics Committee will get on this right away. There ought to be an investigation into the associations and ties of especially foreign governments and interests who paid these big bucks to Bill Clinton.