Hillary is no Bill 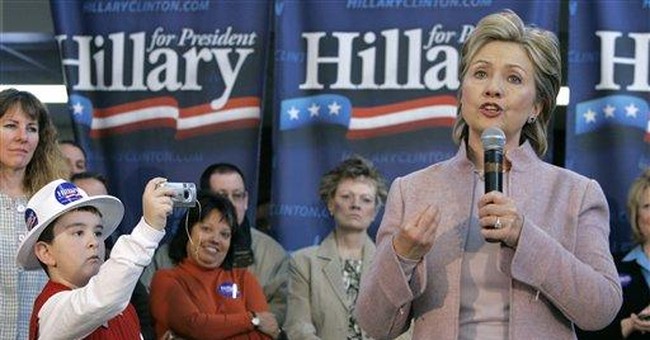 When it comes to flipping on an issue and making you believe he never said (or did) what, in fact, he said (or did), no one can top Bill Clinton. He makes you want to believe him because he is such a good old rogue with a unique gift of persuasion. Had he not been selling himself to voters, readers of his book and audiences at six-figure honorariums, he might have been the top salesman at any car dealership in the country. Bill Clinton could sell snowmobiles to Miamians.

Not so with Hillary Rodham Clinton, who thinks the Democratic Party notion of entitlement entitles her to be president. We are asked to believe that this woman is the most intelligent female in America, a person with deep convictions, unique vision and the experience to lead the nation in troubled times.

In Iowa last weekend, Sen. Clinton showed why she shouldn't - and I believe won't - be president. She deliberately misled the audience about her vote to authorize President Bush to use force against Saddam Hussein. The big media has, so far, ignored her flip in favor of pursuing their storyline about the "historic" progress women are making in politics. But thanks to YouTube and other Internet sites, Sen. Clinton will not be able to escape even her recent past.

Last weekend in Des Moines, Sen. Clinton attempted to explain her 2002 vote in favor of a Senate resolution "to Authorize the Use of United States Armed Forces Against Iraq" (S.J. Res. 45): "I said that we should not go to war unless we have allies. So (President Bush) took the authority that I and others gave him and he misused it, and I regret that deeply. And if we had known then what we know now, there never would have been a vote and I never would have voted to give this president that authority."

Speaking to the left wing, anti-war organization, Code Pink, on March 7, 2003, which can be found on YouTube, Sen. Clinton tried to justify her pro-war vote: "There is a very easy way to prevent anyone from being put into harm's way, that is for Saddam Hussein to disarm. And I have absolutely no belief that he will. I have to say that this is something I've followed for more than a decade. If he were serious about disarming, he would have been much more forthcoming. Š I ended up voting for the resolution after carefully reviewing the information, intelligence that I had available, talking with people whose opinions I trusted, trying to discount the political or other factors that I didn't believe should be in any way part of this decisionŠ"

Sen. Clinton also told the Code Pink women that sometimes the United States has to go it alone and she specifically compared Iraq with Bosnia and Kosovo "where my husband could not get a Security Council resolution to save the Kosovar Albanians from ethnic cleansing. And we did it alone as the United States, and we had to do it alone."

So much for the necessity of seeking allies and additional UN resolutions to follow previous unheeded resolutions before America acts.

In her Senate floor speech on Oct. 10, 2002, Sen. Clinton said, "It is clear that if left unchecked, Saddam Hussein will continue to increase his capacity to wage biological and chemical warfare and will keep trying to develop nuclear weapons. Should he succeed in that endeavor, he could alter the political and security landscape in the Middle East, which as we know all too well affects American security." Later in that speech, Sen. Clinton criticized the UN, saying, "It often lacks the cohesion to enforce its own mandates." Adding to her conviction that Saddam must be toppled, Sen. Clinton said, "I want this president, or any future president, to be in the strongest possible position to lead our country in the United Nations or in war."

One wonders what took such a smart woman until last weekend in Iowa to conclude that she had been duped and, if she can be misled by so many people in whom she has confidence, how will she be able to see clearly as president?

Unlike her husband, she won't be able to get away with the political equivalent of "of course, I'll respect you in the morning."